“I don’t know the last time I’ve seen a community with so many groups come together. This is a unification of a group of people and a community that all recognize the value of what we’re doing.”
Jun 11, 2021 12:00 PM By: Tyler Klinkhammer 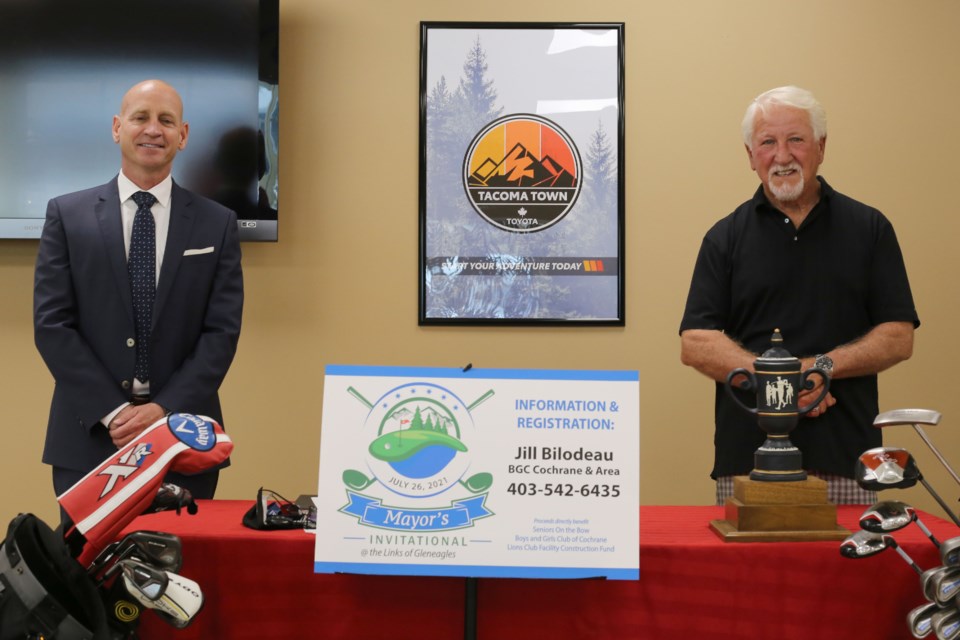 COCHRANE— In hopes of raising some funds for a brand-new senior’s centre, Boys and Girls Club and Lions Club event centre in town, Mayor Jeff Genung will be hosting the first-ever Mayor’s Invitational golf tournament on July 26 at the Links of GlenEagles Golf Course.

At a press conference on Friday (June 4), Genung announced his plans for the new event centre from Cochrane Toyota’s public events room.

“Exciting news to share today, it’s something I’ve been talking about, at least internally in my mind, for the last couple of years, wanting to do a golf tournament. Obviously, COVID has gotten in the way of that, but with the unprecedented year— Maybe 14 months that we’ve had— People are just so excited to get outside and this day that we have planned will allow that to happen,” he said.

In 2017 during the last municipal election, Genung said, his mother accompanied him to a candidates’ forum at a local senior’s facility. He said the facility was difficult for his aging mother to navigate.

“I had to drag her along the long hallways, up the stairs, down the hallway, and actually it just wore her out, and she had to go home early. It was not intentional, but the impacts of that have been weighing on me for, actually the whole term that I’ve been mayor, and we need to do something about it” he said. “Action is what this golf tournament is all about.”

He said that event has weighed on his mind ever since, and was the inspiration for a brand-new events centre that would be accessible to all Cochranites.

“We’ve done some work as a municipality to kind of do the groundwork of where it would go in our community but we’ve kind of stalled out with COVID and how our budgets have been laying out,” he said. “Now is the time, we thought, with the golf tournament lining up with the provincial restrictions being eased off, maybe we could find the funds for this great initiative and do some fun things, get the community together and get this built.”

Genung said local philanthropist Dan Kroffat has been helping behind the scenes to get golfers on to the links.

“I was attracted to this because this initiative really represents a little of myself,” Kroffat said. “At 75-years-old I too look at what’s happening in the world of seniors and the advancement. The timing of this project is really quite remarkable. When you take into consideration that, actually, the baby boomers are moving into a time frame where senior’s centres and senior’s outlets will become more critical and important in their lives. I think the timing of this, I think the mayor’s initiative here, is going to be instrumental in meeting the needs of seniors over the next number of years.”

“We have all of the major community groups going to pitch in and support this great cause in building a new senior’s centre, multimillion-dollar seniors centre, Boys and Girls Club, which are now called the BGC of Cochrane and Area and the Lions Event Centre ... I don’t know the last time I’ve seen a community with so many groups come together,” Kroffat said. “This is a unification of a group of people and a community that all recognize the value of what we’re doing.”

The new facility is to be installed across from the McDonalds on Fifth Avenue, where the old swimming pool used to sit.

“The land is ready. Council, the mayor, everyone is in position,” Kroffat said.

Genung said while the major focus of council has been on infrastructure-related projects in recent months he does not want to forget about the residents.

The event centre will bring together the seniors in the community and the youth who will take the reins and continue to build on the foundation left behind by their parents and grandparents, he said.

“With the unprecedented growth that Cochrane has seen over the past few years, it’s no secret, residents have been really on council and myself in particular about the traffic. It’s right in your face so it’s really easy to respond and react to that, and council has. It’s a priority and we’re starting the 1A project this year. But I don’t want people to get left behind in all of that,” he said. “It’s really about our past, and recognizing those instrumental seniors, and then, also investing in the future with the youth. This project, I feel, has got it all.”

The Mayor’s Invitational is still looking for sponsorship and support, Kroffat said.

On the day of the tournament, there will be activities, speeches, a dinner, celebrity and dignitary appearances. More details are expected to be announced in the coming weeks.