More than $15,000 in items stolen from Rebel Comics

“They just smashed the front window in, hopped through and just grabbed as much as they could,” Petitclerc said. “It was a nightmare.”
Mar 3, 2021 3:00 PM By: Chelsea Kemp 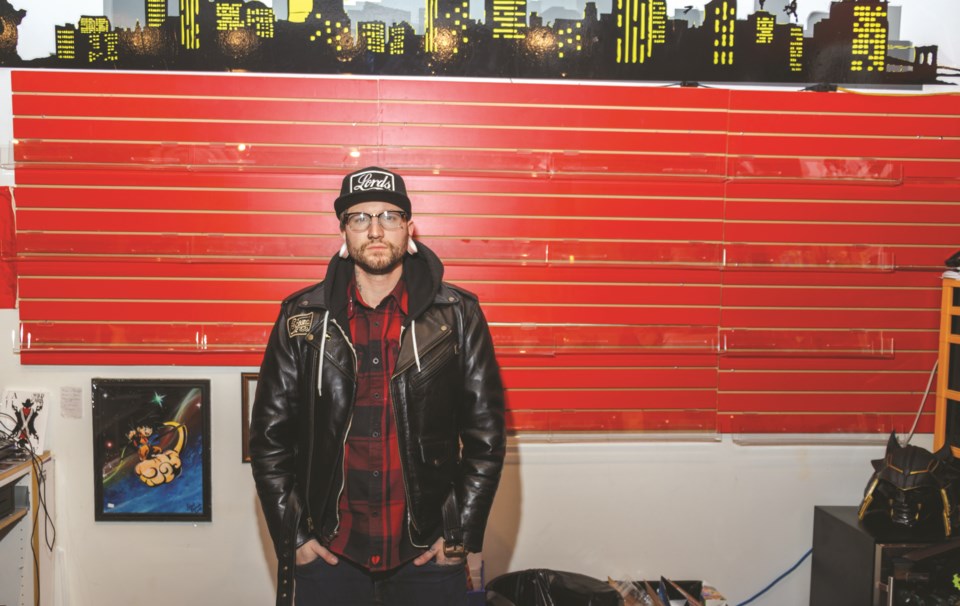 Rebel Comics owner Devin Petitclerc stands in front of shelves emptied by thieves on Sunday (Feb. 28). Petitclerc estimates $10,000 to $17,000 in goods was stolen from the store. (Chelsea Kemp/The Cochrane Eagle)

Owner Devin Petitclerc said it was shocking to arrive at the shop and find the front window had been smashed and a collection of rare key-issue comic books, Pokémon cards, Magic: The Gathering cards, video games, graphic novels and figurines had been stolen.

“They just smashed the front window in, hopped through and just grabbed as much as they could,” Petitclerc said. “It was a nightmare.”

Based on surveillance tapes from the store the break and enter occurred around 1:30 a.m. A neighbouring business reported an older model Honda Ridgeline has been spotted suspiciously circling the parking lot earlier in the evening.

Video footage was taken of two suspects involved in the theft. The faces of the suspects were covered, but the physique and stature are visible.

Petitclerc noted the break and enter was especially concerning as the thieves were able to navigate the shop in the dark.

“I think they definitely have been here before because they did it all in the dark. They didn’t turn the lights on or anything,” Petitclerc said. “They didn’t have a flashlight they knew exactly what they were looking for and where it was— It’s pretty messed up.”

Petitclerc’s dad was at the shop Sunday afternoon covering the broken window with plywood until the new glass could be installed.

Petitclerc has informed the RCMP, his insurance company and has contacted comic book stores in the Calgary area to let them know which issues were taken.

“Hopefully we can solve this,” Petitclerc said.

While the damage to the shop will hopefully be minimal, Petitclerc said, it will take time to rebuild the rich collection of items that once called Rebel Comics home.

“I’m going to have to take books out of my own personal collection to refill this wall,” Petitclerc said. “It’s a huge setback. That’s $10,000 of merchandise that we have to replace or somehow get back. It’s tons of time and money that we’ve spent collecting this stuff.”

He added it is especially heartbreaking because a number of the stolen key-issue comics were on consignment and those customers will need to be reimbursed.

The break and enter were especially frustrating, Petitclerc added, because of the difficult experience Rebel Comics have faced navigating the COVID-19 pandemic.

He is amazed at the support Rebel Comics has received from the community since the break-in.

Petitclerc hopes the community will be able to find the thieves and the stolen items so they can be returned to their rightful place in Rebel Comics.

“The community is being awesome already,” Petitclerc said.

Cochrane RCMP Cpl. Matthew Quallie said there have been three different break and enters in February all through the front windows of businesses— Rebel Comics, Guy's Café and Bakery and Bowridge Wine and Spirits.

He said as of now there have been no definitive positive links established between the break and enter investigations, but there are similarities.

Surveillance videos of the suspects have been provided from Rebel Comics and Guy's Café and Bakery, he said, and RCMP are hoping to make a connection between the two incidents.

The break and enter at Bowridge Wine and Spirits was interrupted by the RCMP who arrived at the site after an alarm system was triggered.

“The members were able to show up very, very quickly and they actually found the three males fleeing and carrying liquor,” Quallie said. “They were all arrested.”

Quallie noted rates are similar in Rocky View County which saw 11 break and enters this time last year, and currently sits at seven reported incidents in 2021.

“Everything is down pretty substantially,” Quallie said. He cautioned the data is only from two months of 2021 and may not indicate the expectation for the rest of the year.

Quallie contributes this change in behaviour to COVID-19 and its associated public health measures keeping people in their homes more often be it because they are working or they did not escape south for the winter months.

The RCMP compares crime statistics to known prolific offenders who have been released. They often see an uptick in certain types of crimes and programs are in place with the Crime Reductions Unit to monitor prolific offenders.

If you see something suspicious take notes, document plate numbers, create descriptions of the offenders and call the RCMP. Quallie said the RCMP encourages residents to not intervene in these situations because it is dangerous and it alerts people they have been seen.

“When we get the types of calls where people have already intervened, we rarely catch people. Whereas if they see something and they haven’t alerted them that they’ve seen them we're often able to find them,” Quallie said. “Just keep alert, you don't have to be hyper-vigilant, but if you do something suspicious, we’re very happy with those types of calls and can investigate.”

Anyone with information regarding a crime can contact Cochrane RCMP at 403-932-2211. If you wish to remain anonymous, you can contact Crime Stoppers at 1-800-222-8477 (TIPS), online at P3Tips.com or by using the "P3 Tips" app available through the Apple App or Google Play Store.