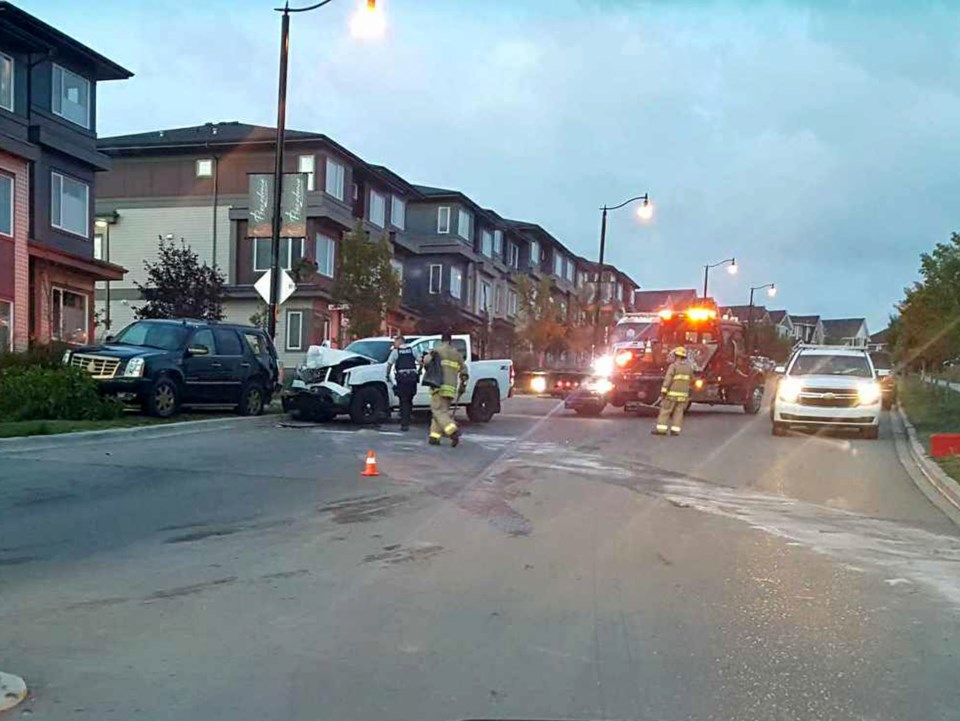 Emergency crews cleaned up the aftermath of a hit and run that occurred in the early hours of Wednesday (Aug. 12). Photo Submitted.

COCHRANE— RCMP responded to reports of a hit and run in Riversong in the early hours of Wednesday (Aug. 12).

The driver of a white truck struck a parked vehicle on River Heights Drive and fled the scene on foot, which prompted RCMP to deploy a K9 Unit.

Investigators who arrived on the scene quickly determined that the suspect had fled the scene shortly before their arrival, which is what caused them to call in a service dog and conduct the track of the driver, Savinkoff said.

“They knew he was in the area,” he noted.

Thanks to the quick actions of the RCMP members, the driver is in police custody and is currently awaiting a judicial interim release hearing.

Savinkoff noted that the individual taken into custody was known to the RCMP.

“Our checks so far have revealed that the driver of the vehicle from Calgary has had previous involvement with the police,” Savinkoff said.

Riversong resident Jerry Shannon said he came across the scene of the investigation at roughly 6 a.m. on his way to work.

The RCMP and fire department were on-scene, and Shannon was unable to pass by. While he waited, Shannon said he saw an RCMP K9 handler, along with another RCMP member accompanying the handler in the area.

Shannon said that the collision must have been fairly severe, based on the damage that he saw.

“If it was parked along the curb it definitely got reallocated, for lack of a better word. I’m assuming it got hit with some force, based on the damage, and that’s supposed to be a 30km zone,” he said.

Once the scene was cleared, Shannon said he was able to pass by and continue his commute.

Savinkoff said that the RCMP continues to investigate the cause of the collision.

“The investigation continues as far as ownership of the vehicle and what other factors may have contributed to the collision, such as impairment,” he said.