RCMP are asking for the public's assistance in its ongoing Fireside fire investigation from June 6, 2018.
Oct 17, 2020 3:00 PM By: Tyler Klinkhammer 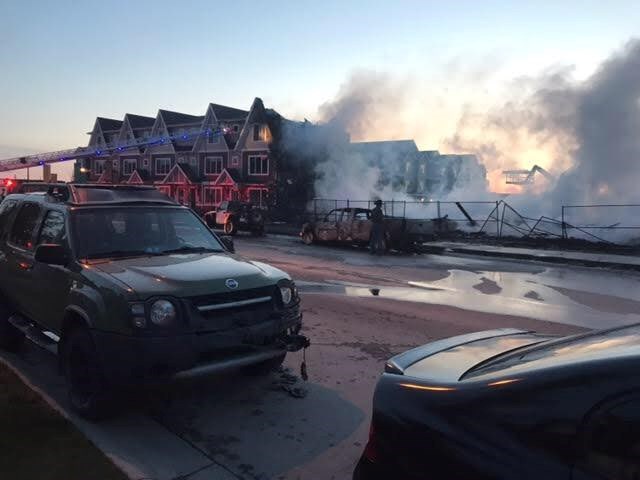 The aftermath of the fire in the Fireside neighbourhood from June 6, 2018. Photo submitted.

COCHRANE— The Cochrane RCMP continue to seek the public’s assistance with its investigation into the 2018 structure fire that tore through several under-construction townhouses in the Fireside neighbourhood.

The fire, which occurred at approximately 2:20 a.m. on June 6, 2018, was so large it damaged vehicles and homes across the street from the construction site where the blaze occurred.

Public input for cases like this is very important to the efforts made by the RMCP and can help police determine any behaviour or activity that appears out of place, said Const. Jennifer Brewer.

“It’s huge. We can go up and look for whatever it is that we may consider evidence, but the people that live there know what’s supposed to be there. They know the people that live in the area, they know what vehicles are supposed to be around,” she said. “It’s really huge for us to have the community involvement because they know exactly what belongs and what doesn’t.”

The RCMP continues to investigate, although they have not made the determination as to whether or not the fires were intentionally started or an accident.

“We still haven’t been able to determine that, that’s another reason that we need the community’s help,” Brewer said. “It’s suspicious in the fact that we can’t figure out how it started either. There’s a lot that goes into making fires suspicious, and fires are always difficult to investigate because everything gets destroyed, but again, that’s where the community gets involved.”

If you have any information about this investigation, the RCMP is asking residents to contact the Cochrane RCMP at 403-851-8000 or your local police. If you wish to remain anonymous, you can contact Crime Stoppers at 1-800-222-8477 (TIPS) or submit a tip online at P3Tips.com/.