“Native people are a big part of western society, so it’s nice to be here and share my knowledge, ideas and culture with people at the Stampede,” Auger said.
Jul 16, 2021 3:00 PM By: Chelsea Kemp 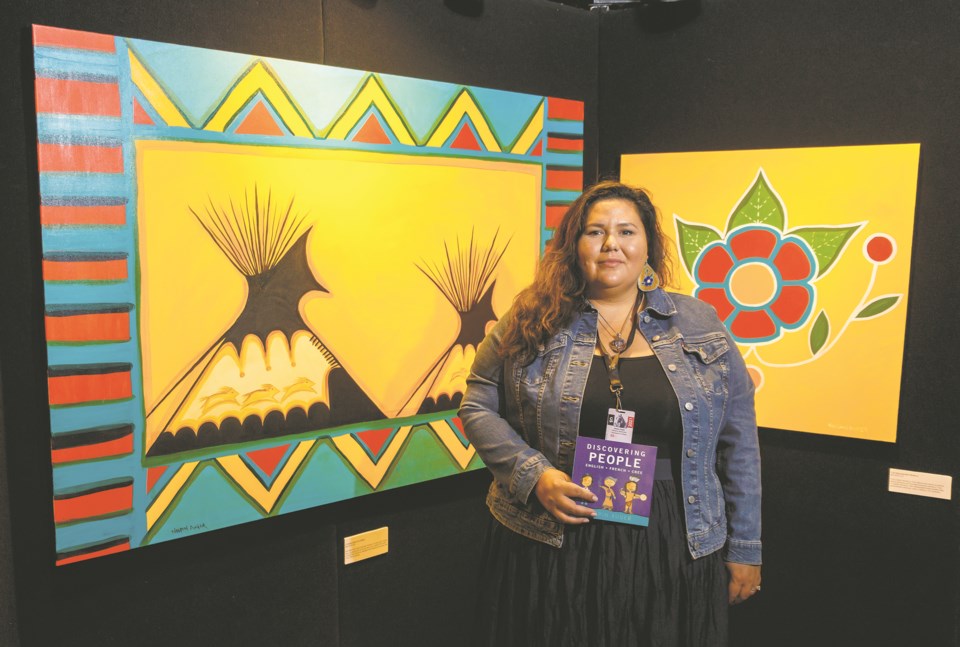 REDWOOD MEADOWS— Celebrating her culture through vibrant and energetic art, Redwood Meadows resident Neepin Auger was honoured to be featured in the Calgary Stampede 2021 Western Showcase.

Auger was initially accepted into the Calgary Stampede Western Showcase in 2020. It was disappointing to see the event cancelled due to COVID-19, she said, but it is exciting showcasing her work in the BMO Centre this year.

She has taken pride in sharing Indigenous cultural perspectives on western art during the show.

“Native people are a big part of western society, so it’s nice to be here and share my knowledge, ideas and culture with people at the Stampede,” Auger said.

To appear at the Western Showcase artists apply and their work is reviewed by a committee of jurors. Auger, 33, is one of 36 artists to appear in the 2021 show and is its youngest exhibitioner. She is one of nine new artists featured in this year's Showcase.

The Western Showcase has been an exhilarating experience because she has been able to connect with a new audience— Many who visit her show comment on the vibrancy and energy they can feel coming off her paintings.

Each painting is an expression of Auger and her connection to Cree culture. Her creations are unique, coming from her mind and heart. The paintings capture her passion and the emotional experiences of sharing her culture.

“I sit down and I just really think about what I’m feeling that day,” Auger said. “Everything I have is very unique and has a different story.”

Every one of her paintings comes with a story inspired by her experiences and culture. Auger described the process of creating as a meditative experience as she works to complete a painting.

Each stroke of her paintbrush serves to capture her feelings and energy to share with the world— However, it took time for Auger to feel confident in sharing her private thoughts with the world.

“It’s very private for me. It’s very meditative,” Auger said. “The older I got the more confident I got in sharing my work and sharing what I do— It’s got me to share what I got.”

The common theme of her paintings is celebrating people's connection to the Earth and sharing stories from her culture.

Auger has enjoyed having the opportunity to share this knowledge with new people at the Stampede. She said passing on her cultural knowledge and traditions and learning from those who visit her display has been a powerful experience.

The Western Showcase has been a special adventure because it is the largest show she has ever participated in, and marks her first gallery display since October 2019.

Auger has always had a passion for art, a love fostered by her father Dale Auger— An artist featured at the Stampede her entire life.

Dale was a renowned Indigenous artist and made his living sharing his passion with the world. He was a staple of the Western Showcase and is even featured in its Hall of Fame.

Auger grew up watching her dad paint and enjoyed learning from him. The duo would set up shop in his studio located in their three-car garage in Redwood Meadows.

“Literally the heart of our home was his studio. Anytime you were feeling anything you would go there and chill. He always had a fire going and soft music. It was a very emotional place.” Auger said. “It impacted all of us that energy of creating and being open to creating.”

Auger would sit and watch her dad paint, and his experience, passion and knowledge seemed to seep into her through osmosis.

She is honoured to be following in his legacy with an appearance at the Stampede.

“He died so young, so I like learning about what he’s done. This was a big part of his life that changes our [family’s] life,” Auger said.

it has been exciting being in the same hall he showed in, she said, adding she has had the opportunity to connect with other exhibitioners who showed alongside her dad.

“I’ve had almost everybody come up to me and say how they know my dad and when he was here, he was so vibrant,” Auger said. “It’s been really special to have that connection to him and to the other artists.”

Auger hopes to build on the momentum of the Stampede and further build her career as an artist.

Outside of her art, Auger has served as a dedicated teacher. She has spent the past 15 years focussing on her education and managed to meld her passions serving as an art teacher.

Working with youth has further fuelled her career because her students and their enthusiasm have inspired her to share her art with the world.

She created the books for young children with the goal of sharing the language and Indigenous images like teepees, sweats and moccasins.

Her aim is to get them learning Cree young and so they can eventually take on more challenging reads.

“My dad was a fluent Cree speaker my whole life, but we didn’t learn Cree fully,” Auger said. “When I had a daughter I thought, ‘How can I help and how can I change what I didn’t have.'”