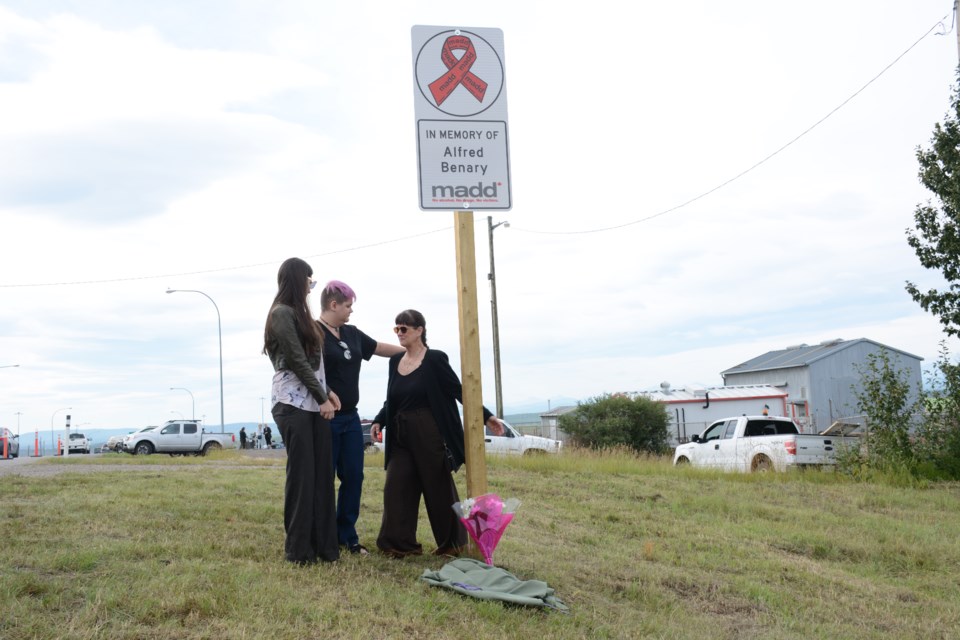 The unveiling of Alberta's first roadside memorial sign for a victim of impaired driving held along Highway 22 just north of Highway 1 was a sorrowful affair this morning (Aug. 23).

On Sept. 12, 2015, Alfred Benary's vehicle was hit by a Ford F-150 pickup truck. Benary would suffer several internal injuries and later die on Oct 2, 2015. At just 55 years old, he would never get to kiss his wife again, hug his daughters or help his brother on the farm in Water Valley.

Impaired driving is the top cause of death and injury in Canada with an average of four people killed each day. In Alberta, around 6,800 people are convicted of impaired driving each year.

"One impaired driving-related fatality in this province is too many," said Jason Graw, an inspector with the Alberta Sheriffs Branch. "The Sheriff highway patrol in partnership with the RCMP, our priorities are intercepting impaired drivers."

The mood during the unveiling of the memorial sign was a sombre one.

"It's been difficult and it never goes away, you know, for the first so many months, I thought it was just having a bad dream and I was going to wake up and turn over and he'd be there and he's not," said Adele Dirks, who was married to Benary for 16 years.

While Adele feels as though she has been left to try and piece together a never finished puzzle, it will be a learning curve.

"He's with me so he'll give his guidance in his own way," she said.

Adele and her two daughters have become strong advocates against drinking and driving. If they see something they are not hesitant to call 9-1-1.

"It's never the drunks that get hurt," said Adele, "It's only the innocent people that are dying."

Deanna Dirks, Benary's oldest daughter, is hopeful the sign will have an impact on drivers but working in the liquor industry, she sees people getting behind the wheel while intoxicated every day and unfortunately does not have high expectations.

Deanna goes on to say that even though there are courses in high schools and public service announcements on the radio to shed light on the effects of drinking and driving, it doesn't do much.

"Nobody really internalizes it until it happens to you," said Deanna.

Ric McIver, Alberta minister of transportation and Deputy House Leader, was at the memorial and hopes the sign will serve as a strong warning for individuals not to drink and drive.

"Today's a very stark and terrible reminder of what the results can be," said McIver.

He added there are plenty of other ways to get home after a night out, it's all about making the appropriate choices. However, based on statistics, McIver fears more signs of this nature will be up around Alberta.

With no concrete solutions to impaired driving, the only remaining course of action is to continue to spread awareness about the everlasting consequences, according to Mothers Against Drunk Driving (MADD), which has been a strong partner with the Alberta Government and Alberta transportation.

“Roadside signs and other memorials are a powerful way to recognize victims, and to remind the public about the tragic consequences of impaired driving,” said MADD Canada chief executive officer Andrew Murie. “One person’s choice to drive impaired took Alfred Benary’s life and devastated his whole family. When people see this memorial sign, we want it to motivate them to make a commitment to never drive impaired.”

MADD Canada has collaborated with governments in other provinces, including Manitoba, Saskatchewan, Ontario, New Brunswick, Nova Scotia and Prince Edward Island, to install memorial signs for victims of impaired driving.