A local skatepark enthusiast is hoping to see an expansion in the new year. The current 14,000-square-foot concrete plaza, including a skate bowl, is one of Southern Alberta’s most popular parks of its kind.
Jan 3, 2019 1:00 AM By: Amy Tucker 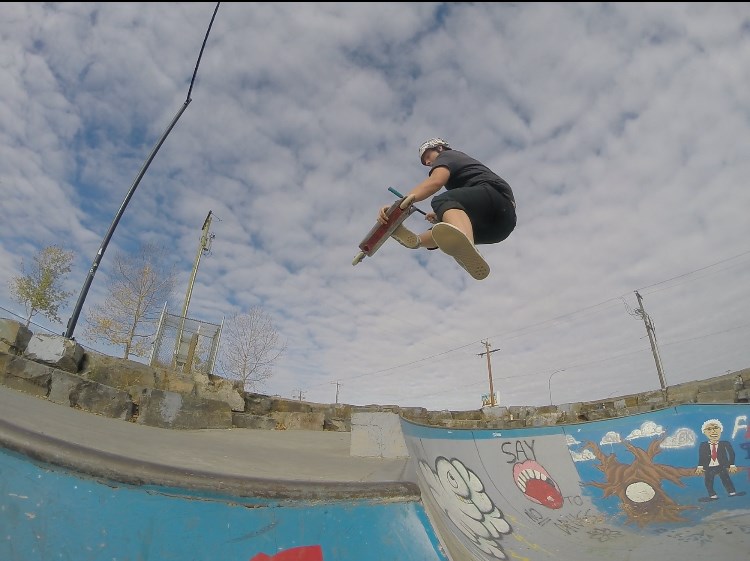 Deven Rasberry, a pro scooter rider in Cochrane, is hoping to see some changes to the town&#8217;s skatepark.

A local skatepark enthusiast is hoping to see an expansion in the new year.

The current 14,000-square-foot concrete plaza, including a skate bowl, is one of Southern Alberta’s most popular parks of its kind. However, avid user Deven Rasberry, said it’s beginning to get overcrowded.

“I think our skatepark is amazing and us locals try to keep it as well kept as possible, although for the amount of kids, teens, summer camps and amateur riders coming (and) going, the park is getting quite small for the crowds it receives in the summer or competitions like the ones hosted by Vermin Scooters June 2018. In other words, the park needs an extension,” Rasberry said.

“I use the park almost every day from spring to as far as December if weather permits because I use scootering as a career choice and a hobby, I’m often told it’s too small for how busy it gets or how it’s missing some color but that’s it’s an amazing part of the community of Cochrane and really brings young adults such as myself together.”

Rasberry added the park sets a standard in town for youth – the older kids and young adults form bonds with the community’s youngsters.

In terms of design, Rasberry said he’d like to see a space that would allow more obstacles, ramps and transitions such as box rails that are lower to the ground, new quarter pipes and an “A-frame”.

“The current skatepark had by far one of the best bowls or pools in the province. We have people from all over the place come to ride our bowl – from pro bikers like Darcy Peters to pro scooter riders like Dylan Morrison (from Australia),” Rasberry said.

“The skatepark in our little town attracts many people and celebrities in the action s ports community ... it would be respectable and responsible for the Town of Cochrane to understand that and to make the expansion and adjustments needed for it to continue flourishing in the future of young riders.”

Laurie Drukier, a town spokesperson, said there are currently no plans identified in the three-year budget capital for expansion or other construction at the skatepark. There is ongoing maintenance of the park, covered in the town’s operating budget.