“With this support, we can begin to find a way forward, so that our community has an opportunity to find hope and healing,” Young said. “It is a sad truth that the individual and communal harm that occurred in these schools affects Indigenous families and communities today through direct and intergenerational trauma.”
Jul 12, 2021 3:00 PM By: Chelsea Kemp 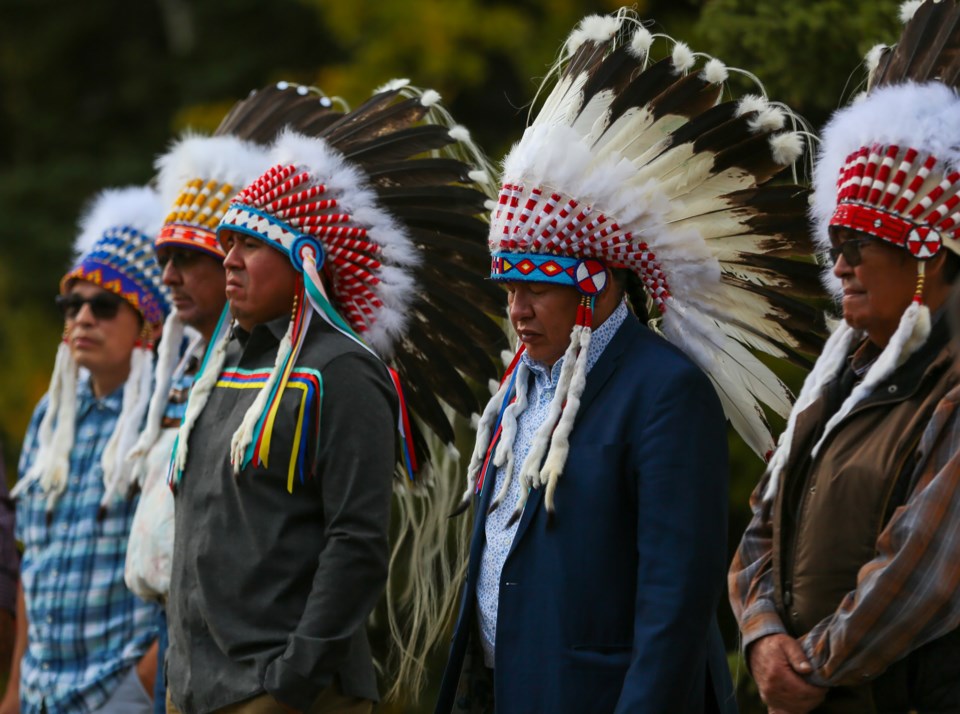 STONEY NAKODA— The Alberta government has pledged to provide $8 million in funding to support community-led research across the province to research undocumented deaths and burials at former Residential Schools.

The Alberta Residential Schools Community Research Grant is open to Indigenous communities and groups to research and gather oral histories and knowledge from elders, engage with communities to determine how to proceed with a burial site, the use of the ground-penetrating radar, other technologies and experts to explore potential unmarked grave sites and the establishment of maintenance and commemorative works to mark the locations.

In a statement to The Cochrane Eagle Chiniki First Nation Chief Aaron Young described the $8 million in funding provided by the provincial government as a tangible step toward Reconciliation.

“With this support, we can begin to find a way forward, so that our community has an opportunity to find hope and healing,” Young said. “It is a sad truth that the individual and communal harm that occurred in these schools affects Indigenous families and communities today through direct and intergenerational trauma.”

Residential Schools left individual and communal harms in families and communities through direct and intergenerational trauma. The unfortunate legacy of the schools transcends time, he said, and impacts the current generations of Indigenous children and communities.

Young added these devastating results have in part led to the current opioid crisis in the community.

“It is only by working together with all levels of government and other First Nations, that we can address this serious and deadly side effect of trauma. Perhaps now, with this acknowledgement of truth, we will be able to help one another rest more easily with our heritage and culture. Perhaps now, we will be able to find some peace and closure,” Young said. “Beginning with a Ceremony for guidance, the Bearspaw, Chiniki and Wesley First Nations will work together in consultation with our Elders and community members to determine the best way forward. We are deeply grateful to the province for the hope and support they have given us at this time of grief and loss.”

The Alberta Residential Schools Community Research Grant is available to communities and organizations that submit a research proposal for a single Residential School site. Individual applications are eligible for up to $150,000 in funding and can be submitted until Jan. 15, 2022.

“All Albertans stand with Indigenous communities across the country who live with the legacy of Canada’s Residential School program. The devastating discovery of 215 human remains in Kamloops has been a call to action,” said Premier Jason Kenney. “A great deal of work has been done by First Nations and others to help identify remains and undocumented burial sites, but there is much more work that still needs to be done. Alberta’s government is committed to assisting Indigenous communities to identify and commemorate these sites, in the spirit of Reconciliation.”

Dr. Cora Voyageur, member of the Athabasca Chipewyan First Nation, Residential School survivor, and Indigenous sociology professor at the University of Calgary said the funding for unmarked graves is a “step in the right direction.”

The search for unmarked graves in these areas marks a big task not only in Alberta, but across the country. Voyageur said there are believed to be between 139 to 146 unmarked graves sites in Canada.

An estimated 150,000 First Nations, Inuit and Métis children attended residential schools from the 1860s to 1996. The Truth and Reconciliation Commission documented stories from survivors and families and issued a report in 2015.

The report detailed mistreatment at the schools, including emotional, physical and sexual abuse of children, and at least 4,100 deaths.

Voyageur’s own family has five generations that have been impacted by Residential Schools, after attending The Holy Angels Indian Residential School in Fort Chipewyan. The school was in place for 100 years under the control of the Roman Catholic Church from 1874-1974.

Discussing the unmarked graves and legacy of Residential School is challenging, she said, because these stories have not been widely known in Canada, even though the schools were in place for more than 100 years in the country.

Many people knew about the schools in their areas because they would interact with the students who often helped on farms, but for those who lived outside these areas little was known about Residential Schools.

The access to information regarding Residential Schools has been transformed by social media and this is transforming conversations in Canada.

“This has been going on for 100 years in the Indigenous community. I’m glad that there has been an uproar in mainstream society and there has been support from people,” Voyageur said. “At the same time the TRC [Truth and Reconciliation] reports have been out for six years and there is an entire volume, volume four, talks about missing children and unmarked burials. This isn’t new and it's not anything that is new to the Indigenous community.”

Volume Four of the Truth and Reconciliation Report detailed four steps that could help identify how many children died in Residential Schools and where they were buried.

These steps include— A statistical survey to create an estimate of student enrolment, including rates of death and disease at the schools; A study to review the administrative policies at the school relating to death, illness and missing students; A study to identify the location of cemeteries and grave sites of potential burials; A project to help locate information regarding former students who may have died or gone missing while in the care of residential schools, including locating burial sites.

Crown-Indigenous Relations Minister Carolyn Bennett announced in June the federal government is ready to distribute $27 million in funding to assist Indigenous communities in locating and memorializing children who died at residential schools.

Voyageur said as these discoveries continue to be unearthed an emphasis needs to be placed on supporting the mental health of Residential School survivors who may be re-traumatized.

“It would be good to have support for those community members who may be coming to grips with the fact that the family member who has been missing since going to Residential School has finally been found,” Voyageur said.