Jenna Dulewich & Tanya Foubert Two Stoney Nakoda men originally charged with first-degree murder in the 2017 killing of Lorenzo “Billy” Bearspaw have been sentenced to nine years in prison each after they pleaded guilty to manslaughte
Jun 12, 2019 8:39 AM By: Tanya Foubert 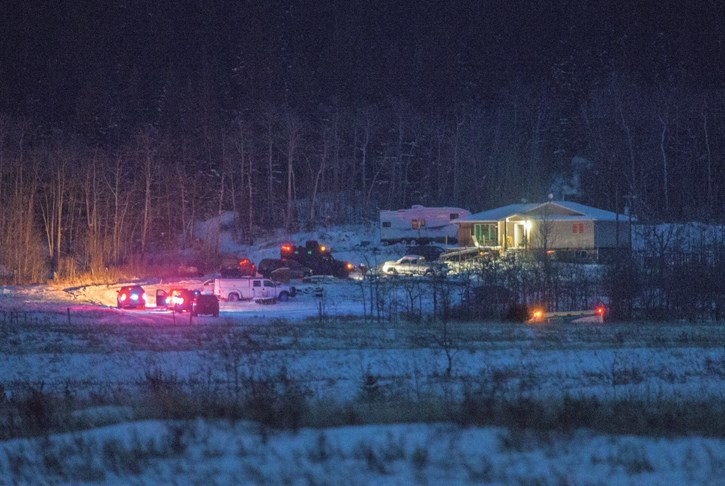 Aryn Toombs/Rocky Mountain Outlook STONEY NAKODA, AB -- January 7, 2017 -- RCMP along with EMS surround a house on the Stoney Nakoda First Nation on Saturday (Jan. 7) where members of the RCMP served warrants for first degree murder of Lorenzo Bearspaw, a.k.a Billy Bearspaw. John Stephens, Ralph Stephens and Diangelo Powderface were the suspects sought in the arrest warrant. John Stephens was arrested by RCMP emergency tactical response team members, but during this arrest Ralph Stephens was shot and later succumbed to injuries from that shooting. Diangelo Powderface remains at large and is being sought by RCMP. ASIRT is now investigating the shooting. (Aryn Toombs/Rocky Mountain Outlook) (For News story by Jordan Small) SLUG: Stoney Nakoda Shooting ISSUE 2

Two Stoney Nakoda men originally charged with first-degree murder in the 2017 killing of Lorenzo “Billy” Bearspaw have been sentenced to nine years in prison each after they pleaded guilty to manslaughter on Tuesday (June 10).

Crown prosecutor Doug Simpson said John Stephens, 31, and Deangelo Powderface, 24, entered the pleas to a lower offence of manslaughter, which was accepted by the courts.

Ralph Stephens, 27, was also charged with the killing, but was fatally shot by an Emergency Response Team officer when RCMP were in the process of serving warrants against the three men the day after Bearspaw's body was discovered.

In an agreed statement of the facts, Stephens and Powderface said they were highly intoxicated with alcohol and drugs at the time of the attack and have very little recollection, Simpson explained.

Simpson and defence lawyers Balfour Der and Eleanor Funk presented the agreed statement of the facts to Justice Glen Poelman in a Calgary courtroom this week.

"There was blunt force trauma and multiple stab wounds, either could have contributed to his death, according to the medical examiner, [they] are not specific on which one was the cause but both could have caused the death," Simpson said.

According to his obituary, Bearpaw was survived by several brothers and sisters and also left behind two sons. A tree was planted in Fish Creek Provincial Park, as a living memorial by the McInnis and Holloway Funeral Homes from Cochrane.

Bearspaw was last seen on Jan. 1, 2017 getting into a vehicle with other males following a New Year's Eve party. Two days later, the 27-year-old was reported missing and Special Tactical Operations and Police Dog Services discovered Bearspaw's body three days later on Jan. 6, 2017. The vehicle Bearspaw was last seen in was also later located abandoned in a ditch.

Following the discovery of the body, warrants were issued for three Stoney Nakoda men, the Stephens brothers and Powderface, and RCMP, Major Crimes and the RCMP Emergency Response Team (ERT) went to a residence in Morley to execute the warrants.

On Jan. 7, 2017, the victim’s father met the officers at the doorway, and John Stephens was located on the first floor and arrested without incident.

When officers attempted to enter the basement, they were fired upon.

"A number of officers went down to clear the basement, announcing that they were police and that they had a warrant,” stated the Alberta Serious Incident Response Team (ASIRT) report into the incident, released last week.

“As they moved along an interior wall towards a doorway in the basement, a man, later confirmed to have been the 27-year-old [Stephens], yelled at the officers to get out and leave him alone.

“A single shot was then fired from the opposite side of the wall, penetrating through drywall and narrowly missing the officers. The officers called out ‘shots fired,’ returned to the main floor and, after throwing a tear gas canister into the basement, evacuated the residence.”

An officer took up a position on the west side of the residence in the treeline, approximately 12 metres away from the house. Another gunshot was heard, according to investigators, and a woman climbed out of one of the basement windows.

“As the officer yelled commands for her to walk towards him, the 27-year-old man emerged from the same basement window with a shotgun in his hands, carried at waist level and pointing in the direction of the officer and the young woman,” stated the report. “The officer fired a single shot from his rifle, striking the 27-year-old man in the torso, causing him to collapse to the ground.”

The man was taken in a police vehicle to a nearby ambulance and transported to hospital in Calgary, but he had suffered significant injuries and died. The gunshot wound to his abdomen caused injury to his internal organs and spinal cord. The 12-gauge tactical shotgun he was carrying was recovered loaded with three unfired shells and the pump action in the firing position, according to investigators.

Powderface turned himself in later that evening.

“These events are tragic for the families, first responders and the Morley Community,” said Chief Superintendent Tony Hamori, officer in charge of Southern Alberta District RCMP, immediately after the incident. “On behalf of the RCMP, I want to extend sincere condolences to the families of Lorenzo Bearspaw and Ralph Stephens. I also urge calm in the community while the investigations take place.”

Following a two-year investigation by ASIRT, the RCMP Emergency Response Team officer was cleared of criminal wrongdoing in the shooting death of Ralph Stephens earlier this week.

The team independently investigates incidents involving Alberta police that result in serious injury or death, interviewed police and civilian witnesses to the shooting, as well as photographs, radio communications and all available video.

On June 6, executive director Susan Hughson said there were no reasonable grounds, nor reasonable suspicion, to believe the officer committed a criminal offence.

“The officer was lawfully placed and acting in the lawful execution of his duty. In the circumstances, the force used was both reasonable and authorized under the Criminal Code,” stated the press release. “There being no grounds to believe that an offence was committed by a police officer, no charges will be laid.”

Stephens and Powderface have credited for the prison time already served and have approximately 65 to 66 months left in their sentences.