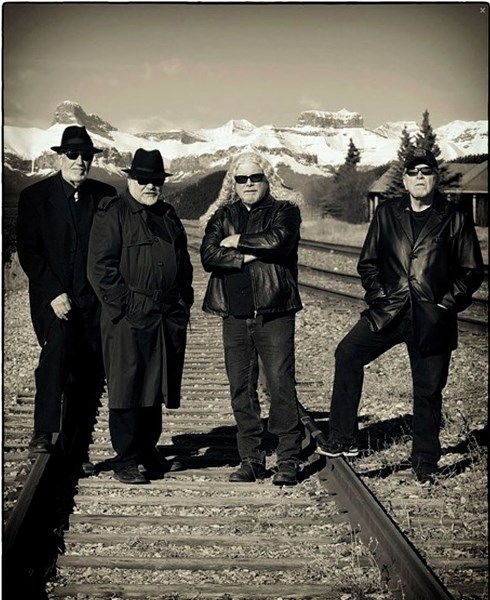 Blues band Smoking Aces will be hitting the Legacy Guitar House stage on May 14.

The up-and-coming Chicago blues band is made up of John White as songwriter and on bass guitar, Brian Burrows on drums, Barry Valgardson on keyboards, and Dave Macrae on guitar and harp.

“We’re writing about 50 per cent of what we play now, so to some extent our genre has changed a little bit. Basically it’s still kind of 12-bar Chicago blues but we try and get a little variety in there,” said White.

The band has recently been heard internationally thanks to their latest album Between the Tracks.

“We’ve done very well with that album to be honest. Bearing in mind, we’re just a local blues band and out in Kamloops we’ve been up in the charts along with Tim Williams, who was at Legacy last week. We’ve been on the blues charts now for six or eight weeks,” White said.

The experience was different than what Smoking Aces is used to – for one of the tracks, Lewis “talked over the top” of the music said White.

“It was kind of an interesting situation for us because Herschell himself did the vocals – so he came with the words and asked ‘Can you put some music together to make this work, I want it kind of blues-y?’ And Dave our guitar player came up with the rest,” White said.

The band also recorded an instrumental track for the movie as well as another song with the band members reciting a poem over top of the music. White said that while the band writes and performs dark-themed music, the songs recorded for the movie were a level above.

“Some of the stuff we write is pretty dark, but I think one of the lines from those tracks is, ‘It’s a gory story.’ So, yeah, I don’t tend to write those kind of lyrics,” White said with a laugh.

Fans of Smoking Aces are in for a treat at the May 14 performance because the band will be playing some never-before-heard tracks.

“We literally just started working on the 10 tracks that we’ve written ourselves for the next album. We’re going to write two or three of those into the set this time just to get a little bit of a feel from the audience whether they like them,” White said.

White said they would be recording the new album at a studio outside of Bragg Creek and hope to be able to release it in September 2016.

Celebrating their fifth anniversary this June, The Smoking Aces are pleased with the progress they’ve made over the years and are thrilled to perform at the Legacy Guitar House as it shows popularity keeps increasing.

“The disappointment for us is that we can’t play Legacy more often, it’s now such a popular venue – not just for local musicians but for musicians across Canada. We like the atmosphere, the team there does a great job to make bands feel welcome,” White said.

“It seems to me that there’s kind of a new scene developing, which is ‘coffee shop’ … It’s nice because you can tell the stories behind the songs and you can get some feedback from the audience … It’s much more personal.”

The show will start at 8:00 p.m, tickets can be purchased here http://smokingaces.zoobis.com.