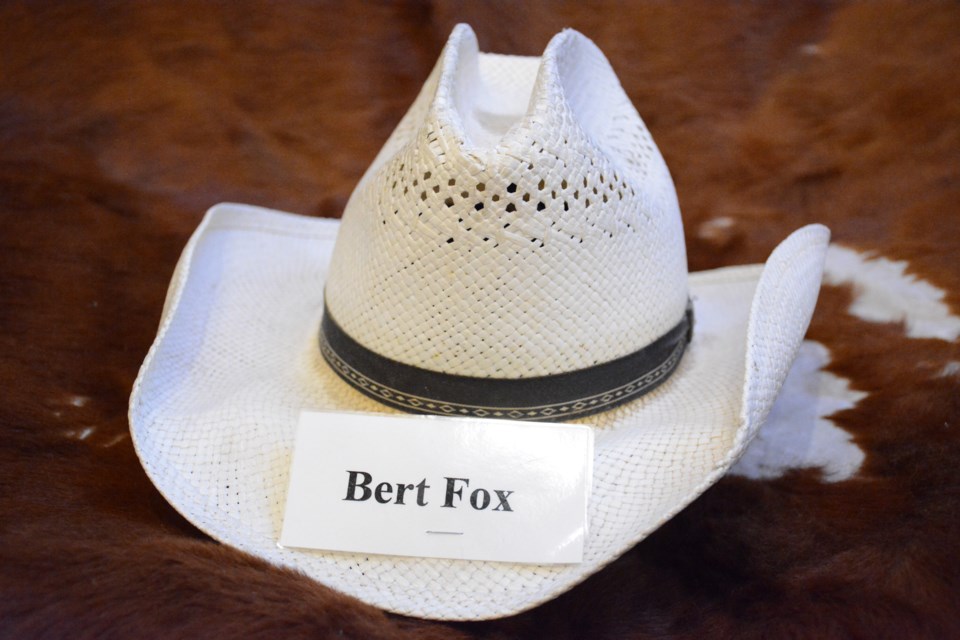 We meet again, Thursday. Is it just me, or does anyone else feel like time is surprisingly flying by? We are almost through another week, and with that comes another Thursday Tack and Tale from Stockmen's Memorial Foundation ready to go.

This week some background on the clever, trusted farmer, Herbert Fox.

The day was July 29, 1919 and Herbert Charles Fox (Bert) would be born in Nanton, Alberta. Growing up in the serene beauty of the Porcupine Hills on his parents farm, Bert would foster a love for all things farming and nature related. In 1941 at 22 years young, Bert's attachment to the farm soon hit the pause button as he would spend nearly four years in the Canadian Army.

Bert served with the Seventh Field Company, Second Division Engineers and would eventually be stationed near Caen in France which was part of the second wave after the famous Normandy invasion.

After returning from his duty overseas, Bert now carried the Veteran title and was able to borrow money to continue on with his dreams of ranching. He purchased the half-section located nine miles up Grand Valley for 20 dollars an acre. That was the start of a long-lasting affair on the farming front, and over the years Bert would slowly add more to his equipment collection which started out as only an axe, saw and saddle. Over the years Bert would work for neighbours in the surrounding area to aid himself in obtaining more farming machinery.

Bert was known as a distinguished farmer who made do with what he had. His equipment was some of the oldest around, but he managed to find ways to work around it. This was admired by many and envied by others because his overhead was much lower than his fellow counterparts. Bert knew his land and cattle so well that it evidently made him successful in his trade. Often times he would have to turn to hard manual labour instead of machinery and this proved to show his capability and triumph.

As dances were a hit back in the day, it wouldn't come as a surprise that Bert would meet his future bride, Anna Gertrude Swalling (Gert) at the Alhazar Temple dance in Calgary. The two quickly hit it off and had such trust in one another, Gert wasn't even worried on the day of their wedding when Bert was near an hour late. This could be better credited to the unexpected snowstorm that hit March 21, 1951 preventing Bert from using his truck to get to the church on time.

The pair became famously classified as "Bert and Gert" and would raise two boys together, John and George. In late 1969, Bert and Gert would face the biggest devastation as their son John would die in a choring accident on the farm. The heartache would be felt for a quite some time before they were able to resume their involvement in the local community.

Their other son George went on to become a widely known country singer. The youngster grew up during the 70's and 80's, indulging in country dance and would learn his craft from some great community functions. It is said George used his savings and sold some of his cattle in order to get his first recording out there. His musical talent proved to be liked by many folk as George would win numerous awards including Canadian Country Music Awards 'Male Vocalist of the Year'  and the Juno Awards 'Country Male Vocalist Of The Year.'

In 1995, Cochrane recognized the Fox family for their contributions with a street-naming ceremony. The road leading west from Highway 22 on the south side of the Bow River became known as George Fox Trail.

Gert was first to say goodbye as she passed away after battling cancer in 1996. Bert passed in 2007 at the age of 88. An excerpt from the song A Kind Word written by son George acknowledging his parents goes as follows,

"You've done quite a stroke of business

I can't thank you quite enough.

You took the lead and found a reason

When the going was mighty tough.

This family and this nation, independent free and strong

Owe thanks to the likes of you, now we've got somewhere we belong.

So, I'll proudly sing the story of your pioneering glory."