University Student looks to inspire conversation about racism in Cochrane

“I hope that it plants a seed and that they go home and have a conversation about race,” Gicuhi said. “They can self-reflect and look at, ‘What am I doing, what biases do I have that I need to correct.’”
Jun 30, 2020 3:00 PM By: Chelsea Kemp 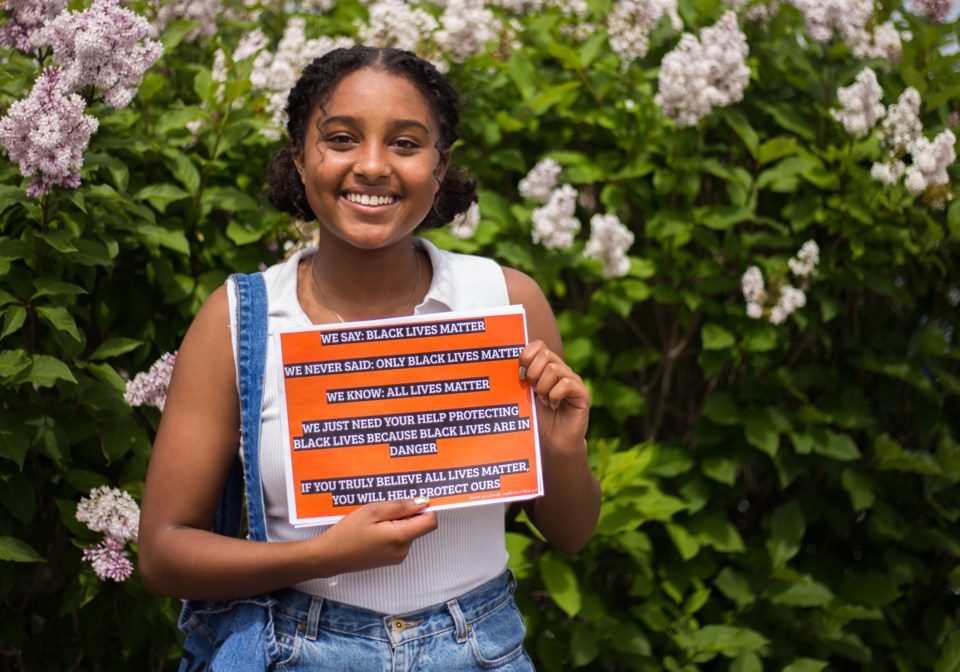 COCHRANE— A Cochrane university student is using her time home from school to help shine a light on the need for anti-racism action.

Black Live Matter advocate Natasha Gicuhi, 18,  has launched a project that aims to start a conversation about the movement by placing informative posters around Cochrane.

“It was something small that I thought I could start out with,” Gicuhi said. “It’s to raise awareness and get the conversation going about racism in Canada and Cochrane.”

Gicuhi is back in Cochrane after her classes at Carleton University moved online due to COVID-19.

She said the Black Lives Matter movement is the process of seeking equality and highlighting the disadvantages minorities face when trying to work towards equity in society.

“We know that all lives matter, we’re just saying that there’s some that are targeted and there are some that are disadvantaged in our society,” Gicuhi said. “Until we acknowledge that there won’t be change.”

Gicuhi said she has experienced racism first-hand growing up in Cochrane.

Some experiences are more subtle she said such as walking into a room and being the only person of colour or people asking for an “N-word pass”, while others are more aggressive.

“The first time I was called the N-word I was 13 just walking down main street by myself,” Gicuhi said. “A lot of people don’t get how awful it feels to say that word to someone."

It is getting better in Cochrane as the population becomes more diverse, she said, but some people continue to ignore racism in the community which helps it to thrive.

“We’re moving forward as a society and if we don’t talk about it then we won’t change,” Gicuhi said. “Talking about it is the first step towards equality and approaching even larger issues like systemic racism.”

Each poster will help people reflect on and understand the Black Live Matter movement and how they can actively be anti-racist, she said. Gicuhi added that her posters are the first step on a journey of encouraging people to actively push for change in society.

Talking about racism can be an uncomfortable conversation she said, but it is an important dialogue to have because it can lead to growth and societal change.

“They're uncomfortable [conversations] and they should be because it’s not a comfortable topic."

Gicuhi said she based the posters on what she has learned online and through conversations. Each poster is designed to be a quick hit of information that has been tailor-made to help encourage dialogue about racism in Cochrane.

The posters cover different types of racism, explaining the importance of being an anti-racism advocate and talking about the Black Lives Matter movement.

Other posters talk about the history of racism in Canada touching on events and places people may not know about including Africville in Novia Scotia, Residential Schools, Starlight tours in Saskatchewan, the Chinese head tax in early Canada and other significant moments in the country’s formation that have led to ingrained racism.

When people see one of her posters Gicuhi said she hopes they stop to read it and take in the information.

“I hope that it plants a seed and that they go home and have a conversation about race,” Gicuhi said. “They can self-reflect and look at, ‘What am I doing, what biases do I have that I need to correct.’”

Gicuhi also uses the posters to breakdown how to be an ally to the Black Lives Matter movement.

She said there are three key actions to take— Listening to the experience of those that have experienced racism, learning how to engage with the topic and acknowledge your biases through self-educating and standing-up and being actively anti-racist.

“It’s challenging people to think differently and going out there and being publicly anti-racist,” Gicuhi said.

Being anti-racist is an on-going process she said, explaining that the Black Lives Matter movement has already been going on for years and will likely take many years more to achieve equality for all.

“There’s massive systems of oppression that are going to take a long time to dismantle and rebuild,” Gicuhi said.