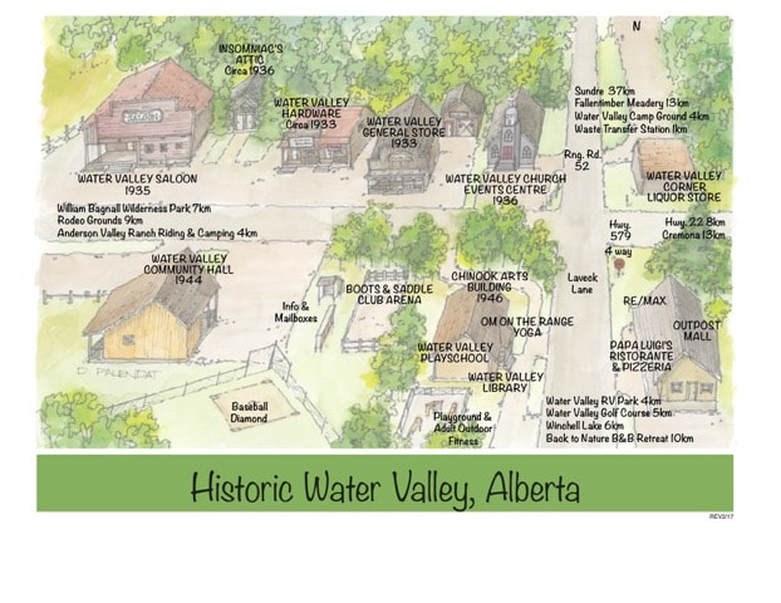 The flagship fundraiser, run entirely by volunteers, will take place at the new Water Valley Community Hall. Proceeds from the event will go toward paying off the community hall.

“The new hall is now built, it’s a beautiful facility and is used for wonderful community events and programs for all ages,” said event coordinator Robin Smith.

“It’s a beautiful new facility. It’s all about community.”

The original community hall, which sits on Water Valley's main strip next to the school, was built in 1942 and renovated three decades later in 1972.

In 2017 members of the association told the Cochrane Eagle when they looked at renovating the building again they realized there were “structural and foundation” issues. A 2015 estimate showed the cost of repairs would tally to half the price tag of a new hall.

The $1.1-million project was more than 15 years in the making and received $900,000 from a Community Facility Enhancement Program (CFEP) grant from the Alberta Government.

Doors open for the event at 4:30 p.m. Smith said the event was originally intended to auction stud horse fees. There will be a registered stud horse with stud fees available to auction, but now the event has transitioned into also auctioning merchandise, homemade items and experiences.

Attendees over the age of 18 can attend the event and have a drink at the cash bar or purchase homemade food. The silent auction, featuring around 200 items, begins when the doors open. The live auction will commence at 7 p.m. and will have about 40 items up for bid.

“That’s where things pick up, that’s really really fun,” Smith said about the live auction. Just like in previous years the community association has recruited professional auctioneers and a local radio personality to MC the event.

Items "big and small" are available for auction said Smith. Although the province is struggling through tough economic times, she said she was elated at the outpouring of support from local businesses who donated items.

Over Christmas she approached a woman selling stick ponies at a Christmas market at the Heritage Centre east of Cremona. She asked the woman if she’d consider donating a pony. The woman was selling on behalf of her Saskatchewan-based sister and called her sister and passed Smith her cell phone. Smith said the sister, having no connection to Water Valley, immediately agreed to donate a piece.

“The generosity of strangers to support a community just warms my heart,” Smith said.

The community association is still looking for donations. Donations of merchandise or gift certificates are assigned to the following categories: entertainment and experience; house and home; children and furry pals; food and drink; health, beauty and apparel; services, tools and garage; art and music and garden and ranch.

The association also collects cash donations. The association is a registered charity and will issue tax receipts for items deemed eligible by the Canada Revenue Agency. Donations can be dropped off at the Water Valley General Store during business hours before Wednesday, March 4.