“When they [Alex Baum and Dan Kroffat] recognize something in the community that needs to be done, they're the first people to step in, identify it and try and come up with a solution,” Wagman said. “They see things in our community from start to finish.”
Oct 30, 2020 3:00 PM By: Chelsea Kemp 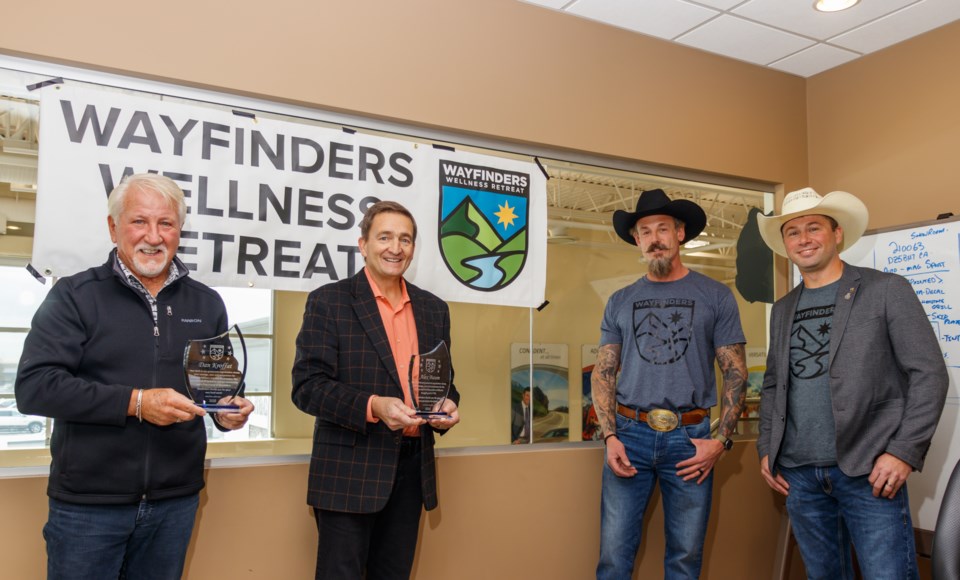 Wagman praised Baum and Kroffat for their grassroots support of the Wafinders Wellness Retreat located at the historic WineGlass Ranch. The wellness retreat will blend traditional and alternative healing methods to create a space that fits the needs of those looking to heal from post-traumatic stress.

As an organization having a “heart of gratitude” has been key, Talsma said, and they appreciate everyone who is stepping up to help create a safe space where first responders and veterans can begin to heal from the wounds left by PTSD.

“This is recognizing those early movers— We can’t do it without them,” Talsma said.

Kroffat and Baum are unique community innovators, Wagman said, who together have been able to make Cochrane great.

“When they recognize something in the community that needs to be done, they're the first people to step in, identify it and try and come up with a solution,” Wagman said. “They see things in our community from start to finish.”

He added the duo’s credibility in the community has played a critical role in helping the Wayfinders engage and grow their place in the Cochrane community.

It was a surprise for both Kroffat and Baum to receive the awards.

Baum said the day reminded him of what makes Cochrane special— The culture of looking after one's neighbours.

Wayfinders serves as an inspiration to continue the tradition of looking after one and other.

“We’re all feeling a little bit of the post-traumatic syndrome,” Baum said. “We’ve been lucky enough to live in a free country because of those that have gone before us, the front line workers, all of that. We’re just starting to feel a little bit of what they feel every day. They’re on the frontlines for the good, the bad and the ugly.”

It is critical to help create an environment where they can stay well and he hopes Wayfinders will be part of that solution in helping people heal from PTSD.

“It’s a beautiful place to be— You have people that say, ‘We’re here to help you get through this tough patch,’” Baum said. “That’s the Cochrane I know.”

“I think the work they’re doing is worthwhile and I think eventually once they’re working 100 per cent they’re going to provide to the community and to people in need,” Kroffat said. “They are truly serving the needs of people.”

Wayfinders Wellness will play an essential role for those healing from PTSD, he said, not only because they are raising awareness but because they are also finding a way to be sustainable in the community while remaining transparent.

PTSD has not always been a subject people have been willing to talk about openly, he said, and Wayfinders are helping support conversations centred on mental health.

Kroffat became personally involved with Wayfinders after sharing his personal story of PTSD. It was a hard story to share, he said, adding he went more than 25 years without uttering a word because it is an uncomfortable story to share.

“We’ve come a long way—  We’re more transparent, more open and more willing to talk about the subject matter associated with PTSD,” Kroffat said. “I think that great because  part of the healing process is to be able to talk about the things that we’re dealing with.”

Wayfinders is a “feather in the cap” for Cochrane, he said, demonstrating the community's commitment to looking after one’s neighbours even during COVID-19.

Wayfinders is continuing to build momentum, Wagman said, and are planning a series of events to commemorate the Remembrance Day season.

On Nov. 9 Wayfinders will be partnering with Spray Lake Sawmills Family Sports Centre to host an event to bring the community together, while honouring the Remembrance Day season.

Wagman will be hosting the Boot Camp Sweat For A Vet event at the recreation centre and Talsma will be leading a Remembrance Day Walk/March on the banks of the Bow River.

Both events will be live-streamed and people are encouraged to participate online or in-person.

The fundraising event is looking to raise donations for the Wayfinders Wellness music therapy room. Donations will go towards rehabbing the room during the winter months.

The event at the sports centre will have a brief opening ceremony with new Wayfinders Wellness Retreat ambassador Olympian Christina Smith.

Wagman said they are hoping to continue growing and encourage anyone interested to reach out and help.

The ultimate goal is to create high profile awareness, Wagman said, because it aids in creating conversations about positive mental health across Canada— A topic more important than ever during the COVID-19 pandemic.

“There’s an open call for the entire community to come out, get involved and realize we’re still all here together,” Talsma said. “This is an open-armed big broad net.”