Cochrane product and Okotoks Oilers forward Austin Wong has committed to the University of Harvard of the National Collegiate Athletics Association (NCAA).
0
Oct 26, 2017 12:00 AM By: Troy Durrell 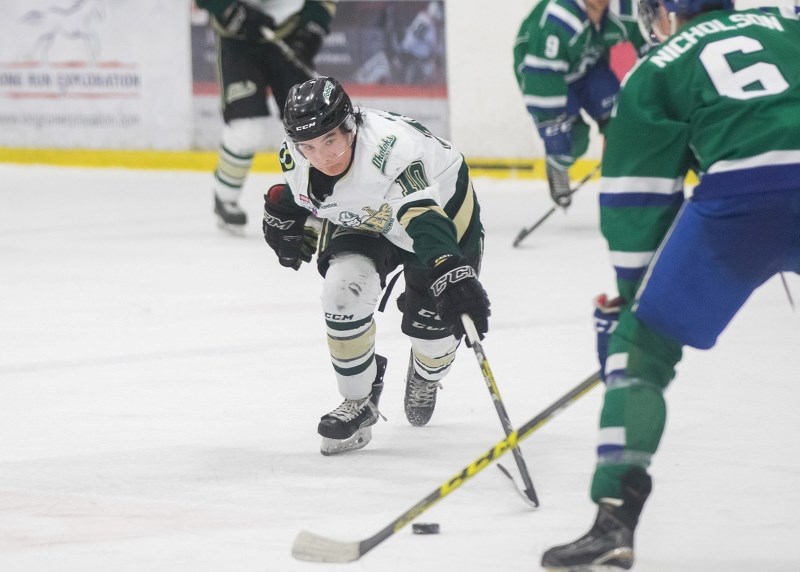 Cochrane hockey star Austin Wong, who is currently lacing them up with the AJHL&#8217;s Okotoks Oilers has comitted to the University of Harvard.

Cochrane product and Okotoks Oilers forward Austin Wong has committed to the University of Harvard of the National Collegiate Athletics Association (NCAA).

The youngest of the three Wong brothers, Tyler is currently playing in the American Hockey League with the Chicago Wolves, only a month removed from scoring the first ever goal in Vegas Golden Knights’ history during preseason action. His brother Colton is an assistant captain for the Cochrane Generals.

Wong had a chance to play for the Western Hockey League’s Lethbridge Hurricanes where his older brother Tyler starred for five seasons, but opted instead to pursue NCAA hockey.

“I’m really excited to be going to Harvard, and believe it’s a great opportunity to get an amazing education while playing high-level hockey,” Wong said.

“I believe playing in the Ivy League will be great for my hockey development, being that they are one of the top-ranked team’s in the country.”

The Cochrane native travelled to the Cambridge, Mass., campus, and was amazed with the facilities and how well the Crimson have built up their athletics program.

“I was undecided before going there but after I saw the campus and the hockey facility, as well as talking to the coaching staff, I knew this is where I wanted to be,” Wong said.

Just to be considered for an Ivy League school, Wong’s grades need to be top notch. He has marks in the 90s and scored 1,170 on his SAT … he will take the latter again to attempt to boost his score if possible. The Grade 12 student is leaning towards playing one extra season at the Junior A level before moving onto the NCAA in the 2019-20 season.

“Hockey will always come to an end, you have to have something to fall back on,” Wong said.

“Harvard offers a great education and it was something I couldn’t pass up.”

Wong has suited up for the Bow Valley Timberwolves, the Airdrie Xtreme, and the AC Avalanche before finding his way to Okotoks last season. Wong posted 20 points in 53 games in his rookie year of junior and looks poised to smash those totals this year. He already has six goals and five assists for 11 points in 12 games.