“What a great time to start back up and get more and more people involved,” Horton said. “You can be any size and there’s a position for you on the field ... Most of rugby is no cuts. There’s no tryouts. You turn up you play.”
Jul 8, 2021 3:00 PM By: Chelsea Kemp 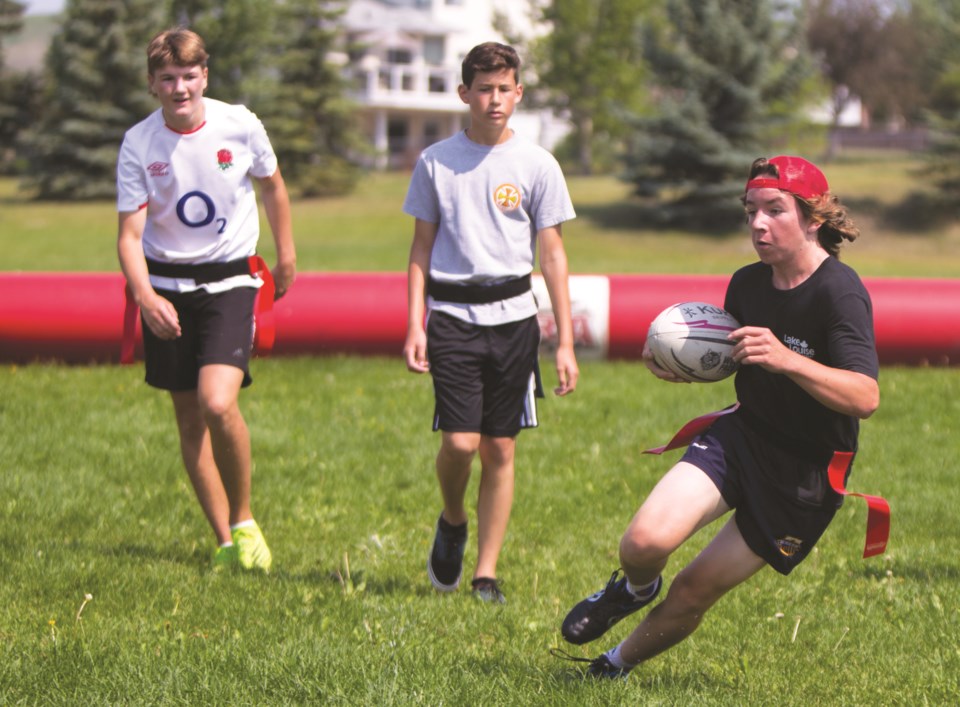 “Our goal is to try and get some people back after the whole COVID shutdown,” Buydens said.

During the Try Rugby Day several stations were available to allow athletes to test out different parts of the sport, Buydens said, but more importantly, it let athletes feel what it is like to have a rugby ball in their hands.

Buydens approached the Bow Valley Rugby Club with the idea of hosting an event with Rugby Alberta staff to showcase and support the local rugby community in Cochrane.

“My favourite thing about rugby is, it’s one of the only sports I’ve ever played that is really just community-oriented. You can go anywhere in the world and just have 20 friends instantly in the local rugby team,” he said.

Buydens began playing rugby when he was around 11-years-old and has been tearing up the field ever since.

It is fun passing on the sport to new players and Rugby Alberta remains focussed on helping grow the sport in the province, Buydens said.

Bow Valley Rugby Club manager Francine Horton said she was grateful to collaborate with Rugby Alberta for a special event in Cochrane.

It was an amazing experience watching seasoned players connect with rookies to showcase what makes the sport special.

The free event did not involve contact play but offered the opportunity to try out flag rugby with other players.

“It’s just about coming down and getting a feeling for that ball, and seeing what’s going and the sort of equipment we have and things we do,” Horton said. “We can’t invite kids to try with our club during proper practices because there’s full contact— So today, is us letting kids try it out.”

While the club was worried the sport could face a decreased number of players due to COVID-19, Horton said, membership has been holding steady.

The goal now is to share rugby with more people. With the end of most public health measures in the province, it seemed like the perfect time to kick of the season with a come-and-try event.

“What a great time to start back up and get more and more people involved,” Horton said. “You can be any size and there’s a position for you on the field ... Most of rugby is no cuts. There’s no tryouts. You turn up you play.”

Bow Valley Rugby Club is working to grow its girl's program, and the players who have signed up with the team have found a sense of empowerment on the field, Horton said. She added the U13 girls' team has found success working as a team taking home multiple trophies.

“We just want to carry on with that success,” Horton said.

She was playing for the Cochrane Kodiaks Basketball team when she connected with a friend who was a member of the Rugby Club. Amy attended winter training with the club and immediately fell in love with the sport.

“I like how it's fast-paced and how we work together as a team and we have really good chemistry,” Amy said. “This club especially the community is really good and so supportive.”

Amy is entering into U15 rugby and is excited to play the full-on game next season.

“I really enjoy it because you get to share that passion with someone,” Amy said. “It’s really rewarding because I’ve helped another person develop and become more confident in themselves and I’ve helped them find a new way to make friends and have a new outlet in the sport."

She added the try-out day was especially exciting as it is the first major event for the club since COVID-19.