Coming off a tough 4-1 loss at the hands of the Calgary Titans the Cochrane Chaos put their nose to the grindstone and were able to come away with a pair of victories.
0
Oct 31, 2019 3:18 PM By: Troy Durrell 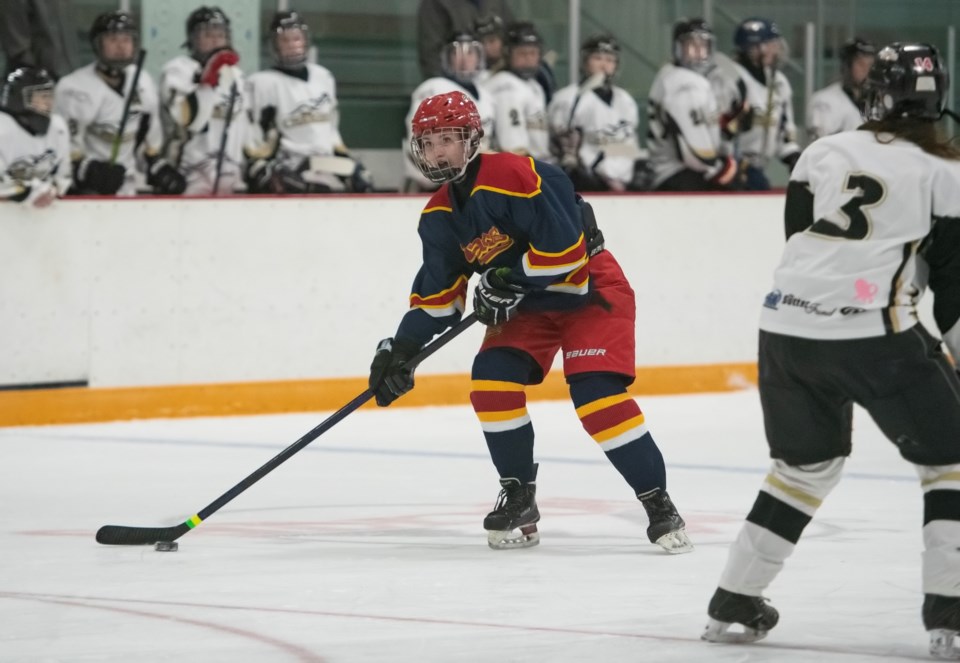 The Cochrane Chaos came out hot after their first loss of the season with a pair of wins over the Calgary Jags and the Lethbridge Eagles. File Photo

Coming off a tough 4-1 loss at the hands of the Calgary Titans on Oct. 19 in Alberta Junior Female Hockey League (AJFHL) action, the Cochrane Chaos put their nose to the grindstone and were able to come away with a pair of victories on Oct. 25 and 26.

The Chaos came into the game against the Jags with a 3-1 record, good for second place in the south division. The Chaos fired 36 shots on the Calgary goaltender, netting goals from Ryann Altwasser, Isabella Borbridge, Callie Cummins, Shea Dolan and Meryck Mucenski while also getting another solid performance from their own goaltender. Goaltender Jenna Weseen wasn't tested much, but still made 19 saves on 21 shots in a 5-2 Chaos victory.

The game against the Jags was one of those wins where the team celebrated until about an hour after the game because they had to get on a bus and travel three hours to Lethbridge where they played the Lethbridge Eagles at the Nicholas Sheran Arena on Oct. 26. Ryann Altwasser, Callie Cummins and Shea Dolan all scored for a second consecutive night. Summer Gibbons and Brooklyn Carels also potted goals for the visitors scoring one goal in the first, two in the second and two in the third. Lethbridge was only being able to respond once in the second frame for a 5-1 victory.

"We had an very solid outing versus the Jags as the girls were ready and our power play was very effective," said head coach Derek Loomer. "In the second period we had to react to a hard press by them and then we really controlled the third. Against Lethbridge, we were fairly sluggish but once again our power play was effective and the girls dug deep to get the win in a situation in which we were playing our second game in less than 24 hours."

"We try to ensure the girls are practicing hard against each other and focus on our game and not what the opposition is going to bring. We also remind everyone that the past is not necessarily representative of the current."

Weseen registered her fifth win in six games, making 21 saves on 22 shots. While Weseen hasn't been tested much throughout the first portion of the season, she has posted sparking numbers in the Chaos' net. She is 5-1 on the year with a 1.83 goals-against-average to go along with her .916 save percentage. She has only allowed 11 goals through six games and has made 120 total saves.

"Jenna is in her fourth year with us and has gotten better each year," Loomer said of his goaltender. "She proved herself as the best in the south last season and shows she was deserving of that award. The team is able to focus on the defensive game and their own roles while also trusting that Jenna can bail us out in most situations."

While Weseen has been solid in the Chaos' net, the team is also finding the back of the net with ease. Over the course of the last two games, Cochrane scored 10 goals off the sticks of seven players while nine players have goals this season.

"We have a really strong balance with this group," Loomer said when asked what's working on the offensive side of the puck. "We run four fairly balanced lines and girls are willing to share the puck around in order to get it to the shooter in the best position to score."

The Chaos will now only play one game, on Nov. 3 against Sherwood Park over the next two weeks. While there won't be any games to play, there will still be a lot of time to bond as a team as well as practice.

"We have our annual poker night fundraiser in Calgary on Nov. 8 so that will occupy that weekend and is a good team builder in addition to providing funds for the team. Sherwood Park will be a tough test on the road, but having just one game enables us to focus on preparing for that game. We also have some players returning at that time so we also have extra practice time to get them into game shape," Loomer said of how the Chaos will use their time off.

"Sherwood Park are always a good team and I expect a very fast game. It will be a great test and we will focus on motivation to ensure players are prepared to play and have a high energy for a full 60 minutes. If we are ready to work and bring our 'A' game, we have a great chance of getting the two points."

Cochrane's next home game will be Nov. 29 when they face the Lethbridge Eagles at Spray Lake Sawmills Family Sports Centre. Puck drop will go at 7:45 p.m.