A family member of the Chaos' first opponents this season tested positive for COVID-19, which has caused the final game in the pair's series to be deferred to a later date.
Nov 14, 2020 3:00 PM By: Tyler Klinkhammer 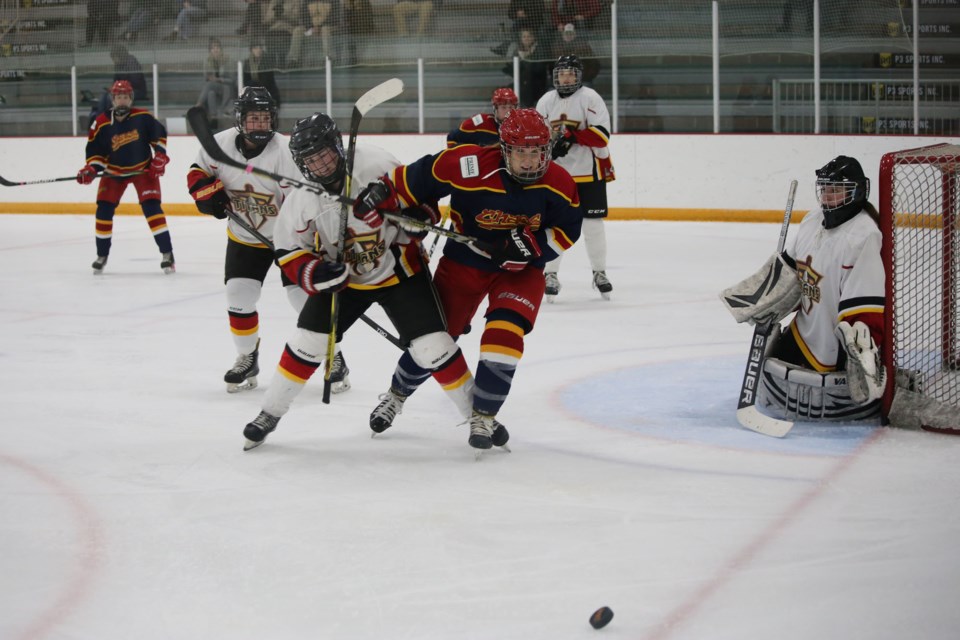 The Cochrane Chaos battled hard on Oct. 25 during the regular-season home opener at the Spray Lake Sawmills Family Sports Centre against the Calgary Titans. The cancelled game on Friday was the last in the series between the two teams. (Tyler Klinkhammer/The Cochrane Eagle).

COCHRANE— The Cochrane Chaos Junior A Women’s Hockey team has had its season interrupted due to a case of COVID-19 being discovered within its cohort.

A parent of one of the Calgary Titans players, the team paired with the Chaos for the first four games of its season, tested positive for COVID-19 during the week, said head coach of the Chaos, Derek Loomer.

“During the week the Titans got informed that one of the players, well their parent, tested positive for COVID, and therefore they were uncomfortable playing the game until she got back her test results,” he said. “She hadn’t heard anything by Friday, so they decided they weren’t comfortable playing that game so we had to cancel.”

Loomer said that the Titans player has since received her result, and the test came back positive.

The positive test result means that the Chaos roster now needs to get tested to see if there has been any spread of the virus among the team.

Loomer noted that they have not had any test results come in from the Chaos players yet, but expects that the results will be “trickling in” as the week goes on.

The Chaos will now begin to focus on the next series they play against the Central Alberta Amazons, with their first game scheduled for Nov. 21 at the Penhold Regional Multiplex.

Loomer said the practices for this week have been cancelled, but he is hoping to be able to hold practices the week before game one of that series. Given the timing of the exposure, which would have been on Sunday (Nov. 1), a 14-day period will have passed before Loomer hopes to begin practicing again on Monday (Nov. 16).

“The way this season was set up, we knew there would be some interesting challenges as we went,” he said. “It’s something that teams will have to deal with if they’re faced with this.”

He noted that the possibility of not getting a chance to practice before the games will not be a deterrent to his team.

“We’ll play our games if we are able to play them, let’s put it that way. If we have to do that with no prep time, that’s just the way it’s going to be this year.”