"We got out to a hot start. I think we were pretty comfortable throughout (the game) running our offence. We have such a great gameplan and playbook for every game which really helps being able to execute at all times."
Nov 14, 2019 4:40 PM By: Troy Durrell 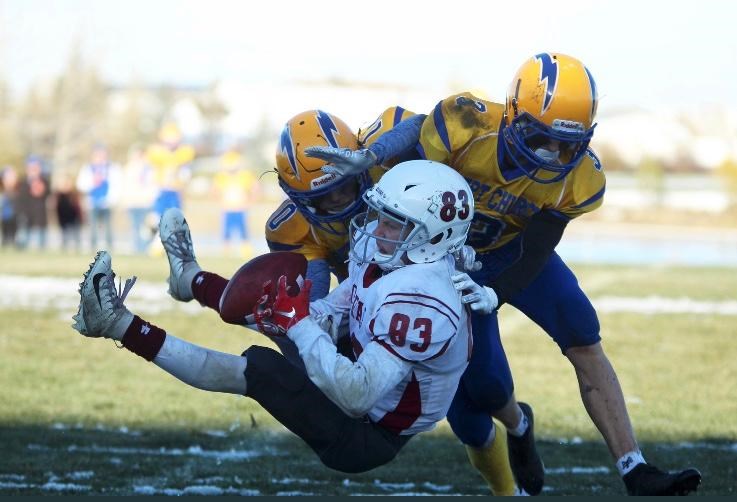 The Cochrane Cobras football have completed the first step after defeating the Winston Churchill Bulldogs 39-7 on a chilly evening in Lethbridge on Nov. 9.

The Cobras scored a touchdown on their opening drive of the game after successfully converting a fake punt where running back Fox Bell took the snap and scrambled for a first down that resulted in quarterback Xavier Vaillancourt finding receiver Derek Reid in the endzone for the game's opening touchdown.

The Cobras's defence forced the Bulldogs into a number of two and outs like they've done to the opposition throughout the year and gave the offence a great field position nearly every time they got the ball. Running back Chase Hunt scored two touchdowns to put the visitors up 21-0 before Vaillancourt connected with Ethan Stanley for a deep touchdown, and then again with Evan Larsen for the two point conversion to go up 29-0.

Winston Churchhill got on the board after a fumble recovery touchdown and the half was finished with Oscar Hughes kicking a field goal to go up 32-7. The second half was much of the same from the Cobras defence and Ty Metcalfe scored another touchdown on a deep pass from Vaillancourt to round out the scoring at 39-7 in favour of Cochrane High.

Vaillancourt said the team played well in all three phases of the game and that the team was ready to play from the opening kickoff.

"We played well on all phases of the ball," said Vaillancourt of the team's victory. Although we made some costly mistakes in the red zone and are going to have to clean that up."

"We got out to a hot start. I think we were pretty comfortable throughout (the game) running our offence. We have such a great game plan and playbook for every game which really helps being able to execute at all times."

The Cobras were dealing with some injuries near the back half of their regular season, but got a lot of bodies back just in time for provincials.

"Yes we have a lot of our team back now," Vaillancourt said of the team's injury woes. "Not only receivers and running backs but also linemen like Owen Woroby, having our guys back at this point in the season just increases our ability to run plays."

Cochrane will now return home to Spray Lake Sawmills Legacy Field on Nov. 16 in order to tangle with Crescent Heights Vikings out of Medicine Hat for the regional final. The Vikings took down the W.H. Croxford Cavaliers 22-21 in overtime. Kickoff for the game between Cochrane High and Crescent Heights will go down at 1 p.m.