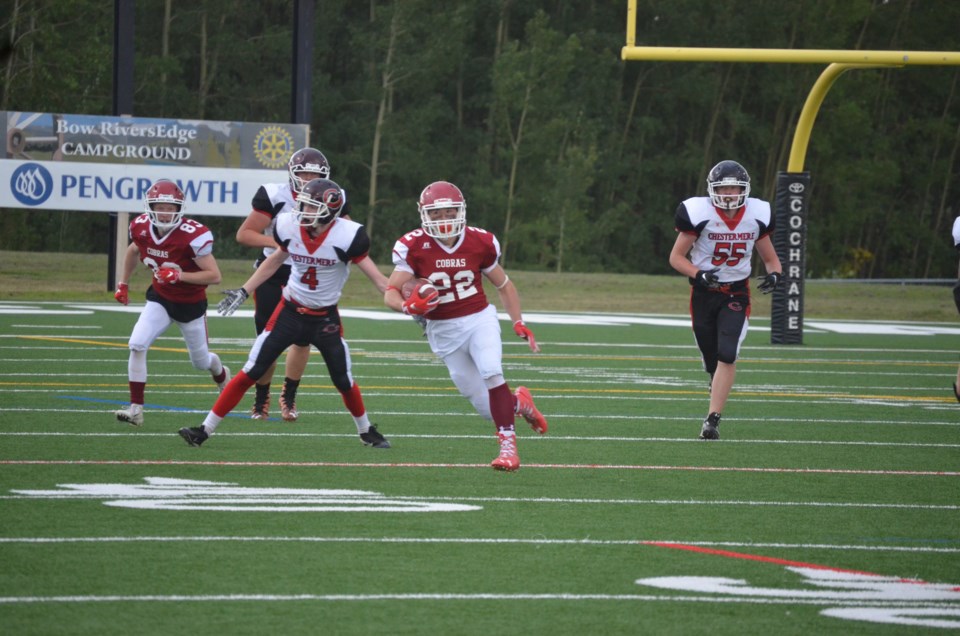 Chase Hunt and the Cochrane Cobras won their opening game of league play by a convincing 78-0 score. Photo by Troy Durrell

The Cochrane Cobras football team picked up exactly where they left off last season as the team scored on its first two possessions, racked up 41 points in the first quarter en route to a convincing 78-0 victory over the Chestermere Lakers in the first game of the Rocky View Sports Association (RVSA) season on Aug. 30 at Spray Lake Sawmills Legacy Field.

"It went pretty good from our standpoint," said co-head coach Rob McNab. "Our first team offence went in and scored right away, got the ball rolling and then after the first quarter they all sat, the second and third-string guys got in and did well so it was a good day for everyone."

"I liked that we were playing full speed. We came to play ... defensively, those kids were flying around. They missed some tackles but not many and the offence looked fairly crisp for not having that exhibition game. We had Xavier and those receivers clicking early and they're pretty hard to defend at the best of time. They ran some good routes and looked really good doing it."

"We also need to brush up on the penalties. We can't have that many over the course of the game ... Chestermere struggled with it too but we need to get these rule changes underway and get going with that."

Both teams were a little jumpy early in the game with penalties and younger players sometimes not knowing where they were supposed to be on certain plays. McNab said it was nice for his team to get the game over and done with after only having one week of practise and no exhibition games or jamboree.

"You usually get an exhibition game to work the bench and see how you're going to work things and we didn't get one this year because they started the league right away," McNab said. "We were shuffling guys in so a lot of the mistakes with the substitutions were the younger players. They get a little confused because they're young kids in their first game so they're nervous as well. We have a few things we need to iron out but I think both teams were struggling with that a bit as well."

"The first quarter went very smooth for us, then you saw the penalty for too many men on the field or whatever it was for us but the other thing is, there are new rule changes in the game right now with some blocking rules and things like that. We've got to get our kids used to these new rules and playing with them so it's going to take a little bit. Even at the USports level, I was talking with the Dinos coach (Wayne Harris) and they had 51 total penalties so these new rules changes are going to take some time."

McNab pointed out that there were a few players who really stood out over the course of the game.

"I think our Grade 10 quarterback Ethan Picard did a really good job," McNab said. "We're a hurry up team so I'm signalling things in constantly, it was raining and the whole bit ... he played three-quarters of the game and handled himself really well. The other was our Grade 10 running back Shaun Clazie, I thought he did a really good job. He ran hard, ran downfield and was hard to stop ... I think he played really well and we've got a good one in him. I was very pleased with those two individuals among others as well."

The game suffered through a 30-minute weather delay due to lightning in the area, something McNab said he's never experienced in his 30-plus years of coaching.

"It's up to the referees, they keep the time and look for lightning to determine if we could keep playing or not," McNab said. "We just went down in the endzone, went through our warm-up lines and had some talks with the guys about reloading and getting back into it. I thought our kids did a good job because we were soaking wet and getting cold ... I've never had that before. We've had rain but not lightning before so it was different for me as well."

The Cobras will host the W.H. Croxford Cavaliers on Sept. 7 at Spray Lake Sawmills Legacy Field.