The Cochrane Cobras continued their winning ways with a victory over the W.H. Croxford Cavaliers on Sept. 7.
0
Sep 13, 2019 2:03 PM By: Troy Durrell 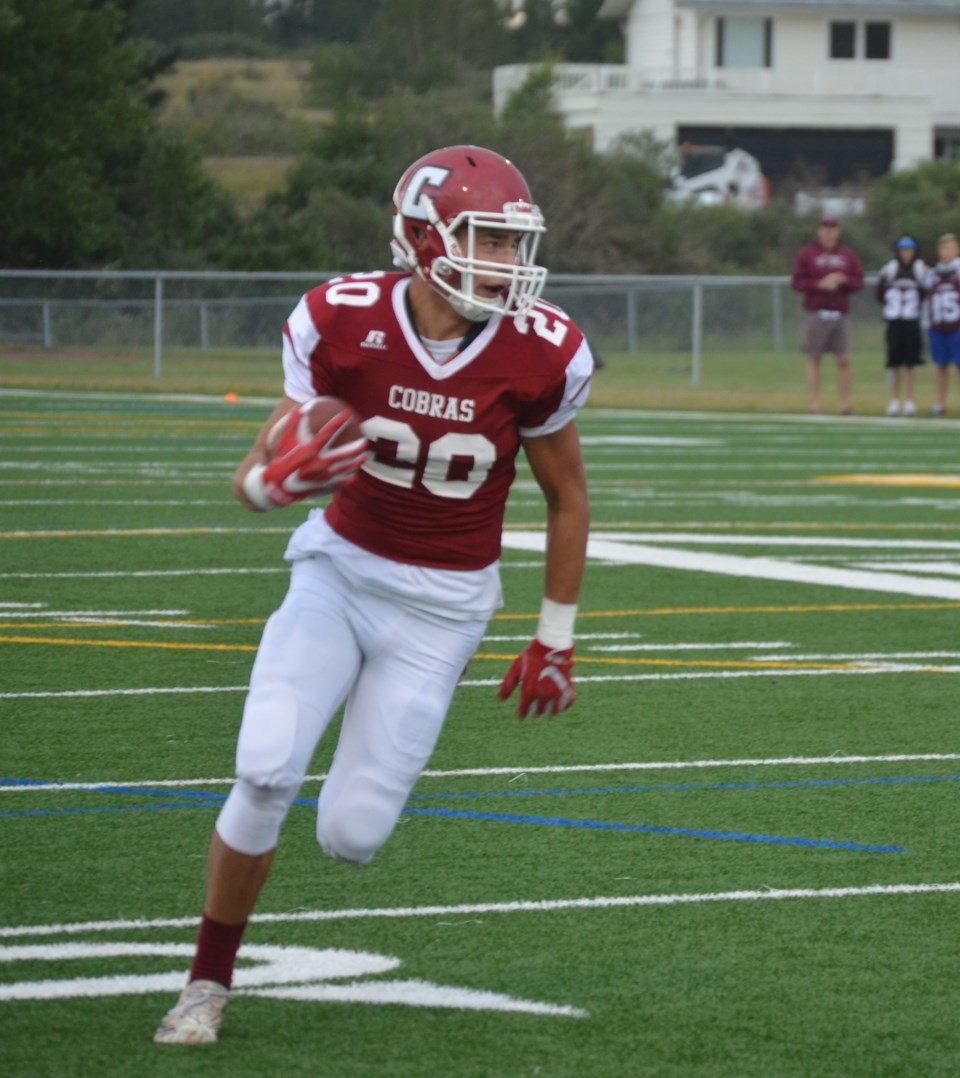 The Cochrane Cobras proved that last week was no joke. Fresh off their 78-0 victory over the Chestermere Lakers in their week one Rocky View Sports Association (RVSA) opener on Aug. 30, the Cobras once again took to the turf at Spray Lake Sawmills Legacy Field on Sept. 7 to tangle with the W.H. Croxford Cavaliers. The Cavaliers were also on the field last week when they hosted the Bow Valley Bobcats in an exhibition game.

Led by an outstanding performance from quarterback Xavier Vaillancourt who completed 15 of 16 pass attempts, totaling over 370 yards offensively and five touchdowns, the Cobras rushed out to a 44-point lead at half time where he and the starters were pulled in favour of the back ups, ultimately finishing the game with a 47-7 victory.

“We played an awesome first half on offence and defence,” Vaillancourt said of his team's performance against Croxford. “We were up 44-0 by the end of the second quarter. The young guys went in and held their own in the second half but we had a couple of unlucky plays and ended up only scoring three more points.”

“We need to cut down on penalties though. When we get to the playoff run, we can’t be wasting good plays with bad penalties … but that’s something that we’ll get ironed out with time. There are some new rules changes that will require an adjustment period. Other than that I think we’re rolling right now.”

The star quarterback, who recently signed with the University of Calgary, said he and rest of the offence have really clicked early in the season due to familiarity with one another.

“We’ve had great chemistry so far this year,” he said. “I’ve been playing with those guys all throughout my minor football career. We grew up playing together and you could say we’ve grown to play well together.”

“Coach (Rob McNab) has been calling great games so far. I have no reason to complain. I think we can execute all of our playbook very well and we are going to need to keep working all of the aspects of our game as we move forward throughout the year.”

Through the two games Cochrane High has played, Vaillancourt has been playing at an elite level. He has completed 20 of his 21 attempted passes for over 500 yards and nine touchdowns with no interceptions. He is currently on pace to smash his totals from last season where he threw for an average of 250 yards per game with 25 passing touchdowns and four rushing.

“I’ve liked the way I’ve been playing. I think my game has improved in being able to make plays outside the pocket,” he said. “So I’m happy with that and also , of course, throwing the ball from the pocket.”

“We didn’t get a preseason this year but I think we were able to get into our groove right out of the gate. I think, in total, our starting offence has only punted once this year. I think that the chemistry that we all have on the offensive unit has a lot to do with that.”

The Cobras are now 2-0 in league play scoring a league-high 125 points and only allowing seven on defence.

“Having such a stellar defence makes it easy on us over here on offence, knowing that they’ll get the big stop when we need them to,” Vaillancourt said. “Even if we happen to stall out on a drive we are always confident that the defence will get us back on the field as soon as possible … sometimes they get off so quickly that we can’t even get a sip of water. They’ve been that good.”

The Cobras will hit the field once again on Sept. 14 when they take on the George McDougall Mustangs. Kickoff will take place at noon at Spray Lake Sawmills Legacy Field.