"I think they’re protectors. I think they take on that role and take pride in the fact that they can protect and be the most important part of the team, if you ask me, other than the quarterback. If you don’t have a lineman, you’re not playing any type of high level."
Nov 26, 2020 2:00 PM By: Tyler Klinkhammer 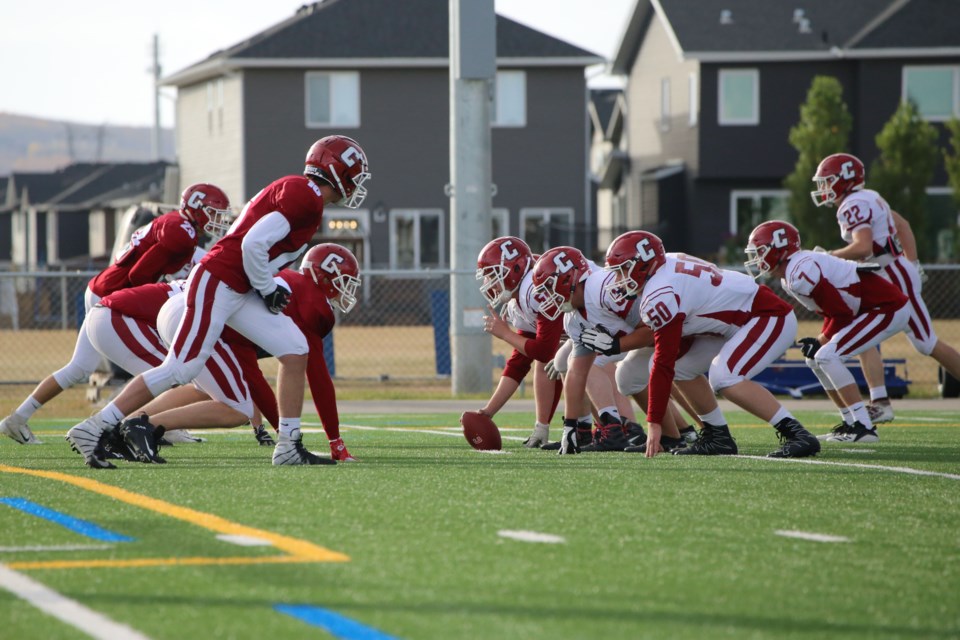 The Cochrane Cobras face off on the turf at Bow Valley High School during a competitive scrimmage on Oct. 8. (Tyler Klinkhammer/The Cochrane Eagle)

COCHRANE— The Cochrane Cobras football team took a few moments on Wednesday (Nov. 11) to recognize the efforts of some of the underappreciated players in football— The linemen.

It is easy to forget about the linemen in football while quarterbacks are throwing amazing passes, and receivers are making incredible grabs.

But none of those highlight plays are possible without the core of the team protecting the quarterback and leaving him free to survey the field.

Head coach Robbie McNabb said the position of lineman has long been undervalued in football, and it is important to point out how much those players contribute.

“It was a joke when I was playing university football, our coach once said ‘the only people who respect O and D-linemen are your mom and dad ... Playing quarterback myself in university, I don’t know if I always appreciated the linemen enough,” he said. “They protected my butt all those years. I don’t know why you play that position, but we need them.”

Linemen, McNabb said, are a “different breed.” They play one of the most demanding positions in the game and get very little glory or recognition for their efforts.

It takes a special type of person, he said, to take up the mantle of a lineman in football.

“I think they’re aggressive kids by nature, I think they’re bigger kids by nature and I think they’re protectors. I think they take on that role and take pride in the fact that they can protect and be the most important part of the team, if you ask me, other than the quarterback. If you don’t have a lineman, you’re not playing any type of high level. You talk about NFL, CFL, I don’t care what league it is.”

The tradition has been kept alive for more than four decades by one of the founders of the Rocky View Football league, Verne Friesen.

Every year, Friesen contacts BOMAG to secure the hats, and the Cobras send back some t-shirts and a short video thanking the construction equipment manufacturer.

The linemen on the Cobras roster really appreciate the ceremony, and many of them have a reverence for the hat.

“Those kids love that. To this day I’ll go to the school and see some of those linemen wearing those hats,” McNabb said. “You see them when they come out to our games, ‘hey, that’s a BOMAG hat from 10 years ago.’”

The hat itself is not necessarily the prize, McNabb said, but it is a representation of the sacrifice and greater contribution that the players make to the team.

This year especially, the kids on the team needed something to lift their spirits, McNabb said, and he hopes that this ceremony did the trick.

“It’s amazing what a lift it can give kids on a 10-dollar hat. It’s not the hat, it’s the whole representation of what that hat is,” he said.

During a season with no competitive play, it was critical that the Cochrane Cobras continue hosting these types of ceremonies.

Continuing these traditions is essential for keeping the Cochrane Cobras’ culture alive and thriving at Cochrane High School.

“It was all about, this season, keeping the culture alive at Cochrane High School and the Cochrane Cobras Football Program. We needed the young kids to see what the program is all about, and we needed the older kids to be the leaders and lead those young kids through,” McNabb said. “This one was probably one of the ones that was really important because linemen, they don’t get all of the accolades that receivers and quarterbacks get— It was a great thing to do.”