The Cochrane Cobras and Bow Valley Bobcats were back in action on the gridiron.
0
Oct 9, 2019 3:40 PM By: Troy Durrell 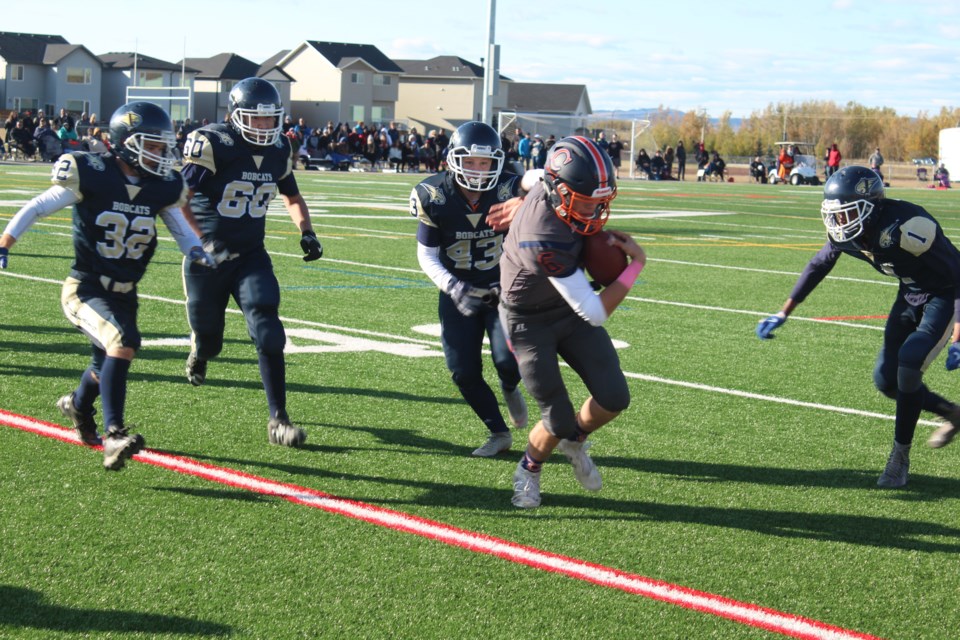 The Bow Valley Bobcats played their first home game of the season, losing 21-10 to the W.H. Croxford Cavaliers. Photo by Troy Durrell

The regular season is almost up and the Cochrane football teams in the Rocky View Sports Association (RVSA) are hitting the home stretch.

The Cochrane Cobras are on a bye week, in which they used for a little bit of team bonding as well as exhibition play. The team travelled to San Francisco and took on the King's Academy Knights on Oct. 5. Cochrane High lost 42-19 to the talented Knights squad. The Cobras tried their hand at playing American rules, with the four downs instead of three like they're accustomed to. The team then took in the Stanford Cardinal and Washington Huskies National Collegiate Athletic Association (NCAA) as well as a trip to Alcatraz.

The Cobras will look to finish the season undefeated as they take on the also undefeated Bert Church Chargers in a battle of who will finish in first place in the league. The five-time defending provincial champions have scored 211 points while only allowing 14 against. Bert Church has posted similar numbers, outscoring their opponents 225-28. Kick-off will go on Oct. 11 at 4 p.m.

Meanwhile, in Cochrane, the Bow Valley Bobcats had their first home game of the season against the W.H. Croxford Cavaliers on Oct. 5 at Spray Lake Sawmills Legacy Field. Bow Valley got on the board first when kicker Autumn Carr booted a field goal from just inside the 25. Croxford bounced back with the next three scores taking a 21-3 lead. The game finished with a Ben Oliver touchdown to make it 21-10.

"I feel in the Croxford game we did some very good things," Bobcats head coach Matt Lane said. "We as a group didn't quit on each other and fought until the end. The feel on the sideline was very positive, now we know we have work to put in still and the kids are working really hard to make themselves better."

"The kids take each opportunity each drive as the start of something new and we as a group will never quit. Everyone in this organization has worked hard and won't quit which is all we need in order to get better each and every day."

"It was great to play in our first home game. We have great support around our community and it's amazing to have them out in numbers to show their support for us. It's always a bonus and a great thing to play in front of family and friends."

Kicker and punter Autumn Carr has really stepped up her play, kicking the ball well while also making a huge tackle early in the third quarter. Lane said he's been really impressed with her play.

"Autumn is great," Lane said. "She works hard at practice and has the drive to get everyone around her better. She fits in great with the team and is a pleasure to work with. Also when your kicker likes to put a shoulder down every now and then it just brings life to the kids and everyone wants to follow and work as hard as she does."

While the wins haven't been piling up for the Bobcats, they're a young team that will grow with the leadership of their head coach.

"I've seen great things come from this group of kids and I know they want to put in the work in order to get themselves better and ready for what's to come," Lane said.

"The intensity in practice from day one to now is much improved. The kids themselves feel better each and every day and are starting to learn the concepts. Even when we study film, they're more engaged and taking it seriously which is the best way they can learn. I'm happy to see the team getting and wanting to be better."

The Bobcats will finish up their regular season on Oct. 10 when they're once again at home to play the 3-2 Springbank Phoenix who are fresh off a 21-13 loss to Bert Church.

"The main thing we need to do is execute our plays," Lane said. "Last game (against Croxford) I think we only took three minor penalties which is great so we need to keep that up and not take penalties that hurt us. If everyone does their job, and trusts the guy beside him will do his (job), we should be just fine to compete with Springbank."