"All the seniors will remember this game forever, and we are focused and committed to leave Raymond with a win."
0
Nov 23, 2019 2:50 PM By: Troy Durrell 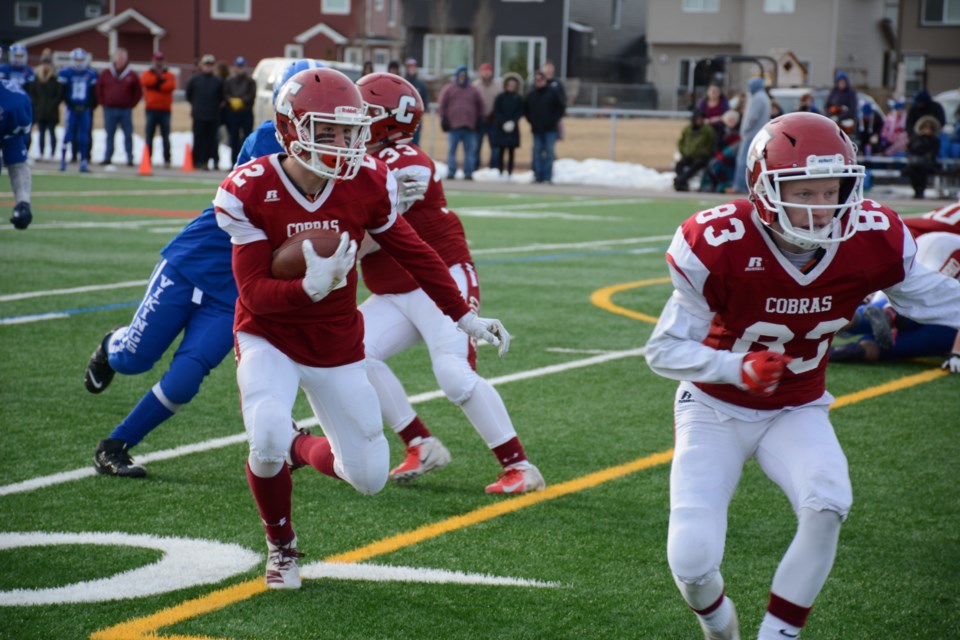 The Cochrane Cobras are off to their sixth straight provincial title after a 42-0 victory over the Crescent Heights Vikings on Nov. 16. Photo by Troy Durrell

The word "dynasty" gets thrown a lot in sports, but the phrase fits the Cochrane Cobras football team after they decisively won their sixth consecutive Tier 3 provincial Regional Final with a 42-0 victory over the Crescent Heights Vikings on Nov. 16.

The win pushes Cochrane High to the provincial championship game where they will face off with the Holy Rosary Raiders for the third time in as many seasons when the two teams square off at Comets Stadium in Raymond on Nov. 23.

In the game against Crescent Heights, the Cobras got off to an early start like they have so many times this season and never looked back. It started off when quarterback Xavier Vaillancourt led the Cobras offence down the field before connecting with Derek Reid to give the Cobras a 7-0 lead. After the Vikings fumbled on their first offensive possession, which was recovered by safety William Hunter, Cochrane once again found paydirt with a Fox Bell touchdown run after he rumbled his way into the endzone.

The Cobras put together another couple of drives that didn't end in points before finally reaching the endzone once again on a Ty Metcalfe reception to make it 21-0. Vaillancourt connected on a number of passes to set up a Chase Hunt score to make it 28-0 going into halftime.

The second half was much of the same with Derek Reid and Chase Hunt finding the endzone for the second time in the game to make it 42-0, while the defence forced a number of Vikings two and outs and pitched a shut-out for the third time this season.

"I found that that I just had to find holes in their coverages," Reid said of his two touchdown performance. "From there I trust that Xavier can hit me with the ball in stride so that I can make a play."

"I think our offence in general had a great game," said running back Chase Hunt. "We prepared well and studied film on Crescent Heights in preparation for the provincial semi-final game. Our offence executed well and the offensive line and receivers had great blocking which allowed the run game to open up. The coaches also told the team that it could have been our last game of the season, which I personally think played as a motivational factor for me to run hard and aggressive. I wanted to win and the rest of the team did as well which is why we continue our provincial run to pursue our goal."

The Cobras suffered some injuries to their offence throughout the year, which caused them to maybe rely more heavily on the run game and stellar defence than they're acustomed too. Now that those players are back, Reid said the team has been feeling a bit confident in their ability to move the football.

"We just have to get our rhythm back," he said. "It's all about timing on our offence and knowing who has what responsibility. Now that we have some of our key players back we need to practice hard so we can accomplish our goal from the beginning of the year, winning the provincial title."

The Cobras will take on the Raiders in the championship game, a team that the Cobras are more than familiar with. Reid said the team is excited for the opportunity but are also focused on the task at hand.

"It's an exciting feeling. It's always fun to play for a provincial title," Reid said. "However we can't get too far ahead of ourselves ... we need to focus on working hard in practice and doing everything we can to prepare for the game. Thankfully, our team has been in the position before and we know what it it takes to win big games. I think that will help us this week leading up to the game."

"It's quite significant for us as a team because every year we have one main goal and that is to make provincials and win a championship," said Hunt. "We are a team that also realizes that playoffs are a one game elimination and to be one of the last teams practicing in the province at this time of year is an accomplishment and one step closer to our goal."

"This is the last game (for the seniors) of our high school careers," Reid added. "Some of us are going to continue on to the next level but some won't. All the seniors will remember this game forever, and we are focused and committed to leave Raymond with a win. Personally this might be my last football game and I value it as the most important game of my career."