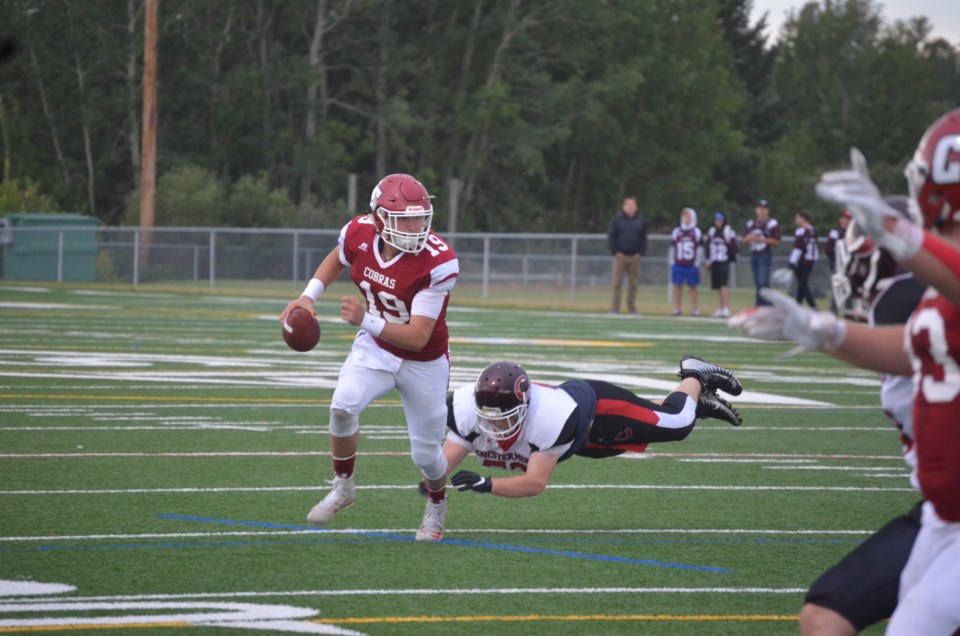 Xavier Vaillancourt looks for a pass down field in a game against the Chestermere Lakers on Aug. 30. Photo Credits: Troy Durrell

Cochrane High Cobras quarterback Xavier Vaillancourt signed his letter of intent on Sept. 1 to play football at the University of Calgary with the Dinos program next season.

"The University of Calgary is obviously a great program and I really like the coaches," Vaillancourt said of why he chose the Dinos over the many other offers he had received. "I think I fit in well with the system and with the type of person the Dinos are looking for. I also love my life in Cochrane, I love the outdoor lifestyle and enjoying time with my friends and family so that played a role as well."

"I think it was a good decision for me but it was a long process. In the end, my life here is great and I love the coaches and program with the Dinos."

The young Cochrane athlete is in his third season with the Cobras after playing several games in Grade 10 when former quarterback Brett Conlon went down with an injury. The 17-year-old gunslinger took over full time for the Cobras last season where the 6'3, 210-pound quarterback helped the Cobras to a perfect 6-0 record throughout the regular season and helped them win two playoff games to give them the Rocky View Sports Association (RVSA) league championship after a 35-2 victory over the Springbank Phoenix. Over those eight games, Vaillancourt averaged just over 250 yards per game through the air while throwing for 25 touchdowns and adding four rushing normally getting pulled at half time due to the Cobras having such a big lead on their opponents. Cochrane High scored a league high 321 points in large part due to their aerial attack. He was one of six players named the Most Valuble Player (MVP) at the Cobras team banquet last December.

Over the course of last season he also had numerous highlights at the national level. Vaillancourt was one of 73 players that took part in the Canadian Football Chat (CFC) Prospect Game June 1 at TD Place Stadium in Ottawa. He went 6/9 for over 50 yards, one touchdown with two interceptions.

Vaillancourt said he has had a lot of support from the Cobras and their coaching staff as well as his family in order to get him to where he is today.

"Coach (Rob) McNab has done a lot for me and I really appreciate it," he said. "He's been teaching me very well throughout the years and created a program that leads players the right way to the next level. My dad was also crucial in making me the player I am today and I am very thankful to have two great coaches like that in my time."

The young quarterback won't be alone at the U of C as teammates Joseph Bell and Dylan Neis both recently signed on to play with the program in the spring.

"Having guys there is going to be awesome," Vaillancourt said. "They're going to help me be part of the team and it's going to be great to have some veteran leadership."

He also said there are a few things he'd like to improve on this season before he gets to U of C while also setting his goals for the upcoming season.

"I think I really need to be physically ready fpr the Dinos when I get there. That way I can focus purely on the playbook and getting 100 per cent confident with play calls and understanding the system," Vaillancourt said.

"As for goals this season, provincials is the number one goal. But I want to play well and have better stats than last year and lead the team to the title."