Cochrane athletes tearing up the gridiron 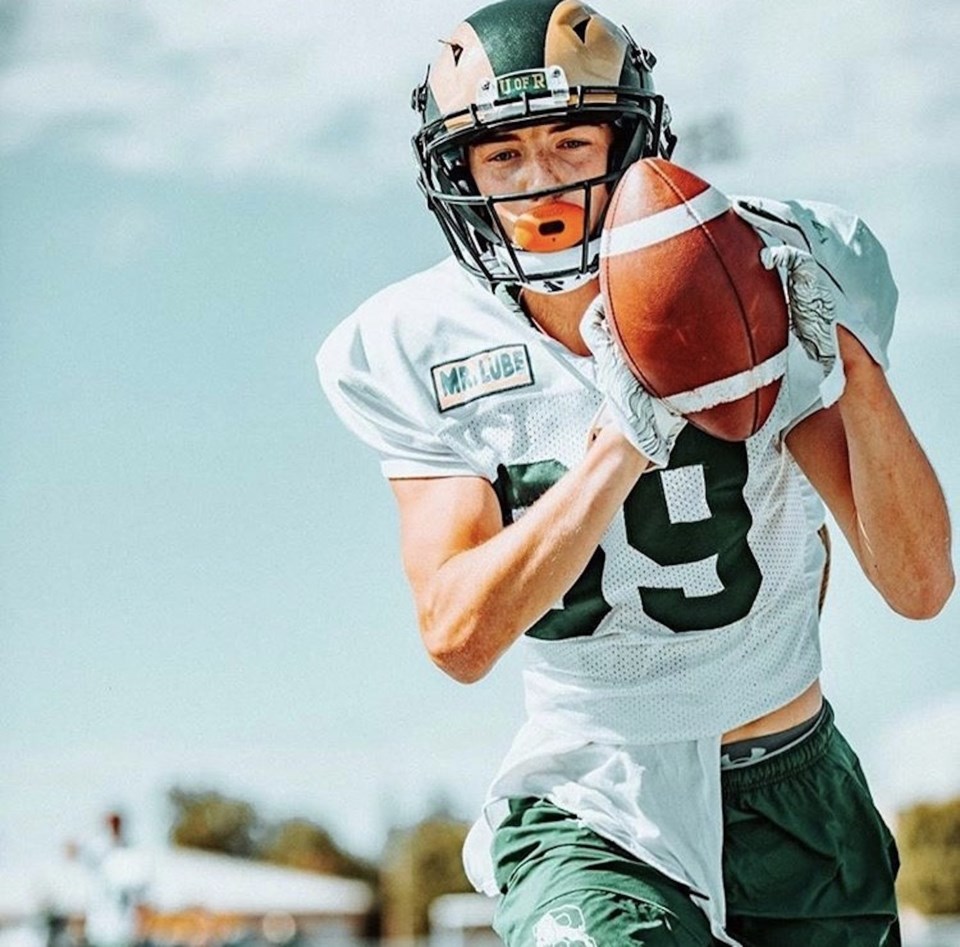 Dawson Laye and many other Cochrane athletes are making their mark at the University level. Photo courtesy of the CFL

Cochrane athletes are looking to set the tone on the gridiron this season, with both the Bow Valley Bobcats and Cochrane High Cobras well underway with their respective seasons. But where do those kids go once they graduate? Some may take off for work or more schooling, but some continue their football careers in the National College Athletic Association (NCAA) or USports with their new schools. Here is a list of those players who are representing the Town of Cochrane at the next level.

There are a pair of receivers suiting up for the University of Regina Rams this season with fifth year Kyle Moortgat and first year Dawson Laye both wearing the green and gold with another Cochranite Adam Rask on the injured reserve and is currently an assistant coach for the receivers. Three games into this season, Moortgat has been the only one of the three to get his name on the stat sheet in the Rams offence, catching a total of 16 passes for 217 yards and one touchdown in games against UBC, Alberta and Saskatchewan. He entered the season needing just 53 receiving yards to become the 19th player in school history to collect 1000 yards overall in a Rams uniform. He did that in the opening game with five receptions for 90 yards against the UBC Thunderbirds.

"This season has been going really well so far," Moortgat said of his early season success. "We've been battling some bumps and bruises throughout the first couple games but overall I'm very happy with how I've been playing. I am more confident in my playing ability this year more than ever ... just from all the training I did over the off-season. I believe my confidence has grown a lot throughout my years I've been here, each year I gain more and more experience and learn from the previous season which has really helped me grow as a player."

There has been an huge boost of talented football players from Cochrane who have found their way onto university teams, something that Moortgat says come down to coaching and mentorship they've received at the high school level.

"I think it comes down to the type of coaching and mentorship we've gotten going through the football programs in Cochrane. All of those coaches have a lot of experience from their time as players all the way up to being great coaches," Moortgat said. "They don't only make you a better player playing on the field but they make you a better person off it, which I believe attracts a lot of universities to take interest in the guys coming out of Cochrane. In the end universities aren't just looking for the most talented players, they're also looking for players who have great character that will make the rest of the team better."

The Rams aren't the only team with a strong Cochrane connection as the local University of Calgary Dinos are the home of second-year Erik Nusl, who is coming off major knee surgery and has worked his way back onto the active roster while first year receivers Dylan Neis and Joseph Bell will be spending the season redshirting. With some key receivers on the Dinos roster from last season moving on due to graduation or the move into professional football, Nusl has been getting his chance to strut his stuff. While being held off the stat sheet in the team's first game against Alberta on Aug. 30, he bounced back with three catches for 20 yards against Manitoba and five catches for 50 yards this past weekend against UBC for eight total catches and 70 yards.

Former Cochrane Lions quarterback Des Catellier is now holding down the position with the Manitoba Bisons. The fourth-year player has had a decent start to his season, completing 61 of his 102 pass attempts for 680 yards, four touchdowns and four interceptions. He also suited up in eight games last year for the Bisons where he threw for over 2,100 yards and 16 touchdowns to seven interceptions. He also played in the East-West Bowl, a game used for players eligible for the 2020 Canadian Football League (CFL) Draft.

Former Cochrane Cobras star receiver Jack Tocker is now trying his hand at defensive back with the Guelph Gryphons and is in his second year with the team. The former Rocky View Sports Association (RVSA) All-Star has yet to find his name on the stat sheet through three games this year.

Similar to Tocher, former Cochrane Cobras quarterback Tae Gordon is now at a new position with the 5'8, 175 pound athlete is now playing receiver with the Queens Gaels. He has yet to play in the three games Queens has had so far this season.

Cochranite Justin Sambu is suiting up with Maine Black Bears of the NCAA. The Redshirt Freshman (second year) has gotten into one game so far this season against Sacred Heart on Aug. 30 where he registered one tackle.