“It’s kind of that old adage, you get out of it what you put into it. I think wrestling is one of those things— the more you practice, the harder you drive, the more disciplined you are, the more you’re going to get out of it."
Oct 2, 2020 10:00 AM By: Tyler Klinkhammer 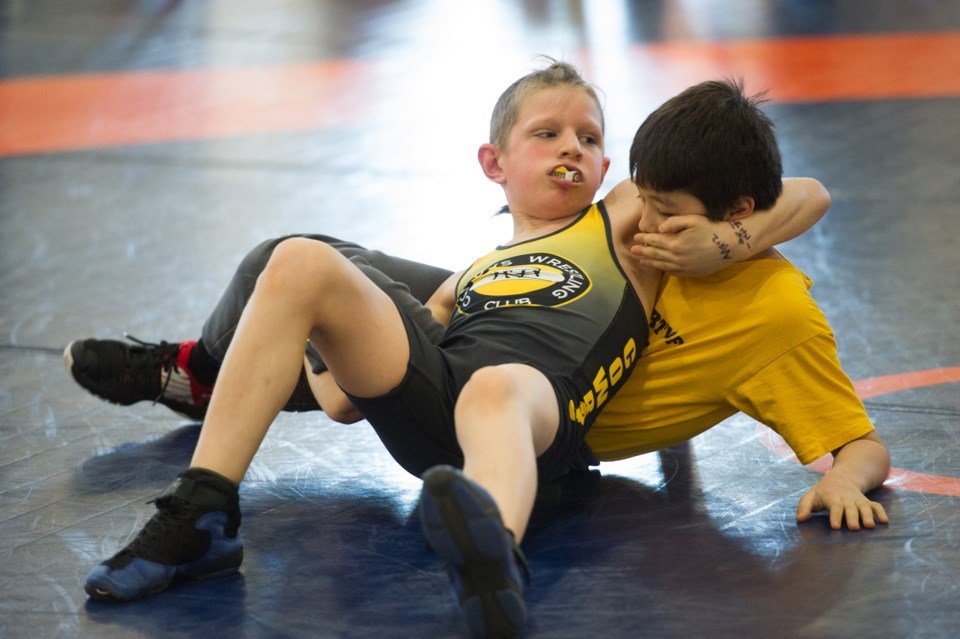 Chase Adams takes down his opponent at the Cochrane Cowboys Invitational tournament in March 2019. File Photo.

COCHRANE— The Cochrane Cowboys Wrestling Club will be back on the mat next Tuesday (Oct. 6) for another season of wrestling at the Spray Lake Sawmills Family Sports Centre.

The Cochrane Cowboys programming will be business as usual with one major change in the upcoming season.

Gord Peavey, last year’s assistant coach of the varsity Dinos wrestling team at the University of Calgary, will now be filling the head coach position with the Cowboys wrestling program.

Head Coach Vern McNeice, along with James McKeage and Frank Dostaler have been long-time coaches at the Cochrane Cowboys, and are largely responsible for the program's success, said Mike Labelle of the Cowboys.

“We’ve had 14 years of fabulous coaching with the three members that started the Cochrane Cowboys,” he said.

The three of them have been coaching as volunteers for the duration of their involvement with the program.

In the spring, the Cowboys programming hit a “speed bump,” LaBelle said, when COVID-19 interrupted the season.

LaBelle noted that the kids enrolled in the club were very resilient.

“We’re fortunate that we have the morale of the kids that we do,” he said. “As disappointed as they were last year they’re super excited to get back on the mat next Tuesday.”

The nature of wrestling is purely competitive, so while other sports aren’t actively engaging in a competitive way, athletes who crave competition might find that wrestling is a good way to “relieve a little stress,” LaBelle said.

There are no official competitions planned at this point, but LaBelle said that there is still a lot to be gained by participating in wrestling.

“It’s kind of that old adage, you get out of it what you put into it. I think wrestling is one of those things— The more you practice, the harder you drive, the more disciplined you are, the more you’re going to get out of it,” he said.

The program has had a lot of success in the past, and the hard work and dedication will persist through this upcoming season as well, LaBelle said.

“We have a number of kids that are hopeful to make Team Alberta and represent their province at the Canada Summer Games,” he said. “They’re still going to work for it, they want to go to the national tournament. It’s pretty amazing when you can take an athlete from a growing city like Cochrane and they can go to one of the large cities in our country and win a national championship— It’s a pretty amazing accomplishment.”

For any questions about the schedule, how to register or for further details on the program visit the Cochrane Cowboys Facebook page.

Star goaltender Devin Buffalo wants to help Indigenous youth on the ice and off
Oct 22, 2020 12:45 PM