"My voice was hoarse at the end, of course, from cheering them on, but also out of the excitement of seeing them do so well. They went out and ran their hearts out and had great races. I feel so inspired and proud of them.”
Nov 13, 2020 5:00 PM By: Tyler Klinkhammer 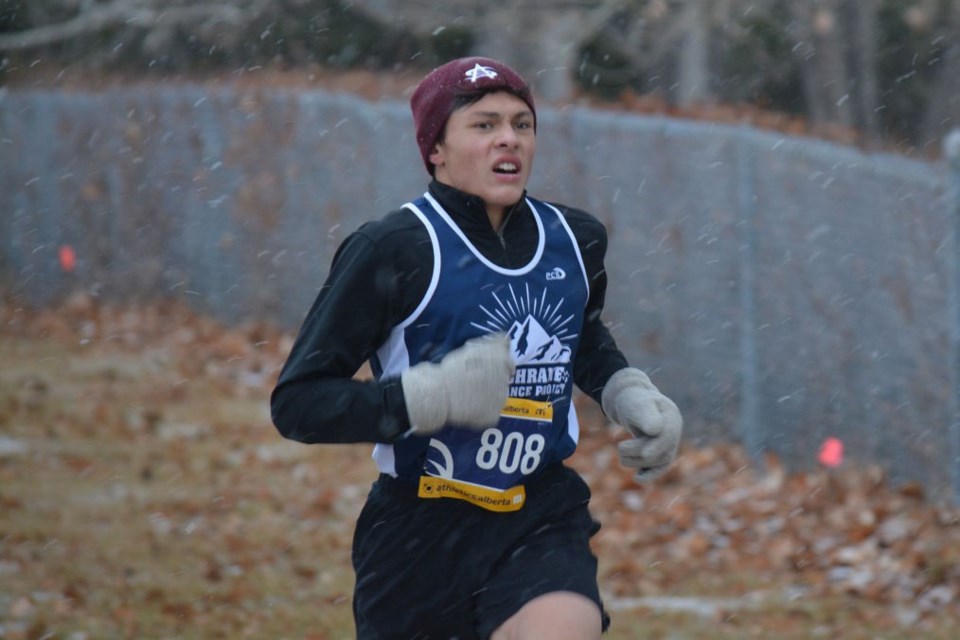 Nick Hooper from the Cochrane Endurance Project runs through the wind and snow during the Alberta Athletics Cross Country Provincials on Nov. 7 at St. Mary's University. Photo credit: Tony Moores.

Among the accolades were two team medals, five individual medals, 13 athletes in top 10 spots, and another seven in top 20 positions.

The Boys U16 won gold in the team medal competition, with one athlete from that group, Terrell Keys, earning himself a silver medal.

Courtney Brohart earned a bronze medal in the Open Women’s eight-kilometre race with a blistering time of 32:39.

One of the assistant coaches of the Cochrane Endurance Project, Ed Nowicki, raced on a sprained ankle and still managed to win a bronze in the Master’s Men's eight-kilometre with a time of 39:13.

“I had a bad ankle from training on Monday before the race,” he said. “Even though it was really, really sore I thought if it feels OK on race day, I’m going to do it. I was slower than I normally would be, but it was fun.”

Despite the ankle slowing him down and the blustery weather on Saturday, Nowicki had nothing but good things to say about the competition on Saturday.

“It just felt good to be there, running,” he said. “It felt good being out there with my friends and colleagues, doing this sort of thing. It was good. I felt really good about it.”

Nowicki was not the only person on the Cochrane Endurance Project’s roster running through an injury.

Fifteen-year-old Brendan Maguire has been wrestling with an Achilles injury for six months that causes significant tightness in his calf and produces shin splints.

Brendan placed sixth overall in the U16 Boys four-kilometre race, with a time of 15:29.

“I’ve been going to physio for like three months, and I ran for two weeks before the race, and then the race. So, I only had two weeks to prepare,” he said. “At one point it was like really bad, it really hurt to walk.”

Brendan said his physio involved a six-week strength building program where he would run for 15 minutes twice a week.

He noted that his progress was slow, and some pain along the road to recovery caused some minor setbacks.

But, with the Cross Country Provincials drawing nearer, he was very motivated to push through and compete with his teammates.

“There was a lot of nerves going into it because I didn’t really know what kind of shape I was in. I haven’t raced in a year so I was really nervous the day of, so I didn’t really know what to expect,” he said. “I was mainly focused on the whole team aspect of it. I just knew I was going to try to do what I could to place high enough to get more points for the team.”

“The guys I’ve been training with, they’re really good. That just motivated me to be with them or in front of them and that was just a good pacer for me,” he said. “Under all the circumstances I was pretty surprised. I was pretty happy with how I did.”

Brendan’s focus on his team’s results over his own is a consistent theme that runs throughout the Cochrane Endurance Project, said Nowicki.

“We’re very proud of them, they train hard, they have a good attitude—Evey single person on the team has a good attitude, we don’t have anybody who pretends they’re an all-star and stands out,” he said, “All our young participants there are pretty selfless people, they’ve got good attitudes, and good times too.”

Nowicki said that he has enjoyed being around the competitors of all ages on the team, and is continually inspired by the competitive spirit and accomplishments of the runners.

“I feel very proud and inspired by the rest of the team. The assistant coaches, the ladies getting their silver ... The younger folks there, wow. My voice was hoarse at the end, of course, from cheering them on, but also out of the excitement of seeing them do so well.” he said. “They went out and ran their hearts out and had great races. I feel so inspired and proud of them.”

Both Nowicki and Brendan said that their injuries are feeling good, and they are recovering nicely.

Now that the season has ended, the team is taking two weeks off before resuming their training near the beginning of December.