After spending all off-season thinking about what could have been, the Cochrane Generals have returned to the ice in preparation for their upcoming Heritage Junior Hockey League (HJHL) home and season opener when they tangle with the defending provin
Sep 21, 2019 3:44 PM By: Troy Durrell 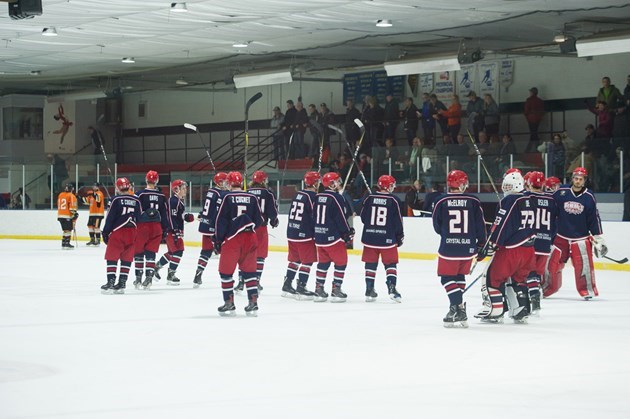 The Cochrane Generals open their season tonight against the Airdrie Thunder at the Cochrane Arena. Puck drop will be at 7:30. File Photo

After spending all off-season thinking about what could have been, the Cochrane Generals have returned to the ice in preparation for their upcoming Heritage Junior Hockey League (HJHL) home and season opener when they tangle with the defending provincial champion Airdrie Thunder tonight with puck drop going at 7:30 p.m at the Cochrane Arena.

"As a team we are feeling confident after the few exibition games we had to start the season," said team captain Brandon Aab. "Although the team consists of a large amount of returning players, the new ones coming in are gaining chemistry after each session. We are going to be a strong, fast, hard hitting hockey team which will be a huge advantage throughout the season. Our veteran presence will help the younger guys with adapting to the style of play in order to achieve success."

The Generals had four preseason games, where they fell 6-2 to Airdrie on Sept. 6, defeated the High River Flyers 6-3 and 5-1 on Sept. 13 and 14, as well as took down the Thunder with a 4-2 victory in their final preseason contest.

"We've always had a rivalry with Airdrie," Aab said of their North Division nemesis. "We expect nothing less than a hard hitting, fast paced, tight hockey game and hopefully the home crowd will help us win."

Last season, the Generals were right near the top of the Souther Division standings. While they finished third with a 27-9-2 record, they were only two points out of second and four points out of first place due to their stingy defence that allowed only 117 goals throughout the season, and average of three per game while scoring 186 goals, good for just under five per contest. They took down High River 11-2 and 3-1 in their opening best-of-three series before defeating the second-placed Okotoks Bisons in five games in a classic series where the Gens outscored the opposition 16-14, in which every game but one was decided by one goal. In the league semi finals, they put up a spirited fight against the division leading Coaldale Copperheads but ultimately fell in five games.

This year's version of the Generals will return a veteran-laden roster, with only one person - Braden Bain moving onto graduation. While the team will miss his 25 goals and 56 points, Aab feels like the team should have the depth to score timely goals.

"We have a lot of scoring potential coming in from the new guys on the team as well as the guys from last year," Aab said. "Now it's just a matter of guys stepping ip and taking a bigger role as a player or as a line."

The Generals won't have much time to rest as they will be back on the ice tomorrow in order to face the Coaldale Copperheads at Cochrane Arena. Puck drop will take place at 6:45 p.m.