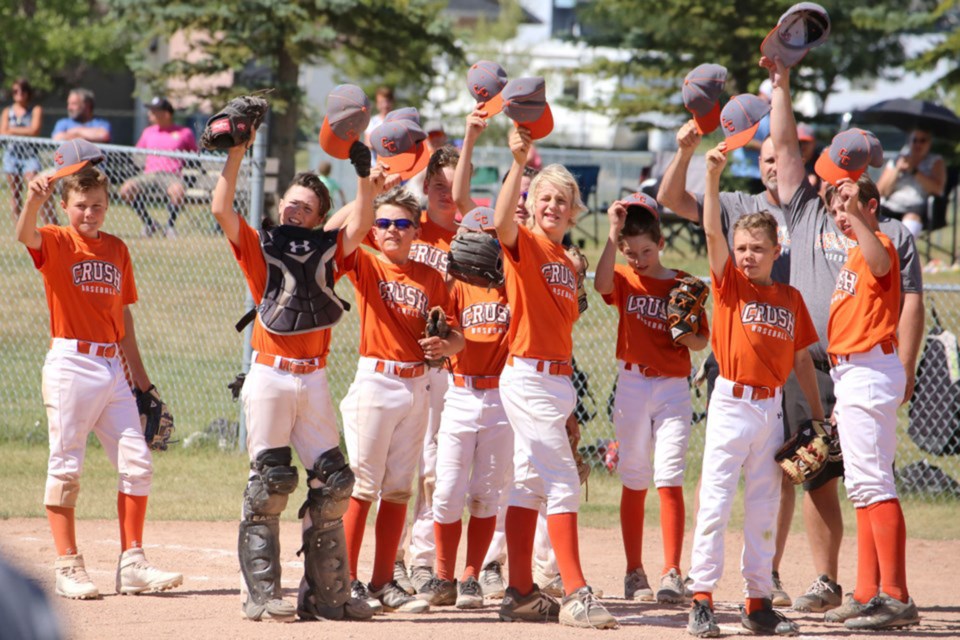 The Cochrane Crush lift their hats to the competition after winning their cohort's championship game on Saturday (Aug. 15). (Tyler Klinkhammer/The Cochrane Eagle)

COCHRANE— Cochrane Minor Baseball opened up its registration on Friday (Jan. 15) for the upcoming 2021 season.

Registration will remain open until Feb. 28, and the tryouts will begin in mid-to late-February, depending on the age group.

There will be a competitive stream open to those interested for both the U13 and U15 teams.

Little League evaluations take place at the end of March.

Registration opened up at 8 a.m. on Friday and by the afternoon roughly 120 people had registered to play ball.

“It’s probably not the numbers that we would get normally, but it’s pretty ... Close so we’re surprised with the high number already,” said Corey O’How, president of Cochrane Minor Baseball.

O’How said the success of last season and the league’s ability to operate without any incidents of COVID-19 spread might be a contributing factor in the day-one success of registration.

“I think after everything that happened last March and baseball was the first sport to open up and start to play, and see how things would go— And I think we had nine teams that played with no issues, no cases that sort of thing— I think that showed us that we can do things safely.”

He said the structure of this season is still up in the air and will likely be reactionary where guidelines for play will be set as Alberta Health Services releases recommendations for health and safety, similar to last year’s season.

“One of the benefits of opening registration in the middle of January is that it gives some time to get people registered, some time to figure out how many people want to play and then some time to figure out what’s going to happen,” he said. “We’re kind of flexible—We’re going to plan for a normal season, where kids can play each other, but if we’re not there yet at the beginning of May when the season starts then we’ll obviously follow AHS guidelines.”

Last year, following a successful registration period, the season was cancelled due to the COVID-19 lockdowns in March, with a last-minute relaunch in the spring for a late summer season.

If you have any questions about the upcoming season, send an email to admin@cochraneminorball.ca/.

For more information, or to register for the upcoming season, visit cochraneminorball.ca/.