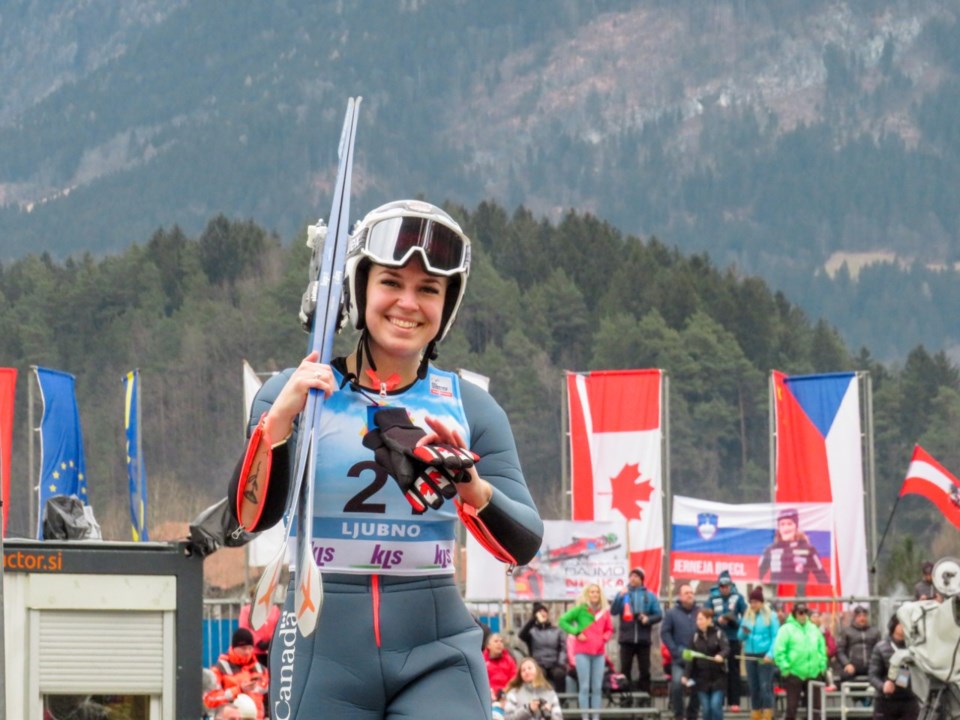 Natalie Eilers waved to the camera during a competition in Ljubno, Slovenia, earlier this year. Eilers only recently returned to jumping after an LCL reconstruction surgery that occurred last August. Submitted Photo

COCHRANE – On Wednesday (June 24), Royal Bank of Canada announced an investment of $230,000 to support the next generation of Olympic hopefuls involved in sports that take part in its nation-wide talent identification and funding program, RBC Training Ground.

“Due to the global pandemic, we’ve had to pause on identifying new athletes with Olympic potential through RBC Training Ground events, but what’s not on pause is our investment in Canada’s Olympic future,” said Mary DePaoli, Executive Vice-President and Chief Marketing Officer, RBC. “This is most certainly a unique year, but we know it’s more important than ever to help ensure RBC Future Olympians and Next Generation athletes under the care of our NSO partners continue to receive the funding support that will further their athletic development.”

One of the qualifiers for RBC’s grant is local Cochranite, Canadian National Team member, Natalie Eilers. Eilers has been on the national team for several years, representing Canada on the global stage and at competitions around the world.

For Eilers, a 21-year-old representing Canada at international competitions, while simultaneously attends the University of Calgary’s business program, the announcement of the RBC Training Ground grant was a huge relief.

“I was very excited because the suits are very expensive. They just changed the rules, like they usually do in the summer when the season starts, so we all need new suits now. They’re not the cheapest things in the world, so having some support is amazing,” she said.

In 2011, the International Olympic Committee announced that women’s ski jumping would be added to the Olympics for the first time at the Sochi Winter Olympics in 2014.

Eilers’ was identified by a scouting program looking for female athletes nine to 11 years of age to join the burgeoning sport, and was invited to a talent identification camp run at Canada Olympic Park.

She performed so well she was inducted into Altius Nordic Ski Club’s provincial team, Alberta Ski Jumping and Nordic Combined, and began to train with them.

Before ever trying out ski jumping, Eilers was a figure skater, but had been recreationally skiing since she was three, she said. She quickly took to the sport.

In her second year, Eilers was on the full-sized hill in no time, a progression her coach says is the fastest he has seen to this day.

Updates to the rules and regulations are not uncommon, but this year the updates stipulate that women’s suits are to be more fitting from the waist down to reduce surface area and to create consistency from athlete to athlete, said Todd Stretch, Chairman of Ski Jumping Canada.

“In the world of ski jumping the ski jumping suit has gone through many modifications and strict guidelines in materials and tailoring restrictions,” Stretch said. “At FIS sanctioned events suit measurements are conducted prior to each jump … some of the top jumpers in other nations travel with as many as 10 jumpsuits, each designed for temperature and wind conditions at the time of competition.”

Her team has a ski sponsor and a glove sponsor, she explained, but the athletes and their families provide most of their equipment.

“That was really exciting because we don’t have much for funding. I know some of us have government subsidies, but other than that it’s pretty much on us or our parents.”

This year the points she and her team accumulate at competitions count towards their Olympic qualifications, so this season will be especially important.

“Our schedule is quite a bit busier than it has been in the past because we need to hit all of those world cups to try to get the points and get a spot,” she said. “We did this a few years ago with the last Olympics we were quite busy then, but I think now because of the COVID crisis it’s all pushed back, so we’ll be quite busy in the fall now.”

She and some of her teammates are in school. Eilers typically schedules her courses around the competition season, in the spring, summer and fall, but COVID complicated that this year by delaying their schedule.

Although she’s expecting a busier season, she won’t let it bother her.