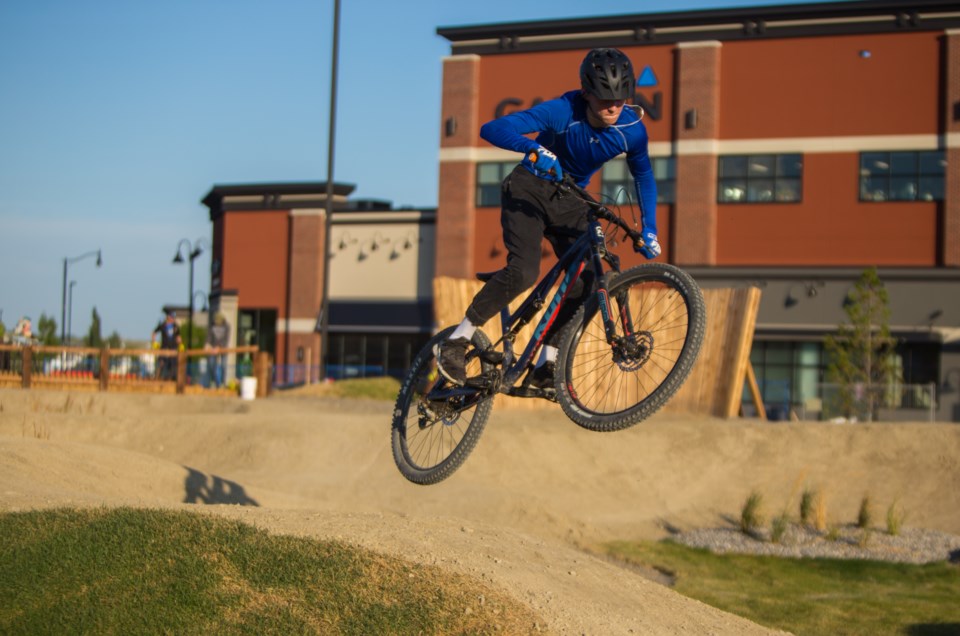 COCHRANE— Cochrane’s newest cycling attraction, a flow park in the parking lot of the Bow Street Commons at The Quarry, is now open to the public.

The idea for the park was conceived by the non-profit society Bike Cochrane.

Construction of the park began in the fall of 2019, and after a few setbacks, mostly due to weather and COVID-19 the park is now fully rideable.

Graham Puie, one of the board members of Bike Cochrane and the proprietor of Bike Bros in Cochrane, said they are excited to see the park open up.

“Weather and all sorts of other factors playing a role, it was drawn out, but we’re happy with the outcome,” said Puie of the construction efforts.

He added, the park should serve as a destination for all riders, Cochranite or not.

“It will give locals and outsiders, as far as a destination goes, a place to work on some skills, and basically to have fun, especially for families and things like that because it’s such a convenient, central spot.”

The process of construction was a difficult one, Puie said and took a team of people to pull off.

“It was a lot of hard work,” he said. “A park like that is a pretty expensive undertaking, so a lot of people chasing grants, looking for sponsors and fundraising.”

Puie noted that several “key” board members were on the ground doing a lot of the physical work on the park, which contributed to the quality of the outcome.

Puie himself was able to visit the park himself for a brief ride, and said that he was “really impressed by the outcome.”

The board not only wanted to develop a functional, fun to ride park but a visually appealing spot as well, he said.

“It was actually largely about that it’s a really interesting place to look at, which was one of the big goals going into this,” he said. “Being as central… as it is, one of our big concerns was trying to put the best foot forward and obviously provide a riding area, but also do it in a way that is aesthetically pleasing, almost like an art installation.”

Puie credited the membership of Bike Cochrane for helping get the ball rolling on the project.

The membership, he said, allows the board to approach developers with community projects.

“Largely, what membership is doing is helping us to say that we represent a given number of people, so the larger that number is, the [better] chance we have to go to a developer, like Springwood and say ‘this is what we’re trying to do for the community and we represent this many people,’” he said. “Those people that have bought memberships and sponsored the club, that really does pay back in being able to get things done.”

To get a membership to Bike Cochrane, visit either Big Hill Cycle or Bike Bros in Cochrane, or go to BikeCochrane.com/.

“Hopefully people see this as a sign of what Bike Cochrane is able to achieve,” Puie said.