"I was in my seat and my drinks were brought to me and as that happened, the goal happened," Dowling's mom said with a laugh. "Everyone around me was clapping and cheering and I didn't know what was happening ... I might as well be truthful about it. I could have said that I saw it, but why? It just added to the evening."
Nov 14, 2019 10:46 AM By: Troy Durrell 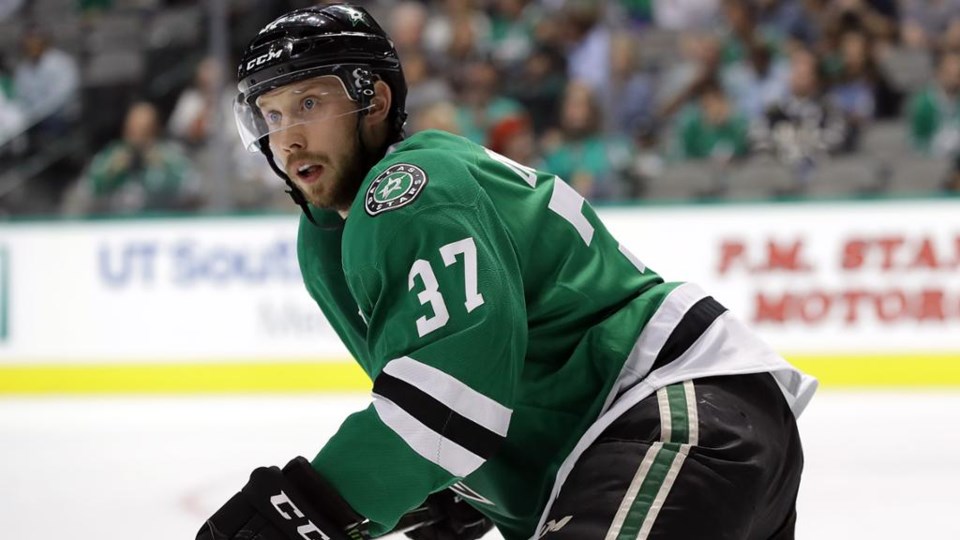 Photo credits to the NHL

29-year-old Cochranite Justin Dowling achieved what every hockey-playing child grew up dreaming about. He scored his first National Hockey League (NHL) goal. It was a beautiful one at that in front of his family and friends when he and his Dallas Stars teammates took down Dowling's hometown Calgary Flames 3-1 on Nov. 13 at the Scotiabank Saddledome.

Early in the third period, Dowling pulled off a nifty toe-drag move and deposited the puck past Flames goaltender Cam Talbot to give the Stars a 2-0 lead and eventually stood as the game-winning goal. He then scored his second career goal the following evening against the Vancouver Canucks on a similiar move.

Dowling's parents Sherry and Glen said they couldn't be more excited for their son to finally achieve his dream.

"To be honest, it was a super day in my eyes. He's been waiting for this for a long time," Dowling's dad said. He's been trying, trying, trying to get there, he finally made it this year where he's sticking around."

"It was a sweet feeling," his mom exclaimed. "Very sweet, even though I missed it and managed to see it when I saw the replay."

The incident Sherry is referring to was the fact she was dealing with a drink situation and missed her son's first NHL goal, a story the family soon won't forget.

"I was in my seat and my drinks were brought to me and as that happened, the goal happened," Sherry said with a laugh. "Everyone around me was clapping and cheering and I didn't know what was happening ... I might as well be truthful about it. I could have said that I saw it, but why? It just added to the evening."

"She didn't have a clue what was happening," Glen said of his wife's confusion. "We were in the club seats so you can text or talk to the server and they bring you your drinks and that's how she missed it ... she was dealing with a drink with the guy (server) beside her and she was trying to figure out all these drinks for everyone that we were with and Justin went down and scored the goal. It through a loop into the whole situation and is actually quite comical and almost brings the night together ... yes it's awesome he scored his first NHL goal, but just how it all turned out and the after effects of it all makes it that much better. It will be a total memorable night for everyone. There always has to be a story."

Dowling has proven he's been able to score at all levels, registering three 60 plus point campaigns with the WHL's Swift Current Broncos while tallying 295 points in 405 games with the Texas Stars of the American Hockey League. His parent's said he's worked very hard for the opportunity to play and stick with Dallas this season after getting little bits of game action over the past couple of seasons.

"It's been a long journey, I know that. It all stems back to back when he was playing Bantam and was never drafted to any team (in the WHL), he made the AAA Bisons out of Strathmore as a 15-year-old and that was stepping stone," Dowling's father said of his sons road less travelled adventure to the NHL. "He never got drafted to the WHL, never got drafted to the NHL, he really had to fight for everything that he's gotten and kudos to him, he's never given up. He had a lot of options to go play in Europe but that's not where he wanted to go. He wanted to play in the NHL and as a 29-year-old guy, he just kept plugging away trying to make his dream into a reality and he did it."

"It's pretty exciting ... it's exciting for everyone else but as his parents, being with him the whole time and talking to him about certain things, I'm just estatic for him. It's truly a memorable experience."

The whole experience has yet to sink in for the Dowling family. "We were talking about it the other day and it's just so surreal," Dowling's mom said.

"It's hit me, but now that he has his goals under his belt, it just makes the experience that much better. He finally has that weight lifted off his shoulders, he's establishing himself to where he belongs and it just makes things a lot easier."