“It was a lot of emotions. A mix of relief, excitement, nerves, just a flurry of a whole bunch of things. We don’t know what the future is going to bring, but you can just work as hard as you can right now.”
Oct 15, 2020 3:00 PM By: Tyler Klinkhammer 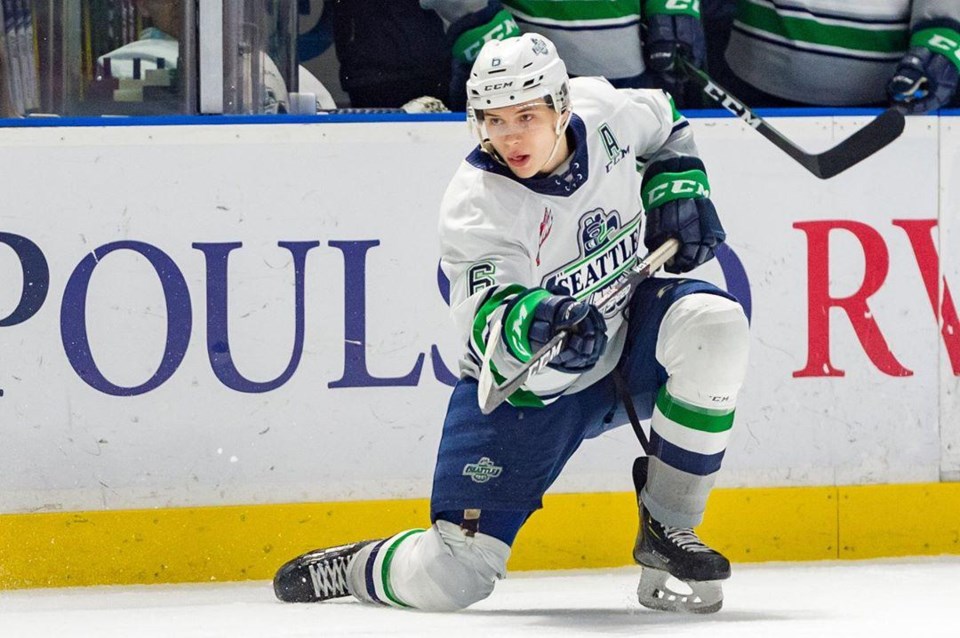 Tyrel Bauer was selected 164th overall in the 2020 NHL Draft by the Winnipeg Jets. Photo Submitted.

COCHRANE—Cochrane’s Tyrel Bauer recently had a dream fulfilled that many young players envision during their hockey careers—He heard his name called during the NHL draft.

Bauer played his first full season in the WHL with the Seattle Thunderbirds in 2018/19 and he picked up three goals and 14 assists in 60 games played with the coastal hockey club last season.

On the first day of the NHL draft, Bauer was with his fellow Thunderbird Matthew Rempe.

On day one of the draft, neither player got the call. On day two Bauer was selected by the Winnipeg Jets, going 164th overall.

“It was one of the longer drafts in recent history. I think it was five or some hours from the start to when I heard my name called,” he said. “Every minute was agonizing, but it was a lot of fun and the feeling was just unforgettable.”

The moment they called his name he said he was hit with a wave of emotions.

“It was a lot of emotions. A mix of relief, excitement, nerves, just a flurry of a whole bunch of things,” he said. “We don’t know what the future is going to bring, but you can just work as hard as you can right now.”

His family, he said, were every bit as excited as he was.

Minor and Junior hockey is a huge time and financial investment, and often families have to sacrifice a great deal to ensure their children can play.

“I can’t even put into words what they’ve done for me to be able to play and give me all the opportunities I have throughout my life. They’re just really, really special people,” he said. “They deserved it every bit as much as I did. That was a special moment to share.”

Following a normal draft in a normal year, the NHL teams would be organizing player development camps to welcome their new recruits to get them ready for the upcoming season, but because the NHL ran so late, this year’s plan is uncertain, Bauer said.

“Right now, we’re not really sure, just like everything else,” he said. “We would have a development camp, and we would head down there and get a feel for the team and they would get to see us again or for the first time for some of them, and that’s kind of your first experience with the team, but that’s been postponed for now.”

Bauer said the team will be in touch when they decide on a path forward.

The Winnipeg Jets had a particularly trying year for their defence after dealing with the loss of Jacob Trouba, Dustin Byfuglien and Tyler Myers in a single offseason.

There is a lot of room to develop on the defensive end with the Jets, but Bauer said he is not looking that far forward quite yet.

“We’re a little bit far away. We still have a lot of work to do and a lot of time to put in in the gym and on the ice before I can get to that level,” he said. “I know that in terms of Winnipeg and their style of play and what they have available positionally, I think it was a really good spot for me to go.

“Not to mention their unbelievable fan base. They’re a really big hockey city and their fans are just incredible."

Bauer said he models his play after the likes of Shea Webber and Joel Edmundson— Big, tough players who play a rough defensive game but are still capable of producing offence in a variety of situations.

“That’s kind of my style of play,” he said. “That’s something I’m also trying to expand into my game.”

For the time being, Bauer will be heading back to Seattle for another season with the Thunderbirds until he gets the call up to the big show.

“Tentatively we’re supposed to start December 4, and we’ll be up there for camp around November 23,” he said.

He noted that he’s looking forward to the season starting up again.

“We’re starting to lose our minds a little bit. I think I speak for a lot of Western League players from around the area here and around the league. That’s what we’re built to do, that’s what we’ve been doing our whole lives. When it gets postponed it kind of throws a wrench into things, but it makes you stronger on the other side if you can get through it,” he said. “A lot of guys a rearing to go and I’m no exception.”