Dillon Dubé is proving he can hang with the big boys as he tallied a goal and an assist while playing on the Flames top line with Sean Monahan and Johnny Gaudreau in a preseason contest against the San Jose Sharks.
0
Sep 27, 2019 11:55 AM By: Troy Durrell 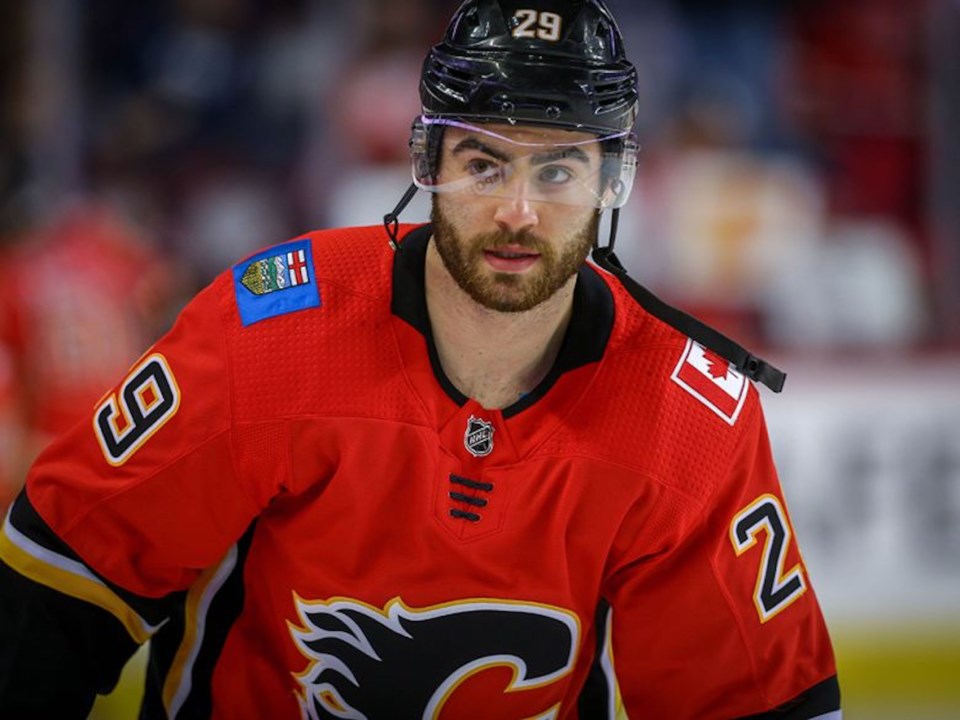 Dillon Dube is looking to play his way into a full time role with the Calgary Flames. He is one of many Cochrane-born hockey stars suiting up for the upcoming hockey season. Submitted Photo
The Calgary Flames are giving Dillon Dubé a chance to crack their opening night roster for a second year in a row. So far, he is taking full advantage of that opportunity.

Dubé tallied the game-winning assist during a 1-0 victory in a rookie showcase game between the Flames and provincial rival Edmonton Oilers on Sept. 7.
Dubé had the chance to try his hand on the Flames top line with Johnny Gaudreau and Sean Monahan when they had their third of eight preseason games against the San Jose Sharks on Sept. 18.

“I’m really excited for the opportunity. They’re obviously top guys in the league,” Dubé gushed after Wednesday’s morning skate in an interview with the Postmedia's Wes Gilbertson. “Just their brains, they’re so smart with the puck. They’ve been playing together for so long for a reason — because they think so far ahead of everybody else. The plays someone doesn’t see coming, they always see it. You can almost just see it build from our end to their end, just because of the things they do and the lanes they find … It’s incredible."

“Obviously, Lindy (Elias Lindholm) has played a lot with them and it won’t be the chemistry they have. But I’m just going to be trying to talk a lot and hopefully fit in with them. It’s a nice opportunity to try to showcase some offensive ability.”

The Cochrane kid didn't disappoint in his audition on the top line as he had an assist on Monahan's first period snipe before adding a goal.

Dubé undressed Sharks goaltender Antoine Bibeau with a nice backhand-to-forehand deke that stood up to be the game winning goal in a 6-4 victory.

“I say ‘building my game each game,’ but a lot of it is building my game for my future,” Dubé said after the victory against the Sharks to Gilbertson. “They have such a great development plan here. They’ve had such good players brought up through their organization, so there’s a lot of trust in the management here and if I play good enough and they think I belong, then I’ll stay here. And if I need some more seasoning in the American League, then so be it. It’s just coming out here and trying to play my best every night and give them what I have.”

“All you hear is about how good the last exhibition was, but it’s a new page. It’s time to turn that. It doesn’t change anything that’s happening in this camp,” Dubé continued, who logged 25 appearances with the Flames last winter and suited up for 37 more on behalf of the American Hockey League’s Stockton Heat. “It’s just going out there and trying to find my way and build each game. It’s nice to be here and feel a little bit more comfortable, but there’s still a lot in the back of your head that this is a huge tryout."

“I wouldn’t be here if I didn’t have that mindset. I would be sent down to Stockton real quick because there are a lot of guys hungry to take jobs.”
With Matthew Tkachuk still un-signed, Dubé will get at least one more chance to strut his stuff before the season begins on Oct. 3 against the Colorado Avalanche.