Four long-serving Generals moving on due to graduation 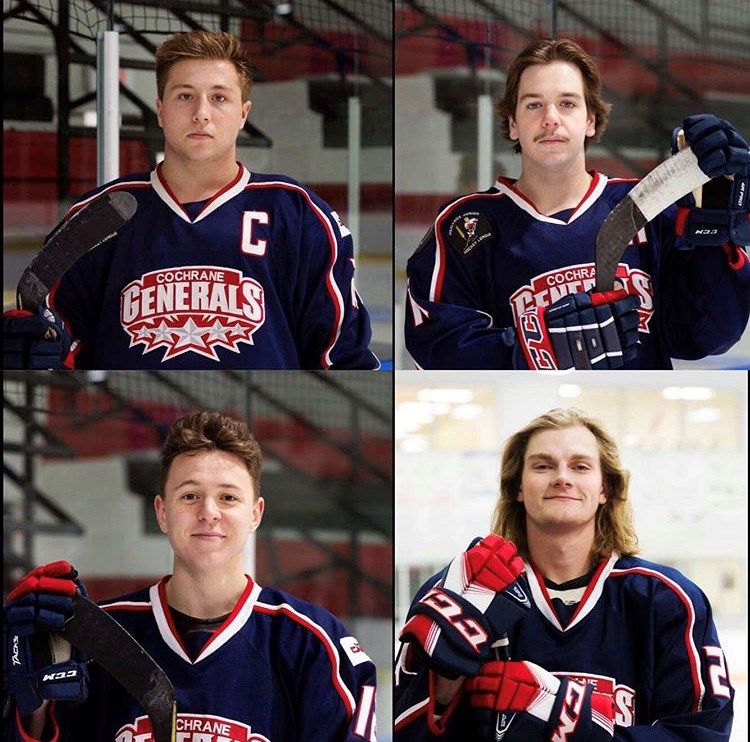 The Cochrane Generals are still coming to terms with the fact that their season came to an end due to COVID-19. They had just tied up their Heritage Junior Hockey League (HJHL) third-round series with the Okotoks Bisons when they heard the news that their season was over, effective immediately per Hockey Canada.

“Without question, this an unprecedented period of difficulty for the sports world. The health and safety of all participants in sport, including players, coaches, staff, officials, fans, family, volunteers and the general public, is of the utmost importance to Hockey Canada," Hockey Canada chief executive officer Tom Renney and chief operating officer Scott Smith said.

"After much consultation with the Hockey Canada membership, our chief medical officer and public health officials, the Hockey Canada Board of Directors has made the decision to cancel all Hockey Canada-sanctioned activities, including our national championships, until further notice, effective Friday, March 13, 2020."

"We recognize the tremendous effort that has been put forth all year by individuals across the country as they participate in Canada’s game. Although it is difficult to process the hockey season-ending abruptly, we feel this is the best course of action in order to do our part in keeping our country safe.”

The news was devastating to the Generals but effected four players in particular. Team captain Brandon Aab, Chris Sambrook, Jordan Fisher and Taylor Girard all had their junior careers end when the news came crashing down that they could no longer continue their drive for a championship.

"It's been set into my mind for about a week now that the season ended due to the circumstances in the world," said Aab on how the season ended. "It's back to reality with work instead of living the dream with my teammates. We had something special this season. It was a great year and we weren't done yet. Over the past four years each team had been different, with highs and lows. This year's team was the closest a team could have become without being an actual family."

"I personally feel like we could have gone all the way. It wouldn't have been easy but we were up for the task."

While Aab had seemingly already come to terms with the way their year ended, the same couldn't be said for Sambrook and Girard.

"It sucks, definitely not the way I wanted (my junior career) to end," Girard said. "We were making a good push in the north final and just to have it end as a tie is not the best way to go out."

"Yeah, it hasn't set in yet for me," Sambrook said. "With everything going on with the virus I'm a bit distracted; however, once it's all over I think it'll hit a bit harder than we didn't get to finish the season off. I felt like we could have won a championship. We were playing some really good, high paced hockey and we were starting to really click as a team. Just sucks that it ended the way it did."

The foursome could go down as one of the best group of graduating players the team has ever produced. In total they combined to play 480 regular season games in Generals colours, amassing 347 points between the group. They also suited up in 144 combined playoff games over the past four seasons where the four players put up 82 points.

"It was a very enjoyable time I spent with the Generals," Sambrook said. "I got to age out and spend four years with my three good friends while also getting the opportunity to meet new people and make many other friendships."

"It was a really good experience for me," said Girard of his time with Cochrane. "I moved from Camrose to Cochrane after high school, so being here for four years, I got to meet a lot of new friends and play against teams I'd never played against. I felt welcomed instantly and wouldn't have wanted to change any of the guys I played with. All around, it was a great experience and it's something I will always remember."

Aab, who served as the team's captain for two years, said he's grateful for his time with the Generals and that it was an honour to be the captain of the team.

"It was great to wear the 'C' but it was more about the crest on the jersey and being part of the team for so many years," he said.

"I'm very grateful for the time I spent with the Generals organization. I loved every game, practice and team activity with all the players and coaching staff. It was filled with so many great memories that I'll carry with me for the rest of my life. It helped shape me into the man I am today. The four years with my fellow graduating players was such a fun ride ... we became super close over the four years and will continue to grow our friendship over our lifetime."