"One of our goals for the game was to come out and play a solid first period and set the tone for the game which we did. We slowed down a bit in the second and third, but we came out with the win and at the end of the day we got the two points which we needed."
0
Nov 28, 2019 3:05 PM By: Troy Durrell 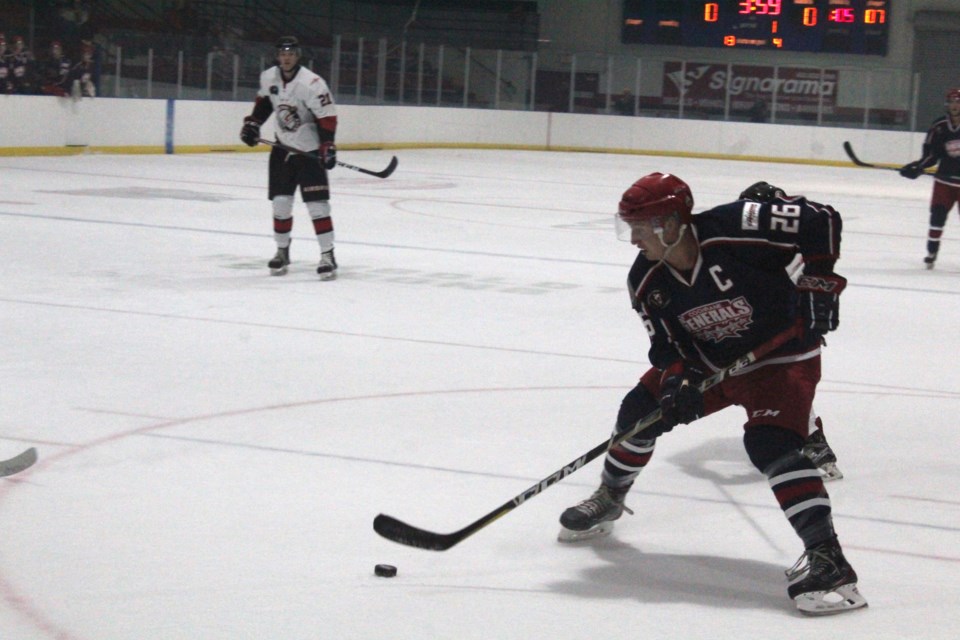 The Cochrane Generals are on quite the roll.

After taking down the Red Deer Vipers and Strathmore Wheatland Kings on Nov. 23 and 24, the team has now won four straight and seven of their last eight games to stretch their record to 14-5-1 on the season, good for 29 points.

Red Deer went up 2-0 on a pair of goals in the first and second period but Cochrane found three of the next four goals with Brandon Aab and Zachary Stewart tying the game up at two but Red Deer regained the lead 59 seconds after. Jordan Fisher potted his first of the game to tie it at 3-3 heading into the third period.

In the final frame, Patrick Forde scored twice with Jordan Fisher also scoring his second of the evening while Red Deer was only able to respond once, giving the Generals a 6-4 victory. Erik Garber stood tall in net for the visitors making 28 saves on 32 shots for his eighth win in 14 games.

In the game, the following evening in Strathmore, the Generals continued their goal scoring spree by potting a pair of first period goals off the sticks of Caden Chudleigh as well as a power play goal from defenceman Ryan Davis. The second period was scoreless, but the third period brought plenty of fireworks. Strathmore scored two quick goals just under a minute apart to tie the game at two and it would stay that way until the final moments of the game with the Wheatland Kings taking a penalty and Ryan Davis scoring his second goal of the game with five seconds remaining on a shot from the point, giving his team the 3-2 victory.

"I think we played a good couple of games as a team," said goaltender Erik Garber who was once again solid in the second of a back-to-back making 28 saves.

"One of our goals for the game was to come out and play a solid first period and set the tone for the game which we did. We slowed down a bit in the second and third, but we came out with the win and at the end of the day we got the two points which we needed."

Garber and back up Jordan Lott has been virtually unbeatable so far this season, combining for only 45 goals against in 20 games this season, an average of just over two per game.

"Yeah I think I’ve been performing well so far this season. I am feeling confident every time I’m in net and I think the guys have that same confidence in me," Garber said of his play.

"I also have to credit the team with my play this year as they’ve played really well in front of me. Right now we are second place I believe in goals against in the league and that doesn’t come from just one guy it’s a team effort all around."

The goaltending is part of the reason why the Generals have gone 12-2-1 since losing three of their first four games of the season.

"I think everyone is starting to buy into the program we have here. We are working hard day in and day out in practices and we are starting to realize what it takes to win games," Garber said.

"I think those three games at the beginning of the year were a learning experience for us as we were playing some tough games to start, and since then we’ve been playing some good hockey and have had some big wins since then."

While the team is rolling now, Garber said there was certainly an adjustment period to their new head coach in Kurtis Jones.

"Yeah I’d definitely say there was a bit of a period where we were figuring things out as a team. Every team has that for the most part when starting a new season," said the starting goaltender.

"With new players coming in and new coaches sometimes it takes a little time to figure things out as a group, but I’d say we learned pretty quick after those first few games and now we have things figured out between players and the coaching staff and it does show. We are one of the top teams in the league and are a team to beat."

The Generals will now have a pair of games against the High River Flyers and Sylvan Lake Wranglers. In the previous meeting with Sylvan Lake, a 8-3 Generals victory, it was a chippy game something Garber said his team can't engage in this go around.

"We can’t take either team lightly," he said.

"We've got to come out hard and set the tone of both games. With Sylvan we just gotta stick to our game and not play their game. They play a dirty game and they’ll try to drag us into playing their game. We just gotta stay out of all that and focus on putting the puck in the back of the net."