"We need every player to commit to our team goals. We are a very offensively talented team so I don't think we will need to worry about scoring because I believe that will come. But I think we will have to focus more defensively against teams that can score like Okotoks, Airdrie and Medicine Hat."
Jan 30, 2020 3:30 PM By: Troy Durrell 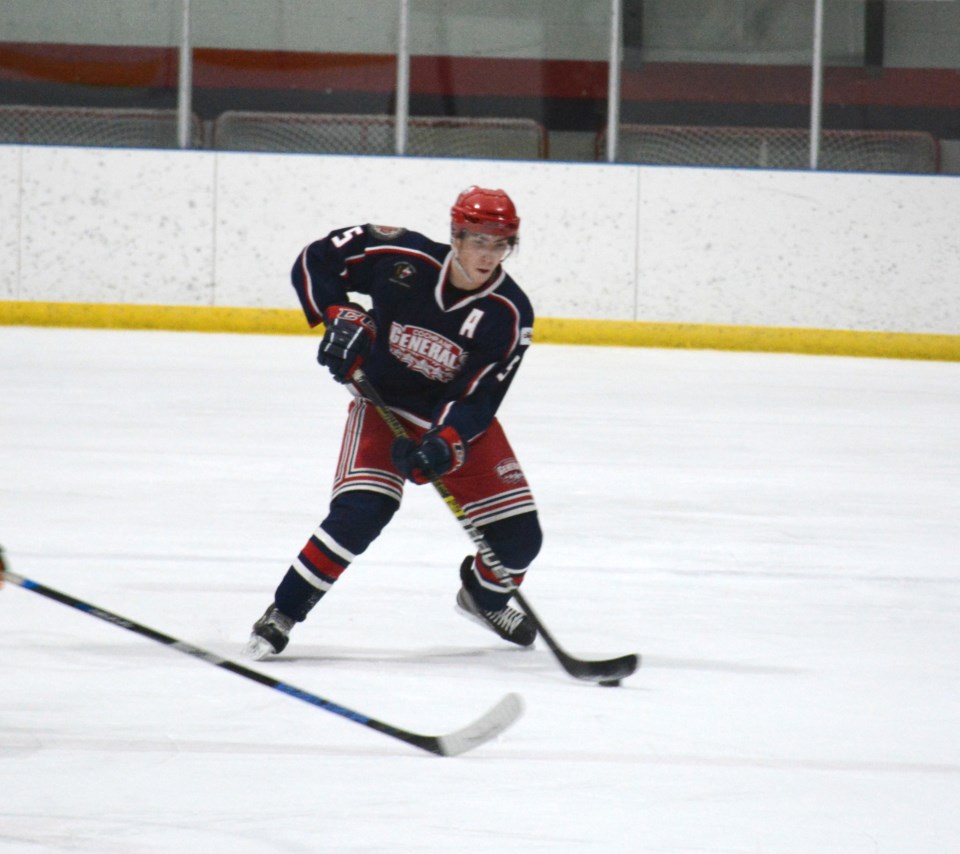 It seems as if the Cochrane Generals just needed the Christmas break. Since the annual Xmas vacation, the Generals got back to their Heritage Junior Hockey League (HJHL) schedule on Jan. 4 and haven't lost since, reeling off seven wins during that stretch including a pair of games against the Lomond Lakers on Jan. 24 and 25.

Since the second half of the season began, the Generals had 7-0, 6-3, 7-5, 7-6 and 7-1 victories over the Ponoka Stampeders, Mountainview Colts, Coaldale Copperheads, High River Flyers and Strathmore Wheatland Kings. They followed that up with an 8-2 win in Claresholm and 8-0 win back home over the Lomond Lakers.

In the first matchup, the Generals were up 2-1 after the first with goals coming from leading scorer Dean Olenyk and Zach Cugnet before blowing the game open in the second period. Patrick Forde and Scott Shugg made it 4-1, Lomond cut the lead in half making it 4-2 but Shugg scored his second goal of the game 50 seconds later putting the Generals ahead 5-2. Olenyk tallied his second goal in the third while Shugg netted his hat trick goal on the power play. Patrick Forde rounded out the scoring with his second goal of the game.

Erik Garber turned aside 20 of the 22 shots he faced, while he witnessed his team pepper the Lakers netminder with 70 shots.

In the second game, the Generals continued the onslaught, popping three goals in the first period off the sticks of Brandon Aab who scored twice which sandwiched a goal from Dean Olenyk. The second frame was a little less quiet with Patrick Forde scoring the only goal, pushing the Generals lead to 4-0. Olenyk scored his second and third goal in the final period with Taylor Girard and Scott Shugg also joined in on the fun and gave the Generals an 8-0 win. Erik Garber stopped 20 shots for his third shut out of the season.

Olenyk said the team has made minor tweaks to their game since the Christmas break that has led to their success that included an important four points against Lomond.

"Well, we haven't changed much other than our defensive zone coverage," he said. "I think most of our success is coming because we all want momentum going into playoffs so we know how important every game is and we are treating them that way."

"We played well against Lomond. I think we had all players buy into our game plan which gave us great success both offensively and defensively."

"I was pretty happy (with the hat trick). It was nice to capitalize on my opportunities. I have to give my linemates, Patrick Forde and Zach Stewart most of the credit with some great passes, (Patrick) Forde and I have some great chemistry lately and (Zach) Stewart came on our line this weekend and definitely helped our success."

With only four games remaining in the regular season, Olenyk said it's important to have the team feeling confident heading into the final stretch in order to lock down the highest possible seed in a very tight South Division.

"Yeah, it's definitely important to have everyone chipping in," Olenyk said. "We have four lines that can score which will make us very dynamic in playoffs and hard to defend."

"We need every player to commit to our team goals. We are a very offensively talented team so I don't think we will need to worry about scoring because I believe that will come. But I think we will have to focus more defensively against teams that can score like Okotoks, Airdrie and Medicine Hat."

The Generals will travel to Okotoks on Feb. 2 to take on the first-place Bisons before finishing the season off with three games in three nights against Airdrie and Medicine Hat.