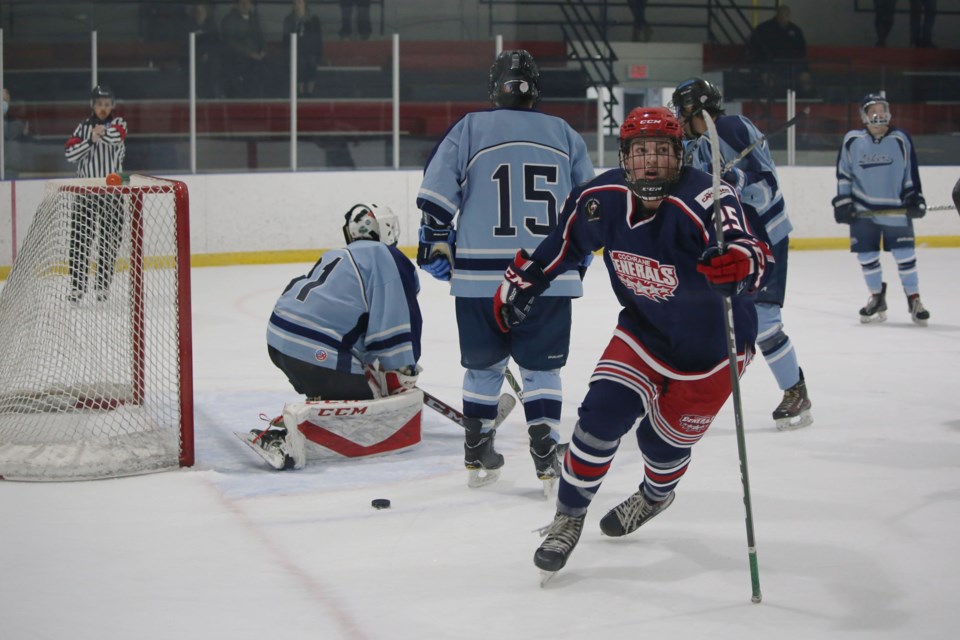 Cade Jackson glides away from the defeated Lakers goaltender after scoring the Generals' first home-ice goal on Nov. 1 at the Cochrane Arena. (Tyler Klinkhammer/The Cochrane Eagle)

Usually, the Gens would run raffles at their games to help raise money for the team, but this year, due to COVID-19, they are unable to do so.

The club has pivoted and given people an alternative way to support the club, and enter to win huge cash prizes.

The winning ticket holder will be awarded between the minimum of $2,000 and a maximum of $5,000, or 50 per cent of ticket sales, whichever is greater.

Tickets will remain on sale until Dec. 14, and the draw will be conducted on Dec. 20, two days after provincial restrictions are set to be removed, during the second intermission of the Gens game against the Strathmore Wheatland Kings.

Many teams in the Heritage Junior Hockey League are largely funded by their gate sales, but with the COVID-19-related limits on spectator numbers, the Gens are looking at innovative new ways to raise those funds.

The recent restrictions that have paused games in the province have only put added strain on the club.

“We are a gate driven league, we have to rely on fundraisers, sponsorships and all of that to stay afloat. We’re just like every other Junior team in, probably, Alberta,” said assistant general manager of the Generals, Paddy Maclure. “We can’t sell any 50-50 tickets so this is the alternative that a lot of teams are going to. We’re not alone in trying to make some money for the team, if not for this year then absolutely for next year as well.”

Maclure said he is hopeful that the league will be able to start once the current restrictions are removed, but is skeptical the team will return to the ice before Christmas break.

“Nothing has been decided yet, but my guess would be that there will be a restart come, probably in January. We already have the schedules made up until February, March, so we’ll keep on going if we do get the OK to play” he said. “I hope we do, and I hope for the player's sake we do too.”

Visit cochranegenerals.com/ to purchase your 50-50 tickets now and support your Cochrane Generals.