Generals prepare for playoff match up with Medicine Hat 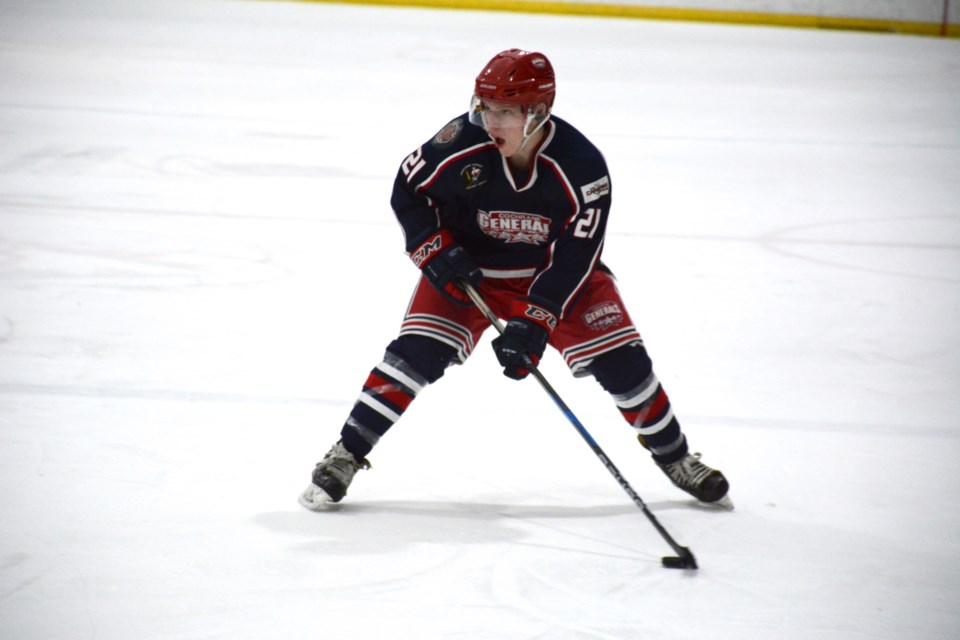 Patrick Forde (pictured) and the Cochrane Generals will begin their playoff push on Feb. 22 against Medicine Hat. Photo by Troy Durrell

The Cochrane Generals are geared up and ready for their shot in the Heritage Junior Hockey League (HJHL) playoffs.

After the Medicine Hat Cubs took down the Strathmore Wheatland Kings three games to one in their best-of-five first-round matchup, it sets up a best-of-seven second-round series with the Generals starting with Game 1 on Feb. 22 at the Cochrane Arena.

Cochrane has played well against the Cubs this season, going 3-0-1, taking 6-0, 2-1 and 3-2 victories away from Medicine Hat while the opposition's only win came on Dec. 22 in a 4-3 overtime victory. The two extra Generals victories, both coming at the end of the regular season, turned out to be the difference in who finished where in the final standings. Cochrane finished the regular season with a 27-9-2 record, good for second in the Southern Division with 56 points with Medicine Hat finishing just behind them with a 25-11-2 record.

There isn't much separating the two teams outside of their record either. Cochrane scored 163 goals while only giving up 95, a plus 68 goal differential while Medicine Hat scored 166 goals but gave up 108 in the process, for a plus 58 goal differential.

In other words, this should be a close series, as it has been between the two teams all season long.

"We can expect the same things we saw from them in the regular season," said Gen's goaltender Erik Garber on the team's upcoming opponent. "They're a hard-working team and they're not afraid to get in the dirty areas. We just have to play our game and not take them lightly even though we beat them twice in the last weekend of the regular season."

"We've had a lot of close games with them even though we've won three out of four, but we've just got to play a full 60-minute game. In games that we've won, we've played very well throughout the whole game. Medicine Hat is a team that won't give up so giving our full effort will be huge for us coming into the series."

The Generals come into playoffs having lost only once since the transition into 2020, winning 10 of the 11 games they played in that span. Garber believes it should give the team confidence heading into the postseason.

"I think as a group we are feeling really confident. Our goal this season was to get a bye for playoffs which we accomplished, was huge for us. We've been playing well lately too so I feel like we can continue our play throughout playoffs," Garber said.

"I think we're really starting to click and I believe we can continue that into playoffs. It's going to give us a lot of confidence and give us the belief that we can win a championship."

Finishing second in the division gave the Generals a bit of a leg up, allowing them to watch the first round of games while also healing some bumps and bruises that come from a long season. Garber feels that home-ice advantage and having a veteran-laden lineup that has been through playoffs before should give the hometown team a boost.

"Home ice is definitely an advantage in the playoffs. I wouldn't say it's easier, but I think anyone can agree you're more comfortable at home rather than playing on the road. It doesn't change the game that much as we still have to be playing our best hockey night in, and night out, but it does give us a little bit of a boost which could go a long way," he said.

"Having a lot of guys with experience is great for the younger guys. We can help each other out and it can be huge for us. But I think our rookies are very good and have learned a lot this season ... they know what to expect as we've had some big games this year where guys have shown up and played great."