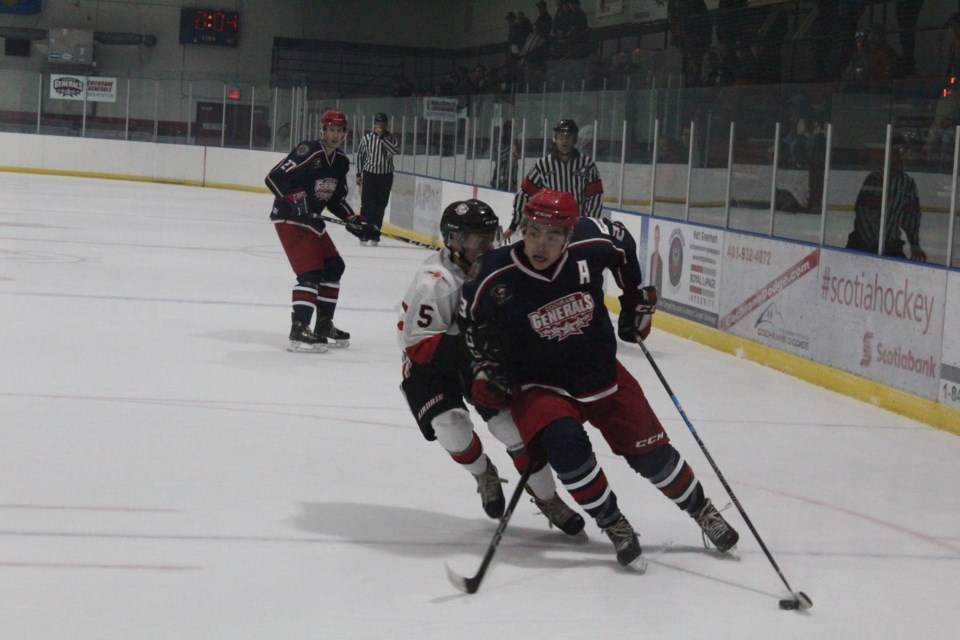 After what seemed like an long off-season, the boys in blue and red hit the ice for their first two meaningful Heritage Junior Hockey League (HJHL) games on Sept. 21 and 22 in a pair of home games.

In the team's curtain-raiser, the Generals took the boot to the defending Junior B Provincial Champion Airdrie Thunder, and took home a 5-0 victory.
After a scoreless first period, the Generals held a favourable advantage in shots on goal with 16 compared to the Thunder's six. Rookie forward Patrick Forde opened the scoring with his first career junior goal before Jordan Fisher, Caden Chudleigh, Takuro Okada and team captain Brandon Aab rounded out the scoring with third-year goaltender Erik Garber turning away all 29 shots he faced.

In the game the following evening against the Coaldale Copperheads, River Ross scored five minutes into the game but it was quickly answered by a Coaldale goal four minutes later.

Brandon Aab scored his second goal in as many nights off a beautiful back door feed from Patrick Forde to make it 2-1 but once again Coaldale was quick to bite back and knotted it up at two in just over a minute.

The Copperheads found the game winning goal at 12:57 of the third period after a pretty deke was made on Generals goaltender Erik Garber to give the Copperheads a 3-2 victory.

Cochrane once again found themselves ahead quite handily on the shot clock, registering 42 shots compared to Coaldale's 28.

"I saw a lot of positives throughout the weekend," said goaltender Erik Garber. "I think in both games the team played very well. I think we didn’t get the right bounces against Coaldale like we did against Airdrie, as well as a few unlucky ones. But we were fast, physical and tough to play against in each of the games. I think we have a really good group of guys this year and I look forward to what we will bring to the table for the rest of the season."

"Unfortunately, (bad bounces) are a part of hockey, things do happen that are sometimes out of your control. I believe if we just play a full 60 minutes of solid hockey every game and keep momentum in our favour throughout the game then that will help prevent that as much as possible."

Garber said playing the opening two games of the season against rivals such as Airdrie and Coaldale can really help the Generals build momentum for the remainder of the season.

"Oh yeah it definitely does (help build momentum). It gives the guys who are new to the league a taste of what is expected vs rival teams like Coaldale and Airdrie," said Garber who has stopped 54 of the 57 shots he's faced so far this season. "It also gets us ready as a team for this weekend as we play Red Deer and Mountainview who are strong teams. It will be another tough weekend and we have to be prepared for it."

He also said he liked his game in goal, where he has a goals-against-average (GAA) of 1.53 through two games to go along with a save percentage of .947.
"I think I played pretty well on the weekend," he said. "Obviously getting the shutout against Airdrie I have nothing to complain about there. (Against)Coaldale, I still felt like I played a good game even though we ended up losing. I felt calm and confident in the net in both games so I’m happy with my performance on the weekend, but it would have been better if we had got the second win. The team also played very well in front of me so I gotta give them credit as well for playing solid defense."

The Generals will have another pair of early season tests as they'll host the Red Deer Vipers on Sept. 26 and will travel to Didsbury the following evening to play the Mountainview Colts.

"We will be expecting nothing less than what we saw from Airdrie and Coaldale last weekend. Red Deer and Mountainview are always in the running for being the top team in the North Division each year," Garber said. "They each play a tough and physical game but also have lots of skill. It’s gonna be a battle until the final buzzer."