"When people come to league-wide events and see players with the Generals red helmet and pants making plays and standing out, they know exactly who we play for. We've built our program with fast and hard-working hockey players and I think that shows."
Jan 10, 2020 3:15 PM By: Troy Durrell 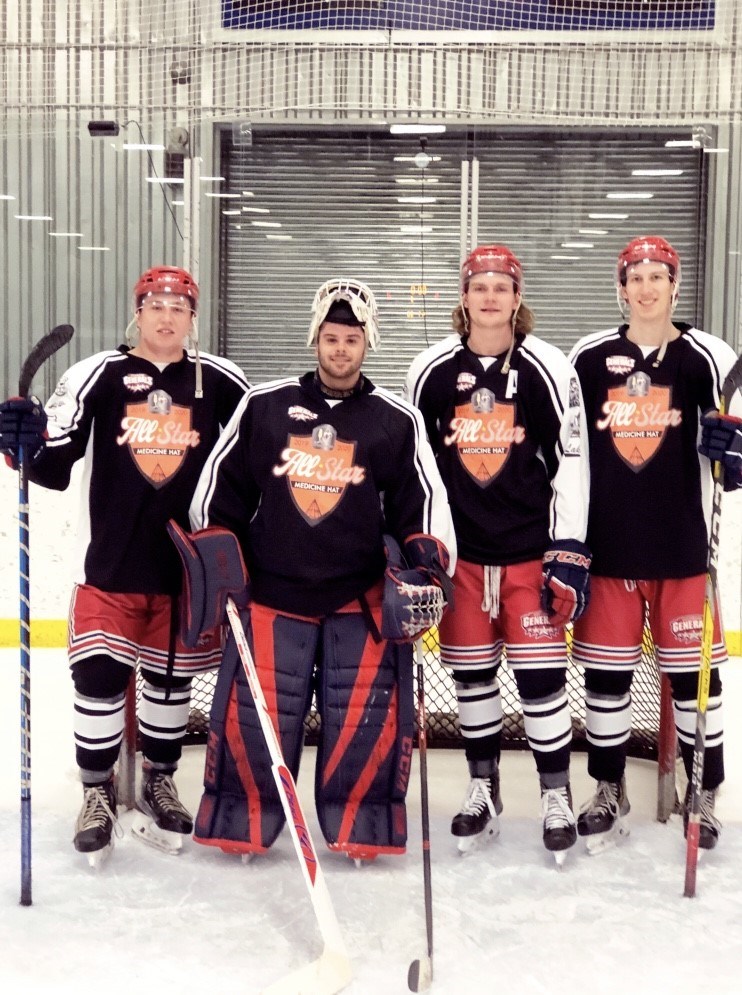 The Cochrane Generals were well represented at the HJHL All-Star game. Submitted Photo

The Cochrane Generals got back into the win column for the first time in 2020 with a 7-0 victory over the Ponoka Stampeders on Jan. 3, but several team members had the chance to showcase their talents during the Heritage Junior Hockey League's (HJHL) All-Star game on Jan. 5 in Medicine Hat.

Generals head coach Kurtis Jones and his staff coached a southern division all-stars team to a 5-2 victory that featured Gens team captain Brandon Aab, goaltender Erik Garber, forward Taylor Girard and defenceman Jordan Marks. Rookies Dean Olenyk and Patrick Forde, the top two leading scorers among rookie players in the league as well as the leaders in team scoring, had been selected to the south division's prospect team where they lost their game 6-4. It was the second appearance for Aab and Marks with Girard and Garber both making their first all-star game.

Girard was named an assistant captain for the squad while also picking up an assist in the game while Brandon Aab scored a goal. Erik Garber turned away every puck he faced except for one and Jordan Marks was solid on the backend, playing solid defence.

"It was a great experience," said Garber. "I think Medicine Hat did a good job with hosting everyone and with how they ran everything. The game was also really fun to be a part of, we got to play with some good players that we normally play against. It was just a fun experience overall."

Most players coming into an event such as this one would feel some nerves, but Garber said he and his teammates were calm, cool and collected heading into the all-star competition.

"I felt really good out there," Garber said when asked to judge his play against the league's best.

"I played the second half of the game and was able to get into a groove pretty quickly which is sometimes difficult when coming into a game cold. I didn't feel nervous at all out there, just enjoyed the moment."

With so many members of the Generals organization competing on a larger scale than what they're used too, the team's starting netminder felt like the group did a good job representing their hometown team.

"I think we represented the Gens in a great way. We had a big presence of Generals there," Garber said.

"From our coaching staff to Dean (Olenyk) and Patrick (Forde) getting a few points each in the prospects game as well as Taylor (Girard) and Brandon (Aab) each picking up a point with Jordan (Marks) and I playing solid on the back end, I think you can only take positives from the experience."

He also added that it proves just how well run the Generals organization is.

"It shows that we have one of the best programs in the league," said Garber who is now in his third season with the team. "When people come to league-wide events and see players with the Generals red helmet and pants making plays and standing out, they know exactly who we play for. We've built our program with fast and hard-working hockey players and I think that shows."

Garber also added that there was a good atmosphere in the building and said the league did a great job of putting on the event for players, staff members and fans of the league to enjoy.

"It was a fun atmosphere to play in. There was a good amount of people in the stands and they also had the game broadcasted on hnlive.ca which allowed people who couldn't make the trip down to Medicine Hat to watch as well," he said.

"With it being broadcasted, there were multiple cameras around the rink which was pretty cool to see and they had a spotlight with a fog machine for the player introductions at the beginning of the game. It was definitely something else to be part of all of that. It was very well put together."