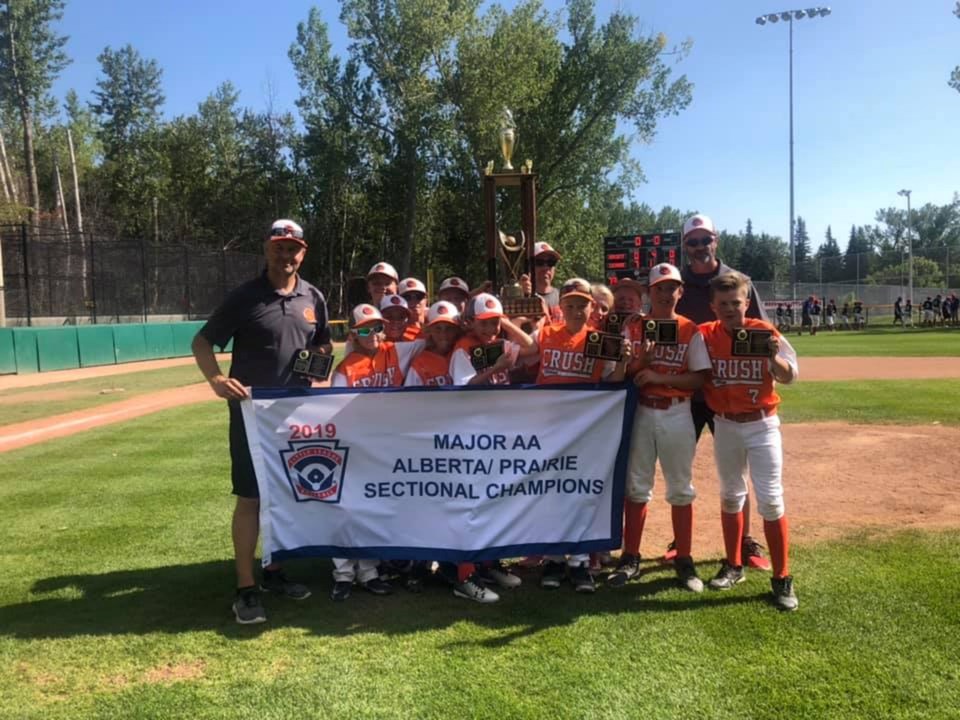 A dream season. This is a common phrase thrown around when trying to describe a championship victory in sports, but it may ring even truer with the Cochrane Major AA Peleton Tier 1 Crush baseball team after they walked away victorious in the AA Provincial Championships during the tournament that took place in Calgary Aug. 2 to 5.

After sweeping through their home tournament the weekend before, the Crush went to provincials primed and ready to take on all comers. They started off the tournament with victories over Calgary West, Lethbridge and Centennial while losing to Norcrest. The team defeated Calgary South in the semi-finals and avenged their loss to Norcrest in the final by beating them 7-0.

"I think that everyone was pretty excited with the result of winning the championship," head coach Corey O'How said. "Most of the kids have won (championships) before so I think that it was still exciting for them, helped them to remain calm, enjoy the moment and to have fun. The parents and coaches were excited for the kids because they deserved it and worked really hard to get there."

"We played four round robin games and had two really close games to start off the tournament, lost our third game which forced us to have to win our final round robin game where we got a really good pitching performance that pushed up to the semi-finals on Monday morning against Calgary South. We played them four times during the year with both teams winning twice ... we got some great pitching again and hit the ball really well which helped up win 7-2 and put us in the final Monday afternoon where we once again got another really solid pitching performance and managed to beat Norcrest 7-0 in the final."

The Crush were one of the favourites coming into the provincial tournament and managed to overcome the pressure to successfully finish off their season by being the best team in Alberta in their age category.

"Once again the kids did a great job with that. It helped that they've been in some championship games before ... I think we had a really good round robin minus that game against Norcrest where it seemed like nothing went our way and then come Monday they were just a different group of kids," O'How said.

"They were really ready to go and they played just amazing baseball. This year was pretty amazing, we had a really young group of kids compared to a lot of the other teams, we had a lot of underaged players and we had five first-years and four second-year kids which made it a little more special playing against teams with older kids on their roster. It's a great group of kids ... they enjoy being together and playing for one another."

O'How said it was very early in the season that he knew this Crush team was a close-knit group and could do something special.

"Early in the season, the first weekend in Airdrie we made it to the semi-finals and finals on that tournament," said O'How. "You could see the demeanor of the kids really change when the games started to mean something. We won that tournament and when the games started to mean stuff, the kids really found a new gear and that's when I knew that the kids would show up in the big situations."