"The fans definitely bring a lot of energy that we aren't used to, so playing at the Saddledome in front of your university, makes it so much more meaningful. Our games against the University of Calgary are always so intense but the Saddledome game always seems a bit more important."
0
Feb 14, 2020 1:25 PM By: Troy Durrell 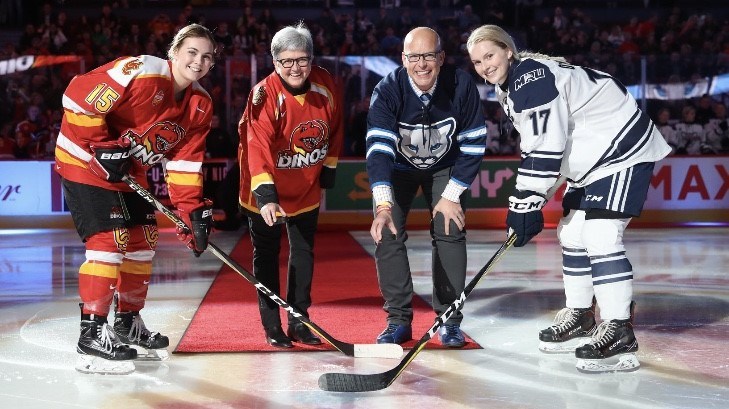 The Crowchild Classic is a well known yearly event that pits the Mount Royal Cougars and the University of Calgary Dinos hockey teams against each other in a doubleheader, that features both the male and female teams from their respective schools.

It's one of the most well-attended USports events of the year and the latest instalment that took place on Jan. 30 at the Scotiabank Saddledome featured four Cochranites on both teams.

Seper scored the Cougars only goal in a 4-1 loss to the Dinos while Gordon had a goal and an assist for the Dinos in a 5-4 double-overtime loss.

Seper is in her fourth-year while O'Neill, Hufnagel as well as Gordon are all in their fifth and final years of playing. She said taking part in the Crowchild Classic as a player never gets old.

"Not at all," Seper exclaimed. "Every time I get to play at the Crowchild Classic, I get the same nerves and it feels like I've never played in front of that big of a crowd before. It's definitely an amazing experience each time."

"The fans definitely bring a lot of energy that we aren't used to, so playing at the Saddledome in front of your university, makes it so much more meaningful. Our games against the University of Calgary are always so intense but the Saddledome game always seems a bit more important."

The fourth-year nursing student who has registered three goals and nine points over the course of the season, found herself in a good spot on the ice and tallied the Cougars' only goal during the Classic.

"It was awesome. I got a really nice pass from my linemate Breanne Trotter and was able to sneak it past her (the Dinos goaltender)," she said. "At the time we were down 2-0 so it was a good boost for the team."

Seper said the experience is made even better knowing that Cochrane has a healthy representation in the game and has had a large impact in each of the games over the last several years.

"It's nice being able to represent Cochrane and having the chance to do it with Daria and Kate as it's their last year," Seper said. "You always dream of being able to play in front of a crowd that big so hopefully little girls and boys in Cochrane realize that they can do it too."

"It shows the love Cochrane has for the game of hockey. Growing up, Cochrane was always very into hockey and had so many opportunities for us to succeed and develop."

Fellow Cougar Daria O'Neill echoed the same sentiment that Seper did when asked about the amount of players from Cochrane taking part in the spirited tilt.

"I think it's awesome that we had so many of us representing Cochrane on sucha big stage," O'Neill said. "It was definitely a proud moment. Especially for us girls playing at the later time (the women's game was played in the later time slot for the first time ever), I think it's so powerful for young girls in Cochrane or from anywhere, to see us out there competing."

"I also think it goes to show how supportive the hockey community really is in Cochrane. All of the coaches and volunteers who dedicate their time to coaching the younger generations really make a difference in the long haul. It's those positive minor hockey experiences that make us fall in love with the game and want to keep playing it for as long as we can."

Both the Cougars and Dinos are now preparing for the Canada West playoffs this weekend, with Mount Royal taking on the University of Regina while Gordon and the University of Calgary will play the Manitoba Bisons in a three-game-series.