Rendell now a part of the Oregon Ducks

A former Cochrane Generals alumnus is making a splash south of the border with the University of Oregon Ducks hockey team.
0
Jan 25, 2018 12:00 AM By: Troy Durrell 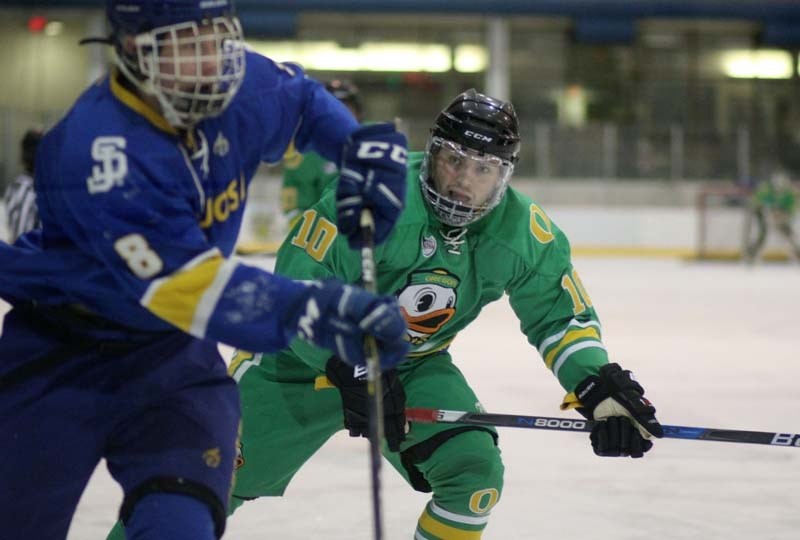 A former Cochrane Generals alumnus is making a splash south of the border with the University of Oregon Ducks hockey team.

Generals all-time leading goal scorer, Connor Rendell, has joined the Eugene-based school for the winter semester and is now wearing the green and yellow of the Ducks, who play in the American Collegiate Hockey Association (ACHA) Division Two’s Pac-8 Hockey Conference.

Rendell, who was a member of the Generals from 2013 through until last season, played in 107 regular season games for Cochrane, posting 90 goals and 85 assists for 175 points, good for 1.6 points per game.

Rendell’s best season with Cochrane was his last in 2016-17 where he set a Heritage Junior Hockey League (HJHL) record by scoring 54 goals while also adding 34 assists for 88 points on a Generals team that finished the regular season with a 33-7-1 record. The team fell in six games of the league championship series to the Red Deer Vipers, while also earning a silver medal at the Hockey Alberta provincial tournament championship game after a 5-4 loss to the Wainwright Bisons in overtime.

Rendell said he had been in talks with the team for a while.

“The coach reached out to me over the summer and asked if I wanted to play, of course I was super excited but he asked at the end of August. Trying to get all the steps done to apply for school, getting accepted and getting all the immigration paperwork done was very time consuming,” Rendell said.

“I deferred to the winter term and committed to going down to Eugene in December once we figured out all the paperwork and financial side of things.”

The local product added that he’s been adjusting well to his new surroundings in the short period of time he’s been on the Oregon campus.

“It’s been two weeks now so, so far so good. The school is beautiful and the professors seem to care about how their students are doing. I’m majoring in business so I’m taking a few different classes,” Rendell said.

“Business administration, philosophy ethics and a counselling psych class. I’m still adjusting … I think it may take the whole first term to get myself really comfortable in my surroundings. It’s a really big culture shock being back in school.”

“The experience as a whole should help me moving forward. Getting a degree, living far away from home I think will be a good maturing experience … and of course I want to enjoy hockey for as long as possible.”

The former General has played in two games so far for the Ducks, posting three goals and one assist in those contests, saying all the teams are competing to move up a division.

“There are a lot of good hockey schools in the Pac-8 and there’s quite the rivalry between us and the University of Washington (Huskies),” Rendell said.

“Each school is trying to improve so as a league we can all join the ACHA division one.”

Rendell said he’d never have been able to suit up for the Ducks had he not played with the local Junior B club.

“Playing for the Generals helped me a lot. The league got more competitive every year, which forced everyone to get into better shape and be more committed to the team,” Rendell said.

“When you play university hockey you practise more and get a lot more training time so it was a very good stepping stone to getting me prepared for this hockey and commitment level.”

The 11-10-2 Ducks have a pair of home games on Jan. 26 and 27 against the Eastern Washington University Eagles. Those interested in watching the former Generals star, can tune into the team’s live stream at www.oregonduckshockey.com/media