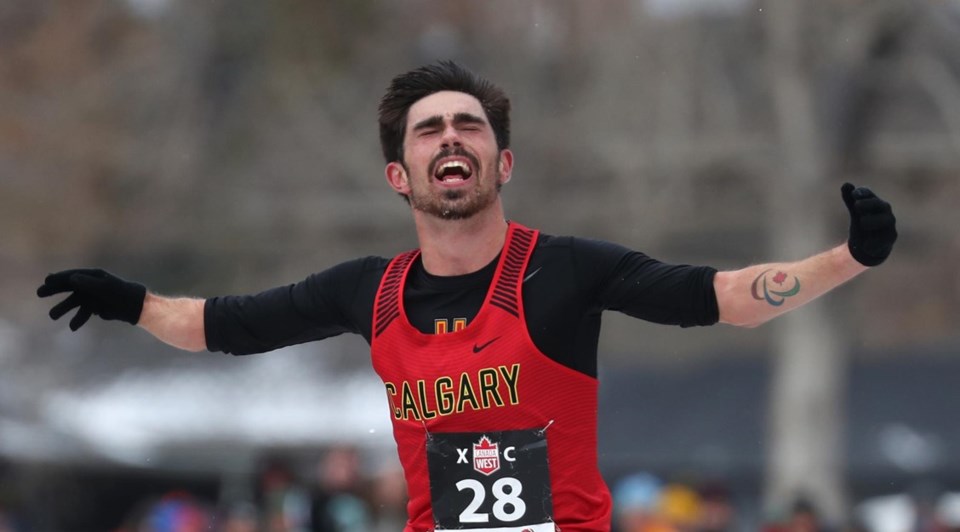 Cochranite Stefan Daniel and the University of Calgary Dinos men's cross country team overcame other teams from Western Canada as well as snowy conditions over the 10 km event, claiming gold and silver for the Dinos who won their third consecutive Canada West Championship on Oct. 26 in front of a rowdy crowd.

Daniel got off to a quick start while only extending his lead throughout the race and blew away the competition by securing the gold medal by more than 30 seconds with his time of 31:28:53 to a boisterous cheer from the home fans.

"Canada West couldn’t have gone any better for our team. Everybody ran well and we used the home course to our advantage. Individually, I was definitely not expecting to have the race that I did. I was confident. I could go top five but would need to really deliver in order to do that. It was (a blizzard) during the race which made the conditions tough for running," Daniel said.

"I went out fast and looked behind after 1 km and realized nobody wanted to come with me. Having a 30m lead, I had to decide to either slow up and join the big pack or keep pushing solo and make it hard for them. I decided to keep pushing and somehow I was able to hold on to the lead. We accomplished our goal as a team to defend our Canada West title, but we realize nationals will be a much bigger challenge. We are feeling ready going into nationals. We know we have a big target on our backs, but we’re confident in the group we have to perform when it matters."

"(This year has) been really consistent. I had my best ever triathlon season so I carried some good fitness into cross country season. We've never had a team this strong before, so I've been pushed more than I ever have in training and it's definitely paying off."

The Dinos cross country teams will begin to gear up for the 2019 U SPORTS Cross Country Championships on Nov. 9 at Queen's University in Kingston. Daniel said he has some goals in mind for what he'd like to achieve at the upcoming event.

First and foremost I want to do whatever I can to defend our national title," Daniel said confidently. "Individually, my goal coming into the season was to come top seven after coming 10th last year. After Canada West, I think top five is possible if I run well. I'll shoot for a medal but I'll be extremely happy with top five."

With the Dinos coming off their first national championship in cross country last year, Daniel said heading into this years event has a different feel for the team knowing that they have a target on their back.

"It feels very different than last year," Daniel said. "Last year we were coming in as the underdog and were predicted to come third. We knew we had an outside shot at the win, knowing we needed a couple of breakout races from a couple of the guys to do it. This year we are coming in as the favourites and everyone will be trying to hunt us down in the race. It'll be a different challenge, but we are so excited for it. After experiencing what it was like to win last year, we are all excited to chase that feeling again."