Tournament of Aces another huge success

The 11th annual Tournament of Aces took place up at the Links of Glen Eagles on Sept. 29 and it was one that celebrated a milestone for the tournament as well as a bit of change.
Oct 4, 2018 1:00 AM By: Troy Durrell 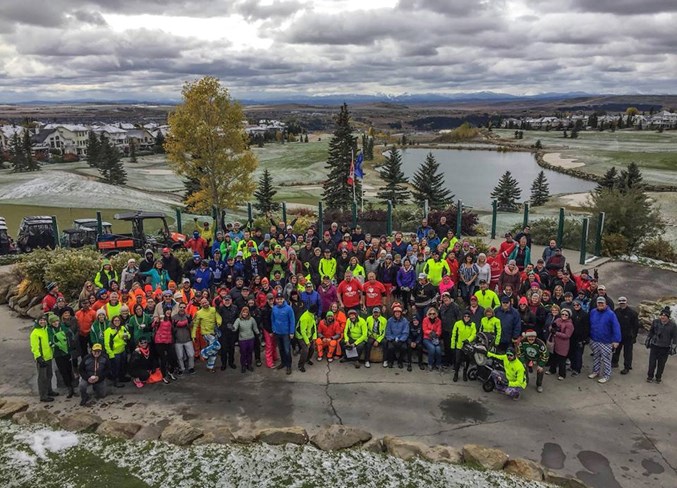 The 11th annual Tournament of Aces took place on Sept. 29.

The 11th annual Tournament of Aces took place up at the Links of Glen Eagles on Sept. 29 and it was one that celebrated a milestone for the tournament as well as a bit of change. "This was officially the change over year where the Rotary Club of Cochrane was handling the tournament with more mentoring from the Kimmett family with Kelly and Dianne being sort of involved in the background," said chairman of the Rotary Club Glen Gryzko. "We certainly needed their help when we got into the latter part of preparation for this and in the last month they were more than helpful. We have our partners in this from the Cochrane Search and Rescue, who were more beneficiaries in the past but they took on a bigger role and will do so in the future as well. "The main difference this year is the organization that was organizing and preparing for it." The tournament provides an opportunity for those involved to honour the memory of Lindsay Leigh Kimmett, who was killed in an automobile accident. Each year, funds are raised for several causes, and this year included the Variety Club of Calgary project to help redevelop the East End's Centennial Park playground to make it fully accessible for all children to enjoy, legacy funding to the Lindsay Kimmett Memorial Foundation, while the remaining 25 per cent is split between Cochrane Search and Rescue and the Rotary Club of Cochrane for organizing the event, which will go toward community projects. The tournament, which had just over 170 golfers, raised nearly $80,000 over the course of the event, similiar to last year's tally. "We had an excellent tournament despite the conditions. From a perspective of golfers that registered in advanced, we had a total of 184 registered golfers in which we had 170 approximately that actually took part in the event and enjoyed themselves immensely," said Gryzko. "They were there despite the conditions, braved the weather and had a wonderful evening, dinner and auction. What the tournament really shows is how Cochrane people have such an amazing support for this particular event and I think it's due to the fact of what it represents to the Cochrane community being the legacy of Lindsay Kimmett and the Kimmett family's willingness to turn tragedy into triumph in a lot of ways and do so much good in the community and everywhere else with their efforts." "At this point, numbers (money raised) aren't 100 per cent yet but approximately $80, 000 has been raised for the beneficiaries of the tournament and it was a milestone year but obtaining a total funding from the community on this project for the last 11 years, we've raised right around $1 million." "I think 15 to 20 per cent of the players this year were people that hadn't played in the tournament before and had comments about how much they enjoyed the tournament and that they were coming back next year. This tournament is starting to expand outside of Cochrane and into a wider area."