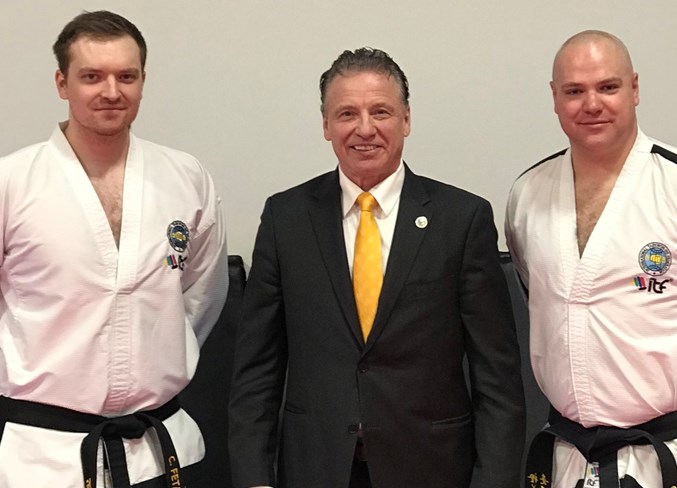 Trinity Taekwon-Do instructors Cameron Macdonald and Colin Fetaz put their skills to the test in order to move up the black belt ranks.

"As a black belt in Taekwon-Do, you don't test very often," Macdonald said. "You're supposed to wait the number of years of the degree that you have so Taekwon-Do is designed for those who pursue it, to be a lifetime of learning. This opportunity came up for both myself and Colin, who is currently my main associate instructor, our time was in for our current degree so we flew Master Norman in from Saskatchewan, he put us and eight others through a rigorous belt testing and I passed my test for sixth-degree with Colin passing in order to earn his fouth-degree black belt. Fourth degree is a really big deal, he's now truly deemed an instructor and not just an assistant as well as the uniform changes."

"I started this business (Trinity Taekwon-Do) in 2004 and he's my first, true, real black belt that I've produced. So it's a big milestone for him, myself and the entire club. It was special to do it together as well."

The duo said this accomplishment means a lot to them individually but also doing it together.

"It feels almost surreal," Fetaz said of achieving his goal. "It didn't really register until after. We spent all this time preparing for it and the work is done ... then after a few days, you get back into the dojang (training hall), back to training and then you fully realize what you've accomplished. It took a few days for it to hit me, but I'm ecstatic and it was incredible. All the work put in was truly worth it."

"From first to third (degree) you're an assistant instructor, but that didn't stop me from coming in and running classes, once you've hit fourth (degree) it's more of an instructor position. There are a few formalities that come with it like calling the instructor the right name in Korean while at tournaments and in the dojang, but for me, that hasn't changed much of my teaching schedule."

"Without the kids, there is no club and getting my fourth-degree, it's nice to have that certification and respect from everybody in the community. Things don't change day-to-day in the dojang, so it will be business as usual at Trinity Taekwon-Do."

"It's been so many years since I did a belt test that it was a little refreshing to bring those nerves and training," Mcdonald said of what he felt after successfully reaching his goal. "You've got to maintain your training but with this belt-testing, we really had to up our training. We were meeting more times during the week, over the weekend, before and after class to train."

"We did some training together because there were elements that we performed together as well as some things to perform individually. It was refreshing to go back to the drawing board and prepare myself for a fairly rigorous test. There's a lot to prepare, which I felt like I was and I had to work hard. I expect that from my students so I expect that from myself as well."