Cochranite Tyler Wong will be taking his talents over to the KHL with the Kunlun Red Star.
Jul 12, 2019 3:20 PM By: Troy Durrell 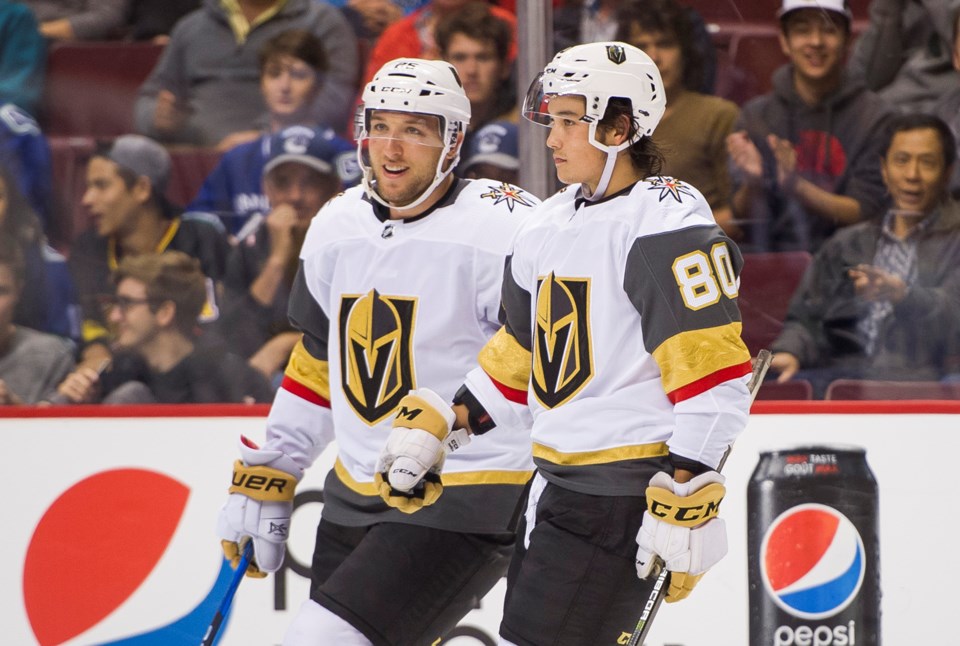 VANCOUVER, BC - SEPTEMBER 17: Tyler Wong #80 of the Las Vegas Golden Knights is congratulated by teammate Stefan Matteau #25 after scoring his third goal of the game against the Vancouver Canucks in NHL pre-season action on September 17, 2017 at Rogers Arena in Vancouver, British Columbia, Canada. (Photo by Rich Lam/Getty Images)

Cochranite Tyler Wong is packing up his bags and is headed to Russia ... well, kind of.

The 23-year-old local hockey star who suited up last year in the American Hockey League (AHL) with the Vegas Golden Knights affiliated Chicago Wolves, Wong will be taking his skills over to the Russian Kontinental Hockey League (KHL) and the Kunlun Red Star, a team based out of Beijing, China that joined the KHL in 2016.

"I'm very excited to get over there and start things up," Wong said of his chance to play with Kunlun. "They've tried to sign me for a year or two now and I felt that it was the best opportunity for me right now to progress as a player and showcase myself in a really good league."

Heading across the world to China could come as a culture shock to anyone, let alone a hockey player in their mid twenties. Wong said he is prepared for the challenge and will take the opportunity in stride.

"The team (Kunlun) has helped me a lot the last couple weeks in getting things set up," Wong said. "My wife is also coming with me so having her around will make life a lot easier as well."

"As for things I'd like to achieve, one of the biggest things they're trying to do over there is grow the game in China, so one of my goals is to help with that. Hockey wise, I'm just trying to continue to grow as a player. My goal is still to make the NHL so I would like to show that I can produce in this league and hopefully get another opportunity in the NHL when I come back."

Last season with the Wolves, Wong played in 68 games where he scored five goals and added eight assists for 13 points. The previous season, he split time between the Wolves and the Quad City Mallards where he combined for four goals and nine points in 60 games. And while he didn't get the chance to suit up with Vegas in a regular season game, Wong has the honour of scoring the first ever goal in Golden Knights' history when he finished with a hat trick in a 9-4 win over the Vancouver Canucks on Sept. 17 of 2017.

“It was unbelievable, just taking part in the organization’s first game was an honour," Wong said in an interview with the Cochrane Eagle after his record-setting night with the Knights. "Going into the game, I was a little nervous but the veteran players were awesome. They kept me loose and told me to be confident and not to worry. Once the game started the nerves went away."

Goal scoring has always been a strength of Wong's, dating back to his junior career with the Lethbridge Hurricanes. Wong played his entire junior career with Lethbridge from 2012 to 2017, where he finished with a total of 317 regular season games registering 143 goals and 155 assists for a total of 298 points along with 224 penalty minutes and a +12 rating. His best season came in his last where he racked up 51 goals and 109 points and also collected a team-leading 24 points in 20 post-season games, helping the Hurricanes to the Eastern Conference Championship Series for the first time since 2008.

Wong won numerous awards over the duration of his time with the Hurricanes including being named the WHL’s Humanitarian of the Year for the past two seasons.

Winning off ice awards has also been a common occurrence for Wong, as he was recently named the Wolves nominee for the AHL Man of the Year.

According to the Wolve's website, "The 23-year-old forward earned this honour for his unwavering willingness to be a positive force throughout the Chicago area. Wong joined the Wolves in 2017 with a reputation for eagerly donating his time and energy to multiple causes — he twice won the Western Hockey League’s Eastern Conference Humanitarian of the Year Award — and he has maintained his brisk pace with the Wolves while establishing his professional career.

"Never one to waste free time, Wong has been a leading light at every Wolves charity event in addition to spending hours helping with Feed My Starving Children and Bernie’s Book Bank. The 5-foot-9 Cochrane native also has made several visits to local libraries as part of the team’s long-running Read to Succeed program. Not only does his voice carry weight when he extols the virtues of recreational reading and the importance of setting and achieving goals, Wong’s personal story of how he ignored others’ doubts about his size to continue to pursue his hockey dreams makes an impact with the children he meets."