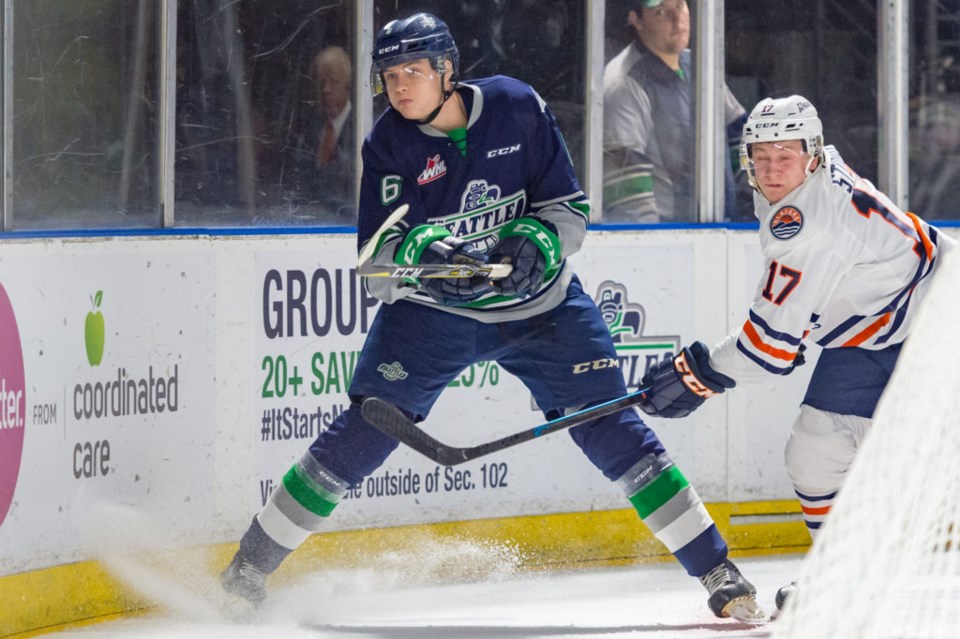 Tyrel Bauer went to the Scotiabank Saddledome a lot as a kid. Calgary Flames and Hitmen games were a common occurrence throughout his minor hockey league career before he finally got the chance to suit up and step on the ice of the arena he had attended hundreds of times when he and his Seattle Thunderbird teammates defeated the Calgary Hitmen 2-1 in Western Hockey League (WHL) action on Oct. 28.

Bauer played on the team's top pairing with partner Luke Bateman, where he registered one shot on goal, had two minutes in penalties and finished plus one on the evening.

So far this season, Bauer has played in 10 games with the 5-5-2 Thunderbirds, where he has zero points so far with 16 penalty minutes. Last season, the former 2017 second-round pick in the WHL Bantam Draft played in 64 contests, scoring two goals and adding 12 assists for 14 points to go along with his 91 penalty minutes and plus 17 rating in the plus/minus category.

During the WHL playoffs Bauer played in all six games for the T-Birds, registering one assist in Game 2 to go along with two penalty minutes and five shots on goal.

"Yeah it's a pretty special feeling," Bauer said of his first experience playing in the NHL rink closest to his hometown of Cochrane. "Growing up, we had season tickets to the Hitmen games, and would watch the Flames every now and again too. To be back in that rink playing my childhood team with tons of family and friends watching is something you don't forget."

As Bauer mentioned, he had his sister Nicole (his other sister Jenna is away at school in Kelowna) as well as his parents, Steve and Raelyn in attendance as well as many high school friends. The family made their way out to Seattle on a number of occasions as well as seeing Ty play in his first WHL game in Edmonton, almost two years ago to the day when he was called up during a 3-1 Thunderbirds victory over the Oil Kings on Nov. 2, 2017.

"It was very cool to see Ty play at the 'Dome, I am very proud of him and how far he's come," Nicole said. "We used to be season tickets holders (for the Hitmen), so to see him play against them was an exciting experience."

His parents echoed a similar message to Ty's oldest sister. "We've very proud of him. Watched him grow up a Hitmen fan, it was exciting to see him play against a team he used to idolize," Bauer's father Steve said proudly.

"It was such an exciting night," Raelyn said. "Several of his school friends came to watch as well as several of our friends that we met through hockey, and of course lots of family that haven't had a chance to see him play with Seattle yet. I'm sure he had some nerves at first."

Bauer will be back in western Alberta during the new year when Seattle will take on the Lethbridge Hurricanes and Medicine Hat Tigers on Jan. 3 and 4.